Bristolians are staging daily protests, after an 'Airbnb landlord' locks out a local queer cafe - The Canary 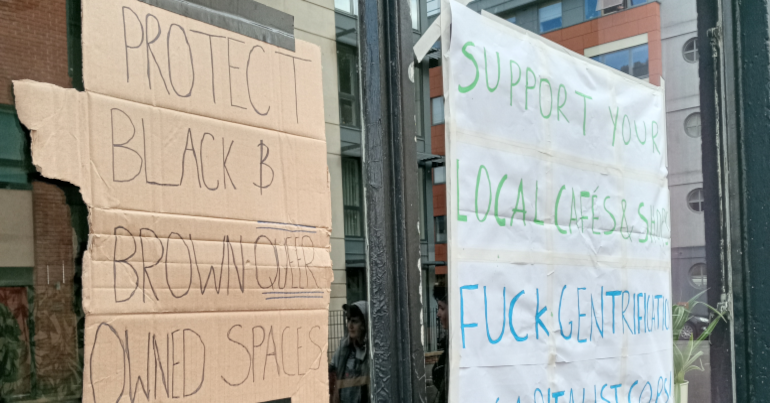 Local people have gathered every day for over a week to protest what they say is an illegal eviction of a local cafe in the St Paul’s neighbourhood of Bristol. Hidden Corner is a well loved queer cafe and bookshop which opened in May this year. On 4 October, the cafe’s landlord put a lock on the front door, preventing the cafe’s proprietors from gaining access.

What happened next is a sad reminder that our grassroots run spaces are under threat by powerful landlords, and an inspiring example of how a community can come together to fight back.

[on 5 October] I arrived at the shop. I didn’t know what was going on. There was a note in the window saying ‘to whom it may concern’… saying supposedly we’ve broken [the terms of Section 7 of our lease]. so he [the landlord] has illegally entered our premises, moved around some of our things and put some CCTV cameras up. We can’t get inside.

Khan told us that they had not broken the terms of their lease, as they had been consistently paying rent.

Hidden Corner told us that the landlord had even locked a lot of their property inside the cafe.

Khan has vowed to fight the eviction, and she explained why the cafe’s struggle is import for Queer, Trans, Intersex and People of Colour (QTIPOC) in Bristol. She said:

I just think its a real shame that another QTIPOC space is being threatened. It’s really important that we have our own spaces – where the staff and the people who run them are from the QTIPOC community, and not another cis white man.

A pattern of ‘intimidation and bullying’

Khan told us that her landlord – Thomas Flight of Presman Ltd – had been acting in an intimidating and bullying way toward the cafe. Khan said:

For the past few months we’ve been having threats from the landlords, we’ve been bullied by them. They’ve been trying to evict us on illegal grounds.

Khan told us that Flight also owns several Airbnb apartments above the cafe, and that the previous tenants had been moved out to make way for the lucrative holiday rental flats. Flight had reportedly demanded that his Airbnb guests should be given a discount at Hidden Corner.

It started off that they told us to give their Airbnbs – which are above here –  a discount. We said that we’re a new business and we weren’t able to give anyone a discount at the moment. They replied by telling us that we wouldn’t want to ‘be enemies with them’ and that they could ‘make things very difficult for us’.

After that, the landlords started to make problems for Hidden Corner. According to Khan:

They said that we had been operating outside of our licensing and our lease – which we haven’t – they said we had been serving alcohol – which we weren’t. We sell halal food, and halal and alcohol don’t really go together. Since then we got a solicitor involved and things died down for a bit,

We’ll ‘get the big boys round’

A while after the threats received by the cafe, the landlord demanded that Hidden Corner pay for a carpet and mattress which he claimed had suffered damage after a water leakage. When the cafe disputed it, Flight reportedly threatened to ‘get the big boys round’.

I was present when Flight arrived at the building on 5 October. I asked whether he would like to comment on what had been going on at Hidden Corner. Flight replied “no comment”, and then rudely told me to “go away”, waving a hand in my face.

Hidden Corner reported all of this harassment to Avon and Somerset Police. The Canary contacted the police for a comment. A spokesperson said that Hidden Corner’s allegations against the landlord “have been recorded and are under investigation”.

However, it appears that the police are much more willing to send their officers to protect the property of a rich white landlord than take Hidden Corner’s allegations seriously. During one of last week’s protests, Khan commented to a police officer – who had turned up after police reportedly received a call from the landlord’s employees – that:

When someone calls you from a position of privilege and power you come right away.

The reason so many people have turned up over the last week to defend Hidden Corner is that it provides a rare, radical space that is run for queer people and People of Colour. According to Khan:

We are a queer POC [People of Colour] space, all of the books we sell are predominantly by Black and Brown writers and queer writers

Here are some of the tweets sent by Hidden Corners Bristol supporters:

Resisting eviction at Hidden Corner Bookshop and Cafe. Landlord has chained the doors shut. Owners dispute the terms of the eviction and will be protesting today. #Bristol #Resist pic.twitter.com/U6Mm4OgExD

Stood outside Hidden Corner Cafe in Bristol where the landlord has unlawfully evicted the owners (my friends)#SaveHiddenCorner 1/ pic.twitter.com/5osiRgDs7O

Hidden corner cafe in St. Paul’s has been such an incredible space for local Bristol community. A queer poc ran bookstore, that locals use. They are facing an unfair eviction – by landlords with no connection to the community. @MarvinJRees I really hope this can be solved! pic.twitter.com/YrXDtKeTwb

If you are free in Bristol today then come to the Hidden Corner Cafe in St Paul's where the business owners have been unlawfully locked out and one of them wrongfully, and aggressively arrested. Queer, POC spaces like this are vital. @MarvinJRees – this isn't right! https://t.co/L0O8Tk8MQp

Protesters outside Hidden Corner Cafe tear down a banner put up by the landlord apparently claiming to "support LGBTQ + QTIPOC". The cafe exists as a queer space and the landlord has evicted the owners, the owners say illegally.#Bristol #HiddenCornerCafe #Resist pic.twitter.com/xn5X0vNRl0

Solidarity with Hidden Corner today. If you can’t make it down you can donate to support their legal funds https://t.co/ve9XJjKSGl pic.twitter.com/nyiqFf4Tmi

“I want this space to be safe again”

We asked Khan what she wanted to happen:

At the moment I want the chains off the doors, I want to go about my business  I want us to serve the community – which we have been doing – and I want this space back, I want this space to be safe again. I want people to be able to come in and read books and drink tea and coffee and eat cake.

Khan says the protests will continue until the landlord backs down:

I am going to be here every day until there’s no chain on that door, and the landlord comes to a reasonable agreement and sees that actually what he’s done is illegal.