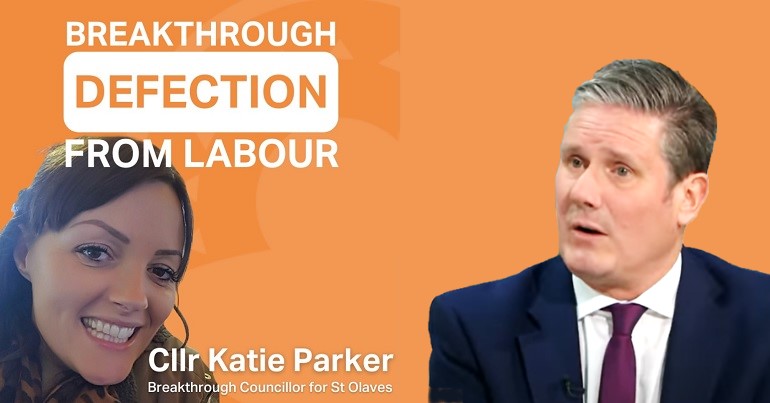 Another local politician has defected from Labour to a new party. They’re the second councillor to switch sides this year. And the ‘breakthrough’ party in question has its sights set on more seats in 2022.

As The Canary previously reported, the Breakthrough Party launched in January 2021. Alex Mays founded it. You can read all about Breakthrough here. Mays told The Canary:

In August, West Yorkshire councillor Samantha Cooper defected from Labour to Breakthrough. Now, a second councillor has joined her ranks.

Katie Parker is a town councillor for the St Olaves ward in Bury St Edmunds, Suffolk. Recently she’s been campaigning for a pay rise for NHS workers and over the lack of NHS dentists in her area. But Parker has now had it with the Labour Party. She said in a press release:

After being a staunch socialist my whole life and getting involved with local politics during the Jeremy Corbyn era, I have become incredibly jaded and cynical with all the mainstream political parties. I believe there is no alternative to a right-wing government anymore. I lost my passion and no longer felt that I fit in with the Labour Party.

I looked around at other groups but just concentrated on my council work- keeping the community at the heart of it all. This has worked, but I haven’t felt that same pride in who I represent as I did to begin with.

When I heard about the Breakthrough Party it was through a family member. I began researching it and it felt like the socialist party I needed and believed in. I absolutely pride myself on my integrity and being real due to my own past, and I liked what I read.

Parker doesn’t hide her past. She says she “struggled with drug addiction” when she was younger – ending up in prison and with “drug-related health issues”. After going to rehab in 2004, she went to university and started a career working in drug services and rehab units. She said:

I’ve learned that a big part of addiction is needing to belong and feeling part of a community is a huge part of this. I’ve started baby banks, fed children during school holidays, helped residents during the Covid crisis, helped bring the community together and a lot more in my two and a half years as a councillor.

My passion for this has never waned.

Parker now believes the Labour Party is not the right vehicle for progressive change. She said:

I want change and to build something different, and I believe that the Breakthrough Party can do this.

She will now serve her community under the Breakthrough banner.

So, what does the future hold? Breakthrough said in a press release that it:

plans to stand candidates in parliamentary and local government elections to challenge the political status quo and, in particular, the Labour Party’s abandonment of many of its core voters.

Two Breakthrough councillors is a good start to the party’s broader plan. And with various elections happening in 2022, it will be the perfect chance for Breakthrough to make more inroads into Labour territory.