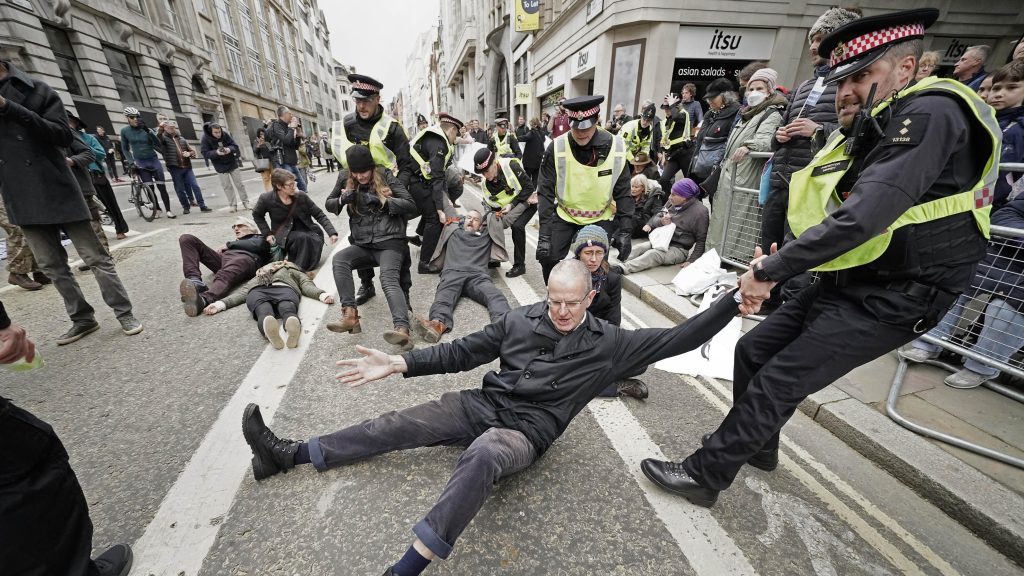 A number of people have been arrested after Extinction Rebellion protesters disrupted the lord mayor’s Show in London.

Footage shared on social media shows activists blocking the parade route in the City of London on the afternoon of 13 November. The disruption forced riders on horseback to stop and the new lord mayor’s golden state coach to come to a halt. Police officers were then seen dragging people out of the road while crowds who had lined the streets watched on.

Extinction Rebellion tweeted about the protest:

Today we disrupted the #LordMayorsShow in the City of London to declare that COP26 has failed, and demand an immediate end to fossil fuel investment https://t.co/8aArgJh1h9

The protest comes a day after Scottish first minister spoke of the difference between “survival and extinction”:

There’s still time in the final hours of #COP26 to make the outcome better and give us a chance of limiting global warming to 1.5 degrees – which for many across the world is the difference between survival and extinction. Let’s see the political will and determination to deliver https://t.co/DH9wHdJ9cg

We are aware of a group of protesters in the City today. City of London Police officers are engaging with the group to minimise disruption. A number of arrests have been made.

The lord mayor’s show dates to the 13th century and is the first official engagement of a new lord mayor. Following the disruption, the parade continued and Vincent Keaveny was sworn in at the Royal Courts of Justice as the 693rd person to hold the office.

Extinction Rebellion said it was trying to deliver “the Children’s Charter” to the lord mayor, which read:

We stand here the day after Cop26, which has failed to bring about the action necessary to tackle the climate and ecological emergency, to call on you to prioritise the next seven generations above the short-term greed that focuses on wealth accumulation right here in the City of London.

The organisation said the action was in response to the “failure” of COP26. Protesters dressed up wearing giant heads depicting prime minister Boris Johnson and chancellor Rishi Sunak, while others locked themselves together in the roads. Miranda Duncombe, a mother and member of the XR Families group, said:

Cop has failed to deliver the transformative changes needed to keep us at 1.5C of warming, a complete betrayal of our children.

If the City of London was a country, it would be the ninth largest emitter in the world. The City’s banks and asset managers provide loans and investments for the projects and companies that are killing us.

I am here for my children’s future. Our Government has failed to act to protect them. I’m calling for the City of London to divest from fossil fuels immediately for the children everywhere who are dying due to the climate crisis and those who will die in the future.

Anti-mafia journalist Roberto Saviano described the City of London as the ‘heart of global financial corruption’, according to the Guardian. It quoted him as saying:

If I asked what is the most corrupt place on Earth, you might say it’s Afghanistan, maybe Greece, Nigeria, the south of Italy. I would say it is the UK. It’s not UK bureaucracy, police, or politics, but what is corrupt is the financial capital. Ninety per cent of the owners of capital in London have their headquarters offshore.

The lord mayor of London serves as the elected head of the City of London Corporation and their terms last one year. The 2021 procession included full-size model elephants, Japanese drummers, and a horse-drawn bus. And the state coach is the oldest ceremonial vehicle in the world still in regular use, according to show organisers.