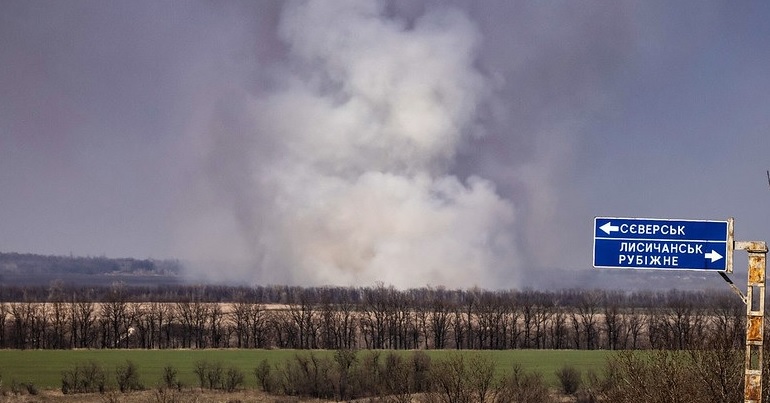 War is always an environmental catastrophe, and one we can ill afford in our age of climate and ecological crises. In light of this, the UN’s International Law Commission (ILC) is trying to strengthen legal protections for the environment during conflicts.

According to the Conflict and Environment Observatory (CEOBS), however, a number of countries are “reluctant” to do so. It seems that when it comes to countries agreeing vital steps to meaningfully address the environmental costs of war, might continues to trump what’s right.

As of 11 April, the UN said Russia’s invasion of Ukraine had caused 4,335 civilian casualties, with 1,842 people killed. As the Independent reported, the invasion has also significantly damaged and polluted various aspects of the country’s environment. This includes the air, waterways, and wild spaces, posing a threat to people and other animals. At the beginning of March, the Environmental Peacekeeping Association wrote an open letter warning of the “potentially catastrophic environmental impacts” of the aggression, which it said posed:

According to the International Rescue Committee, Saudi Arabia’s years-long war on Yemen had caused, by March, the death or injury of over 19,000 civilians from airstrikes alone. CEOBS has also highlighted that the conflict has negatively impacted its protected areas. This comes alongside the degradation of agricultural land and its waste management system. Poor waste management has implications for both human health and the environment. Yemen is also on the brink of a conflict-related ecological disaster due to roughly one million barrels of oil being sat on an unserviced tanker on its coast since the war began in 2015.

In short, war is never good for the environment. As Nnimmo Bassey, director of Health of Mother Earth Foundation (HOMEF), said:

War destroys infrastructure, destroys biodiversity and piles up toxic and specialized wastes. When I look at pictures of the carnage from warfare I see ecocide. I see a rapid loss of our collective humanity.

Moreover, the military-industrial complex is a significant contributer to carbon emissions. A 2019 study, for example, found that the US military was the 47th largest global emitter of greenhouse gases based on fuel usage alone.

Bassey also pointed out that “carbon emissions from the machines of war” and emissions resulting from military actions, such as bombing fossil fuel storage facilities, aren’t:

accounted for as emissions from the combatant nations.

Efforts to address the climate and biodiversity crises must be comprehensive. Given the environmental impact of war, it merits inclusion in efforts to tackle them. The ILC’s project – titled Protection of the environment in relation to armed conflicts – aims to firm up combatants’ obligations and would go some way towards addressing this impact.

UN efforts to strengthen the legal framework to protect the environment during war began in 2009. The ILC took up the torch in 2013, and has established 28 draft principles on the matter. CEOBS has explained that this strengthening involves:

The principles include issues such as the protection of indigenous lands, states considering the environment when deciding what is proportionate and necessary military action, and corporate liability in conflict zones. The principles span conflicts’ lifecycles as a whole. This means before, during and after war, and both international and internal conflicts.

Humanitarian Law and Policy highlighted that, while the principles aren’t likely to culminate in a treaty, the UN General Assembly is expected to adopt them in the autumn. Widespread support of the standards among UN member states is seen as key to securing their successful implementation.

According to CEOBS, however, there’s “considerable reluctance” from some countries to strengthen and codify the rules. In March, it analysed written responses to the ILC’s work from 24 governments in a feedback round in 2021. The observatory found that “many of the principles face serious opposition from states”. Those focused on rules during conflict, rather than before or after, faced “particular criticism”, it said.

CEOBS named Canada, the US, Israel and France specifically as raising “serious objections” to the project. Most of these are countries whose involvement in conflict isn’t typically on their own soil. This means that the immediate environmental impacts of their militarism, such as pollution and degradation of natural spaces, doesn’t afflict them but civilians in the places they target.

However, as the climate crisis has shown, there are worldwide – albeit heavily imbalanced – repercussions of environmentally-damaging actions because we live on a shared planet.

Russia wasn’t among the nations that offered feedback on the ILC project in 2021. However, CEOBS has highlighted that its previous statements indicate it’s satisfied with the status quo. It’s not hard to see why it favours the way things currently are. As Open Democracy reported, although the International Criminal Court (ICC) could theoretically prosecute a state over launching an attack that it knew would cause “widespread, long-term and severe damage to the natural environment”, it never has.

CEOBS’ research and policy director, Doug Weir, has described the ILC project as:

the biggest step forward in legal protection for the environment in conflicts since the 1970s.

For the many countries looking to inhibit Russia’s ability to wage destructive wars, it would arguably be a good idea to back it fully. However, as Weir told Open Democracy, some influential countries, including the UK, have routinely challenged principles of international humanitarian law related to the environment:

because they want the freedom to use nuclear weapons.

In essence, the status quo isn’t just Russia’s preference. Other nations also favour keeping things the way they are. They don’t want environmental concerns to interfere with their ability to wage war either.

Ring-fencing war in this way is out of step with our times. While civil society is getting behind efforts to widen protections for the natural environment, such as the push to make ecocide a crime prosecutable at the ICC, some nations are effectively trying to preserve the destructive status quo. This will make tackling the climate and biodiversity crises harder in multiple ways, as HOMEF director Bassey highlighted:

War takes away finance that could have been used for climate change mitigation and resilience building efforts. It diminishes and sometimes erases capacity of nations to withstand the ravages of global heating.

Highlighting the media’s role in making the public aware of the climate implications of war, she told The Canary that – aside from detailed stories by climate journalists – there have been:

almost no mentions in the mainstream press of the ways these developments might make global heating better or worse.

As Guenther stressed, this is indicative of a wider issue with the media:

still failing to connect the dots between human activities and the accelerating climate crisis.

She argued that “we need sustained pressure” on news executives, who fear that climate reporting “will alienate their fossil-fuel and automotive advertisers”, to let journalists “keep the climate crisis in the foreground of the stories they’re reporting”. News executives in New York City will feel that pressure on 15 April, with direct action planned at their media offices.

The End Climate Silence founder characterised the media’s failure to “connect Putin’s war to the danger of climate change” as “inexcusable”, in light of the Intergovernmental Panel on Climate Change’s (IPCC) recent report. As the Union of Concerned Scientists said, that report concluded that “sharp cuts” in fossil fuels and emissions are an immediate and urgent priority if the world is to have any hope of keeping global warming in line with the Paris Agreement goals.

NASA climate scientist Peter Kalmus, who is on the End Climate Silence advisory board and was recently arrested while protesting climate inaction, summed up the IPCC report’s findings:

Brief summary of the new IPCC report: We know what to do, we know how to do it, it requires taking toys away from the rich, and world leaders aren't doing it.

Meaningfully addressing the implications that war has for the environmental emergencies we’re living through is another thing a number of world leaders aren’t doing. Conflict has devastating consequences for people, other animals and the environment. Bassey described it as an “evil distraction” that “eclipses” the increasingly dire warnings of the IPCC and “commonsense”.

Action on the climate and biodiversity crises must include tackling the scourge of war, and putting the brakes on the military-industrial complex that enables it. If world leaders fail to do so, they are prioritising might over what is right, and what is essential to secure a liveable planet.