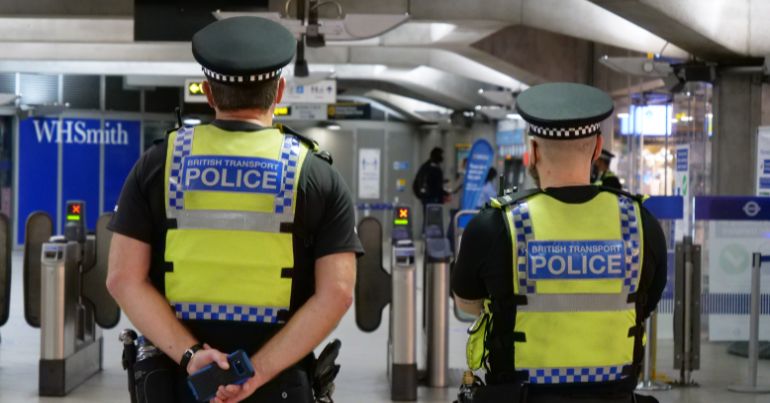 Bristol Copwatch founder John Pegram alleges that police forces have breached his data – held on the police national computer (PNC) – numerous times. As reported by the Canary in February, Pegram seeks to take Avon and Somerset Police to court on the grounds that the force is in breach of data protection laws. He now also intends to develop a case against the British Transport Police (BTP) due to the force storing false information regarding gunshot residue on his possessions.

Pegram is a longstanding anti-racist and anti-fascist campaigner, and founded grassroots police monitoring group Bristol Copwatch in 2020. He feels that police are targeting him due to his activism, as well as his identity as a mixed-race Black man. He’s concerned that police forces are not only storing but also sharing his inaccurate criminal records data, resulting in increased surveillance and over-policing across the country.

Regarding the impact of the force’s abuse of his data protection and privacy rights, he told the Canary:

In terms of trauma – they’ve done a lot of damage.

John’s case highlights Netpol’s long-standing concerns about the way inaccurate information retained on secretive police databases can have alarming real-world consequences. In John’s case, the wrong details on police records reinforces the stereotype of black communities as violent that is so prevalent in institutionally racist everyday policing.

Indeed, Pegram’s case fits into wider patterns of the police’s surveillance of communities of colour through initiatives such as the Metropolitan police’s discriminatory gangs matrix. Established in the wake of the 2011 uprisings, the gangs matrix is a database which holds the personal data of people who the Met perceives to be ‘gang’ affiliated. It excessively and disproportionately targets young Black people. By 2017, 78% of people on the matrix were Black, despite just 27% of people convicted of serious youth violence offences being Black.

Following a legal challenge by civil liberties organisation Liberty, the Met conceded that the way the gangs matrix currently functions is unlawful. This is on the grounds that it discriminates against Black people, and breaches people’s right to a private and family life by sharing data with third parties such as the Home Office, local authorities, and the Department for Work and Pensions (DWP). Following Liberty’s challenge, the Met police agreed to redesign its matrix. And in October, Met police chief Mark Rowley removed the names of over 1,000 young people who the police perceive to pose little to no threat of violence from the database.

Pegram suspects that the police have a “vendetta” against him, and have made his life difficult due to his longstanding involvement in anti-fascist and anti-racist campaigning across the country, as well as his grassroots community activism with Bristol Copwatch.

Pegram explained that because of his work with Bristol Copwatch, he understands the extent to which police target activists, and particularly people of colour. While speaking with the Canary, Pegram highlighted parallels between his own experience and that of Bristol race relations adviser Ras Judah. Judah is a Black Caribbean community elder who Avon and Somerset police repeatedly harassed and tasered in 2017 and 2018. His experience of violent and racist policing in Bristol is depicted in a new documentary, I am Judah.

Pegram is concerned that Avon and Somerset Police has shared intelligence on him, resulting in “racist policing responses” by other forces such as the Met and BTP.  He claims that other forces have infringed data protection regulations when collecting and handling his data, as well as his right to a private life.

Pegram accused one BTP officer of “unsafe and racist” behaviour during his arrest and detention in 2019. Pegram told the Canary that while officers detained him in a police van, he voiced concerns about his racist treatment by officers, as well as the handcuffs being secured too tightly. According to Pegram, one officer responded by saying:

I’ve not had to wait that long for a race card in a long time.

The next person to beat that I’ll tell them about you. 40 minutes. You’re a hero to me.

Pegram told the Canary that he found the experience to be “upsetting”, and characteristic of the police’s “discriminatory, institutionally racist approach”. BTP’s Professional Standards Department is currently investigating Pegram’s complaint regarding the arrest.

Pegram stated that the BTP also “overstepped the mark” when processing his belongings following his arrest. Pegram suspects that the force sent his confiscated keyring to a crime scene investigation team. He suspects this because his property is recorded under the category of “Investigative samples/forensics – CSI Trace: Gun shot residue from CSI trace” on the force’s database.

Responding to Pegram’s complaint regarding this, a member of the BTP’s data protection team maintains that “there were no forensic actions undertaken in relation to the item”. They state that the force likely categorised Pegram’s property by mistake while transferring criminal records data from one management system to another. The force has not yet updated Pegram’s record to reflect this. However, Pegram believes that it is “unlikely that it was done by accident”.

Either way, by altering Pegram’s criminal record without the legal grounding to do so, and failing to change his record to reflect the truth, the force could be breaching data protection regulations.

Pegram is concerned that the inaccurate marker on his record could trigger further unfair treatment by police. He told the Canary that it implies to police that he’s “the sort of person that goes around carrying carrying a gun”. He’s concerned that this information will be shared between forces, and may impact future interactions with police. This could manifest in further surveillance, the excessive use of force, and encounters with “the sharp end of the armed police”. He told The Canary that this “is creating a lot of trauma and a lot of distress” for him.

Pegram hopes to take legal action against the BTP regarding its potential breach of data protection regulations.

On the path to justice

Pegram told the Canary that through his experience, he has learnt that police “can say whatever they want about people” by holding inaccurate information on internal systems. He added that through these methods, police can “effectively ruin people’s lives if they want to”. Pegram’s concerns are heightened as the government seeks to increase police powers through cracking down on our right to protest.

Although the ongoing ordeal has been “traumatic” and “stressful” for the activist, Pegram feels hopeful that he is now on a path “towards some sort of justice”.

Regarding his case against Avon and Somerset Police, Pegram told the Canary:

It’s not really about the compensation. It’s more about holding the police to account and ensuring they get the message they can’t do this to people. [9:39]

In February, Blowe told the Canary:

It has taken John’s enormous persistence to discover the false data that means he is routinely targeted and harassed by the police. Now, hopefully, he will raise enough funds to finally start to clear his name.

Pegram is raising funds via CrowdJustice for the initial stages of his claim against Avon and Somerset Police. He is represented by Bindmans LLP.