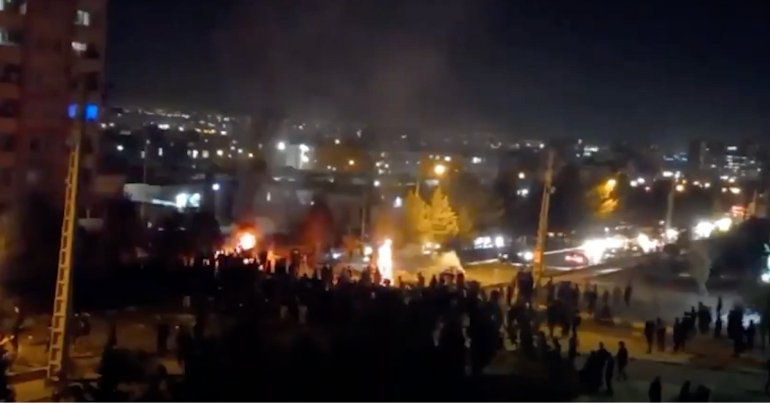 On 18 November, protesters in Iran chanted anti-regime slogans at the funeral of a young boy whose family say was killed by security forces.

Hundreds flocked to the city of Izeh in southwestern Iran for the funeral of 9-year-old Kian Pirfalak. Footage posted by the Norway-based Iran Human Rights (IHR) and monitor group 1500tasvir has showed as much.

His mother told the funeral ceremony that Kian was shot on Wednesday by the security forces. However, Iranian officials have insisted he was killed in a “terrorist” attack carried out by an extremist group.

According to a video posted by 1500tasvir, Kian’s mother said:

Hear it from me myself on how the shooting happened, so they can’t say it was by terrorists because they’re lying.

Maybe they thought we wanted to shoot or something and they peppered the car with bullets… Plain clothes forces shot my child. That is it.

Ridiculing the official version of events, the protesters chanted: “Basij, Sepah – you are our ISIS!” according to a video posted by IHR. The Basij is a pro-government paramilitary force. ‘Sepah’ is another name for Iran’s feared Revolutionary Guards. ‘ISIS’ is an alternative name for the extremist Islamic State (IS) group.

“Death to Khamenei,” they shouted in another video posted by 1500tasvir, referring to Iran’s supreme leader Ayatollah Ali Khamenei.

Opposition media based outside of Iran said that another minor, 14-year-old Sepehr Maghsoudi, was also shot dead in similar circumstances in Izeh on Wednesday 16 November.

Funerals have repeatedly become flashpoints for protests in the movement that started after the 16 September death of Mahsa Amini. Mahsa had been arrested by the Tehran morality police.

Kian Pirfalak, nine, and Sepehr Maghsoudi, 14, are among at least 56 kids killed by Iranian forces working to crush Iran’s 2022 Revolution.

IHR also said that anti-regime slogans were chanted at the funeral of Aylar Haghi in the northern city of Tabriz. Haghi was a young medical student whom the activists say was killed in a fall from a building. The fall was blamed on the security forces.

A number of human rights groups have expressed extreme concern at the treatment of protestors. Earlier this month, Human Rights Watch reported that they had:

documented security forces’ unlawful use of excessive or lethal force including shotguns, assault rifles, and handguns against protesters in largely peaceful and often crowded settings in 13 cities across the country.

On 6 November, in blatant violation of the separation of powers, 227 members of Parliament called on the judiciary to act decisively against people arrested during the protests and to carry out punishment carrying the death penalty.

The community of states have a moral obligation to stand with the people of Iran and not to remain silent in the face of such blatant violations of fundamental human rights and crimes under international law.