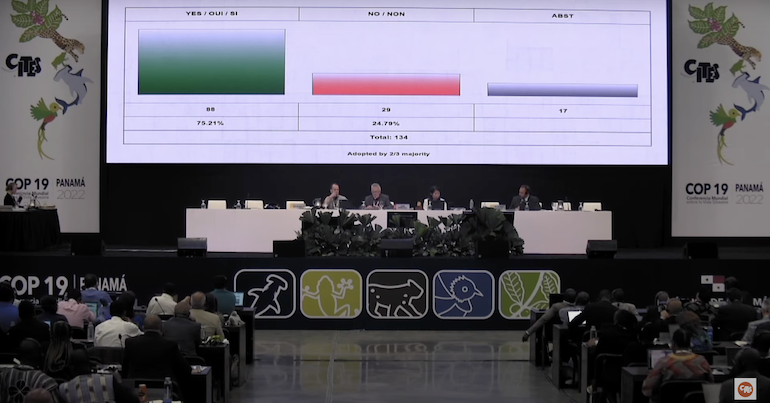 In a momentous move at the World Wildlife Conference, participant countries decided to provide trade-related protections to not one but two families of sharks on 17 November. Shark species desperately need safeguarding – overall, their populations are nosediving. Many sharks, along with rays and chimeras, are at risk of extinction. Overfishing is the primary cause of their demise.

The official name of the conference is the Convention on International Trade in Endangered Species of Wild Fauna and Flora’s (CITES) conference of the parties (CoP19). This two-week long event brings together governments to make decisions that will determine the fate of hundreds of species.

The decisions are preliminary, and the parties – meaning countries – need to confirm them later on in the conference. But that hasn’t stopped shark advocates from celebrating the win for the threatened marine dwellers.

A game-changer for sharks

The success of the proposals on providing protections for the sharks mean that CITES is on course to add them to its list of Appendix II species. The body regulates the international trade in wildlife and lists the species it oversees in three appendices. These listings ostensibly relate to how at risk the included species are, and the trading rules differ accordingly.

It’s important to emphasise, however, that CITES-listed species are generally still subject to trade and exploitation, with allegations of illegality, corruption, and fraud spotlighting the body’s inefficiencies.

A number of advocacy groups took to Twitter to celebrate the decisions:

Fantastic news for sharks! The proposal of Panama at #CITESCoP19 to list all requiem sharks (including the blue shark) in Appendix II has just been approved!🤩 Plenary confirmation is required, but we hope for the best! What a game-changer for the global conservation of sharks!🦈 pic.twitter.com/sStwgjNZKc

🦈🎉 We hoped so much – and today got this phantastic result: Inclusion of all requiem #sharks in CITES Appendix II agreed (although confirmation in plenary is needed). Even blue sharks included💪
Congratulations to @EU_ENV & many others.#CITESCoP19 #Overfishing #SaveOurOceans pic.twitter.com/Gi1mPqI61D

In a statement after the vote on requiem sharks, senior director of wildlife for Humane Society International, Rebecca Regnery, also said:

CITES is the best chance we have to address the ravaging of shark populations throughout the world’s oceans for the shark fin trade. This vote indicates how many countries realize the extreme threat this trade poses to sharks and rays and to healthy oceans.

The fishing industry targets sharks for their body parts, such as their meat and fins. According to the Marine Stewardship Council, a handful of countries dominate the sales side of the trade. These are the US, Spain, Mexico, Indonesia, and India. Most of the consumption of sharks happens elsewhere though, with the largest importers of meat being Italy, Spain, Brazil, and Uruguay. Countries in East and Southeast Asia are the primary destination for fins.

The blue shark makes it through

The decision on protecting requiem sharks – covering 54 species in all – included the blue shark. This is the “the most heavily fished shark in the world”, according to Shark Stewards.

Some #CITESCoP19 parties may argue that #bluesharks aren't threatened, but no population has sustainable catch limits and it remains the most caught pelagic shark in the Ocean. Something has to change… 🦈 pic.twitter.com/64UShEypBy

As the Canary recently reported, the blue shark is near threatened, meaning that protection could help to limit any further drift of the species towards extinction. But as a major target of the fishing industry, its inclusion was among the most hotly contested elements of the proposal on the requiem family. Unsurprisingly, the debate and vote were heated, with strong opposition to the inclusion of all the family from Japan in particular.

#CITESCoP19 Committee I discussion on family-level listing proposal for requiem #sharks as heated as was to be expected. So far 1 friendly amendment accepted, 2 additional amendments to reduce scope of proposal made. More on next steps below. Watch here:https://t.co/vEVqQarywP

But ultimately, the proposal passed, backed by 88 parties. The World Conservation Society’s Luke Warwick explained what the decision on requiem sharks broadly means:

Before this decision around 25% of sharks subject to the fin trade were protected. With this about 70% of sharks will be protected and countries will have to take measures for proper management.

Another proposal to protect the guitarfish family, which are rays, also succeeded on 18 November. This strengthens safeguards for Chondrichthyes – the vertebrate class sharks and rays belong to – further still.

Over the past 420 million years or more, sharks have proven themselves to be survivors, making it through a number of major extinction events on Earth. But modern humans, who have only walked the earth for around 300,000 years, have stretched sharks’ resilience to the limit.

If these decisions turn out to be the game changer for sharks that many hope, perhaps they stand a fighting chance of making it through the Anthropocene, aka the era of human impact.