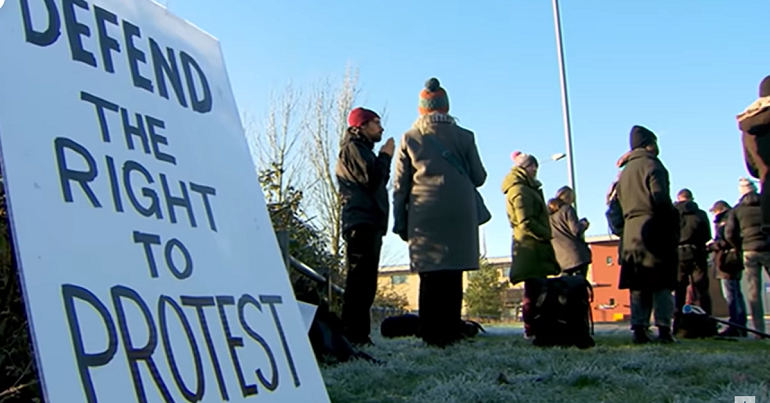 As The Canary previously reported, justice minister Dominic Raab has introduced a British Bill of Rights (BBR) to replace the Human Rights Act (HRA). The wide-ranging bill will affect deportations, protests, access to justice regarding human rights breaches from overseas military/peacekeeping operations, and much more.

But the cross-party Joint Committee on Human Rights (JCHR) has identified a number of procedural and other flaws in the bill. The committee has also made it clear that Raab neglected to fulfil the requirement to seek the early consent for the bill by the devolved nations’ legislative bodies.

The JCHR has written a letter to Raab accusing him of not addressing a number of concerns about the bill raised by parliamentary committees. The letter says:

The Government’s Bill of Rights does not reflect what the Government has heard from Parliament’s committees, from its own independent review, nor from its consultation exercise.

Those committees include the Public Administration and Constitutional Affairs Committee, the Justice Select Committee, and the House of Lords Constitution Committee. According to the JCHR, this “calls into question the integrity of the whole consultation process”.

Provisions affect us all

The JCHR adds: “Our view is that the Bill would lead to an unfortunate regression in rights protection”.

Indeed, the bill affects us all.

For example, with regard to the European Convention on Human Rights [the Convention], the JCHR says:

The Bill [of Rights] will repeal section 3 HRA, which requires legislation to be read compatibly with Convention rights so far as it is possible to do so.

Basically, that would mean the role of the Convention and its articles is weakened in the UK context.

The JCHR further claims that the repealing of section 3 of the HRA has:

the potential to affect millions of people in the UK: those in hospitals, in care settings, those dealing with local authorities, in education, in  detention settings or in social matters. Indeed, it will impact upon anyone who deals with public bodies and will likely disproportionately impact those who are the most vulnerable in society.

Ignore the name of this new legislation. It is a rights removal bill, and it will leave us all the poorer

Clause 20 changes the test for compliance with Article 6 ECHR (right to a fair trial) in a deportation case from “flagrant denial of justice” to “nullification” of the right.

In other words, the argument that someone should not be deported (or extradited) because they may not receive a fair trial elsewhere would no longer be valid.

To take one example, currently WikiLeaks founder Julian Assange is seeking to appeal extradition to the US. It’s possible his appeal would argue that he should not be extradited to the US because he wouldn’t get a fair trial there. If that appeal is heard after the BBR is enacted, it could affect his rights under the Convention’s Article 6.

UK armed forces above the law

Furthermore, the JCHR comments on how:

Clause 14 [of the BBR] introduces a total ban on access to justice in respect of human rights breaches arising from overseas military/peacekeeping operations. This would impact on the ability of members of the Armed Forces, their family members, and innocent civilians to seek justice and accountability for human rights violations.

The Overseas Operations Act also intends to stop investigations into alleged crimes by UK troops. When combined with the BBR, it indicates a downward spiral.

Back in August 2020, The Canary reported on claims that UK authorities had covered up hundreds of war crimes in Afghanistan and Iraq. A BBC article revealed evidence of what two former officers described as a “deliberate policy” to kill unarmed civilians.

But the Overseas Operations Act and the provisions in the BBR will make it difficult, if not impossible, to seek justice for human rights breaches committed by UK armed forces.

Further, the BBR wants to replace “freedom of expression” with “freedom of speech”. The JCHR argues that:

the commitment to a more restrictive “freedom of speech” rather than to “freedom of expression” appears to be an attempt to deliberately minimise elements of the right protected under Article 10 ECHR – most obviously the right to protest.

This change in emphasis is important, as it equates to a restriction on protests. That restriction is complemented by more restrictions on protests via the Police, Crime, Sentencing and Courts Act and the Public Order Bill.

Yet Raab has criticised restrictions on protests elsewhere in the world, such as Belarus and Myanmar, without any regard for the abject hypocrisy of his position.

Moreover, on procedural matters, the JCHR refers to the Sewel convention and points out that:

there are two limbs to the Sewel convention which provides that the UK parliament will not normally legislate with regard to devolved matters without the consent of the Scottish Parliament, Northern Ireland Assembly and the Welsh Senedd.

In this respect, and based on advice from legal experts, the JCHR adds:

The Government should not proceed [with the bill] without the consent of the devolved legislatures.

While the Sewel convention is not legally binding, the UK government is expected:

to consult with the devolved administrations early in the process, to ensure that devolved views are taken into account.

So once the BBR had been introduced in parliament, the legislatures in Edinburgh, Cardiff and Belfast would need to publish a memorandum of consent. Prior to the final amendment stage, the devolved legislatures would then grant or withhold their consent of the bill in part or whole.

But by ignoring that convention, Raab has signalled his contempt for the devolved nations.

It’s apparent from the letter that the Westminster government has not followed the Sewel convention, despite the likely fallout. There are also many other concerns that appear to render the bill unworkable.

The JCHR makes it clear that, in its view, the BBR is not fit for purpose, saying:

we believe the Government has failed to make the case for repealing and replacing the HRA with a Bill of Rights in the form proposed.

However, the government has a tendency to ignore such criticisms, even if they might be as damning as they are in this case.

Moreover, the bombardment of recent legislation aimed at massively restricting our rights appears relentless, with the overall aim of criminalising dissent.