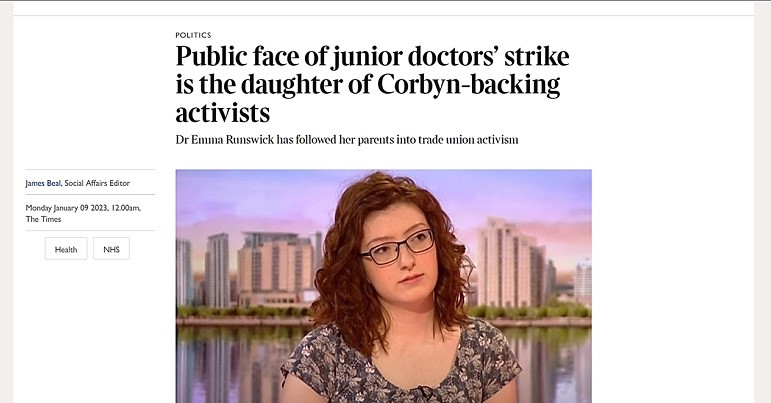 Rupert Murdoch-owned the Times has run what it thinks is a hit-piece on a senior British Medical Association (BMA) member. The article is a clear piece of anti-strike propaganda. It frames the medical professional as the “daughter of Corbyn-backing activists”. This right-wing catnip comes as junior doctors are looking likely to strike – except the story isn’t new. The piece was actually first published in December, with the Times rehashing it now to maximise the damage to the BMA.

Sky News reported that on Monday 9 January that the BMA started balloting around 45,000 junior doctors over strike action, for the first time since 2016. As Sky News noted, the potential industrial action is over the 26.1% real-terms cut to junior doctors’ pay since 2008. It reported that:

If they reach the 50% ‘yes’ threshold, junior doctors – any doctor below consultant level – will begin a 72-hour “full walkout” in March.

They will not provide emergency NHS care during the strike and trusts will need to arrange emergency cover to ensure patient safety, the BMA said.

The BMA junior doctors’ strike would come on top of the nurses and paramedics who have also been taking industrial action. So, enter the Times to ensure its right-wing readers positively froth at the mouth over the thought of workers using their legal right to strike after nearly 15 years of pay restraint.

The Times took aim at Dr Emma Runswick. She is the deputy chair of the BMA council. However, Runswick is no ordinary chair. The Murdoch rag screeched that she’s also “unashamedly socialist” (God forbid) and the daughter of:

Clearly, the former Labour leader is still living rent-free in the right-wing media’s heads. However, this kind of propaganda – tying the BMA in with Corbyn – is perfect anti-strike content for the press. The Daily Mail ran a similar story to the Times on Saturday 7 January, again about Runswick and how the:

Far left hijacks doctors’ union: Investigation reveals how a unit of militant young medics have infiltrated the BMA in a bid to engineer 72-hour walkout by junior doctors

A union being left-wing and organising strikes? ‘What madness is this?’ Daily Mail readers must ask. Well, it’s an obvious case of manufacturing right-wing consent for anti-trade union sentiment. However, in the case of the Times it was also blatant manipulation – the Murdoch shitrag had already published the article on Runswick in December.

Odd thing about this story: it’s got an updated flag but if you look at the comments under it they’re all dated 3 weeks ago.

Have they just ‘refreshed’ an attack pice from last month? pic.twitter.com/CafIbNbOxk

A cursory search of the Wayback Machine shows that the Times did indeed first publish the piece on 17 December. Due to the Times being paywalled it’s not possible to see how it’s changed the article since then – not that that really matters. The point is that this obvious propaganda from the Times is par for the course from the right-wing media over strikes – especially NHS ones. Oh, and a bit of Corbyn as well, which reeks of desperation. C’mon, the Times. You can do better than this, surely?

Featured image via the Times – screengrab