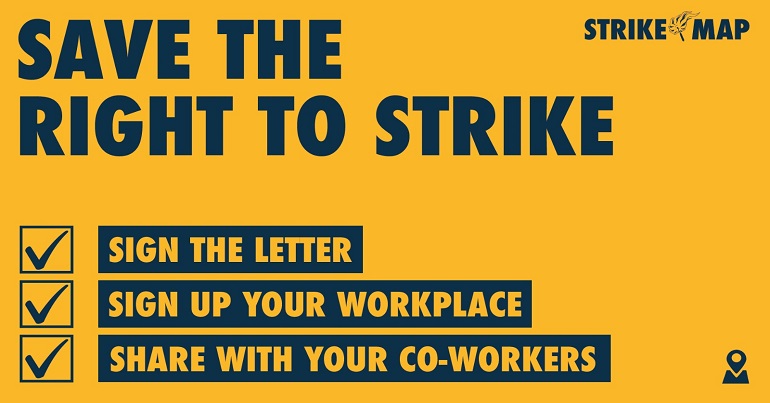 The Tories want to roll out even more authoritarian, anti-trade union laws. However, if they thought workers were going to take it lying down, they were wrong – as one group shows.

Unelected British prime minister and billionaire Rishi Sunak wants to take away your right to strike. At least, that’s what he seemed to be getting at when he floated the idea of a new anti-worker law this week.

The proposed legislation could see public sector workers who refuse to come in and provide a ‘minimum’ service during industrial action sacked. The laws may also allow employers to take legal action against trade unions.

This is a clear attack on a core democratic right – and the Daily Mail reported that the laws could be brought to parliament by the end of the month.

Business secretary and all-round clusterfuck Grant Shapps had a hand in the new laws, too. However, trade union leaders have already mocked Sunak and the Tory government, hitting back at their plans. National Union of Rail, Maritime and Transport Workers’ (RMT) general secretary Mick Lynch said Shapps was “incompetent” and that:

Now, thanks to the group Strike Map UK, workers are already opposing the Tories’ planned authoritarian laws – and you can get involved, too.

Strike Map UK has launched an open letter to Sunak. It’s being supported by the likes of the Fire Brigades Union, the Morning Star, and People’s Assembly. The groups want to encourage:

workers, union reps and branch officers to sign their workplace up to reject these changes and pledge to fight to protect our right to strike.

The letter is addressed directly to Sunak. You can read and then sign it here. Part of it states:

These authoritarian and restrictive laws will further tighten what the incoming Trades Union Congress (TUC) General Secretary, Paul Nowak, has described as the “most restrictive trade union laws in western Europe”. The right to strike is a fundamental democratic right. These proposals will remove this right.

Employers and Government have together offered pay cuts, as a crippling cost-of-living crisis – fuelled by inflation – continues to drive many into poverty and financial difficulty. What is needed now is action to support workers of Britain. Not threats and punitive laws.

Strike Map UK tweeted that as of Sunday 8 January, workplaces representing over 50,000 workers had signed up:

5️⃣0️⃣,0️⃣0️⃣0️⃣ workers have signed our collective letter supporting the right to strike 🪧

The Canary is backing Strike Map UK’s action, and we’ve signed our workplace up to it. As Glenton previously wrote for us:

These new proposals must be seen in their proper context. Under the Tories, a range of authoritarian bills have passed into law. And they have brought with them the sense of democratic space narrowing before our eyes.

With the Spy Cops Bill, the Policing Bill, the Overseas Operations Bill, and the Snooper’s Charter, it is evident that many of the basic rights which have been won over many years are being stripped back by successive Tory administrations.

Trade unions – already subject to severe restrictions from the Thatcher era – seem to be the next target.

Everyone must resist this and other regressive, authoritarian laws. As Strike Map UK says, the Tories will face “the determined opposition of workers” – and they won’t know what’s hit them.