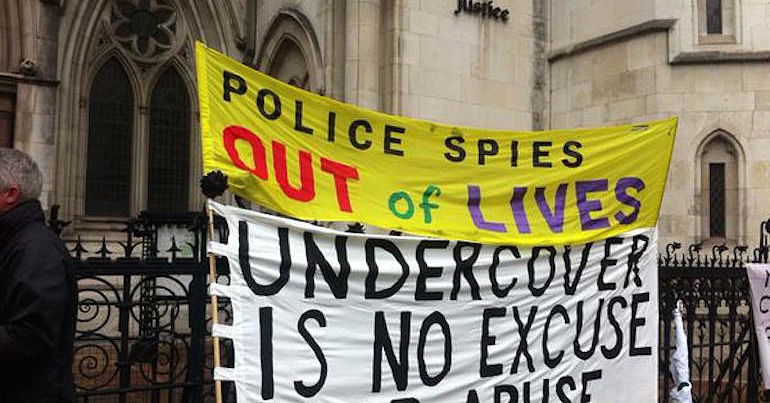 A confidential police document seen by The Canary reveals that instructions to ‘spycops’, or undercover police officers (UCOs), regarding adherence to the Human Rights Act are not worth the paper they’re printed on. Similar instructions form part of the Covert Human Intelligence (CHIS) bill, heavily denounced by former Labour leader Jeremy Corbyn.

The Tory government is progressing a bill to legalise the criminal activities of Covert Human Intelligence Sources (CHIS) who work with the police, MI5, and other state agencies. The bill passed its third reading on 15 October with Labour, under Keir Starmer, mostly abstaining.

Any authorisation for criminal conduct must be necessary and proportionate and compatible with obligations under the European Convention on Human Rights.

Confidential instructions issued to UCOs in 2009 specified that “Police officers must be fully conversant with Article 6 (the right to fair trial) and Article 8 (the right to respect for private and family life) of the European Convention of Human Rights”.

Below is an extract from confidential police files included in UCO Mark Kennedy’s Operation Aeroscope dossier, and signed by him: 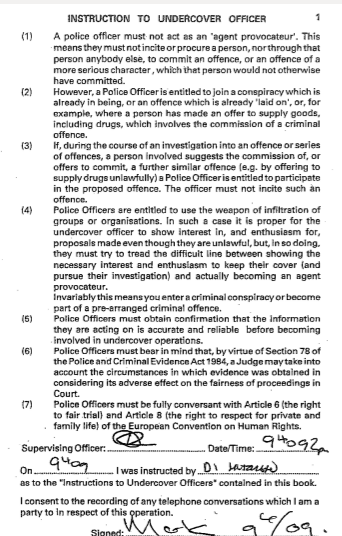 However, in the field, it’s another matter entirely. Kennedy routinely disobeyed these instructions to provide cover. He had long-term sexual relationships with a number of women, including with ‘Lisa Jones’ for over six years.

There were many other UCOs who disregarded these instructions in this manner too.

Indeed, more than thirty women have reported being exploited in this way.

It can therefore be argued that the instructions in the CHIS bill for operatives to adhere to human rights legislation are meaningless. For there is no guarantee that a CHIS agent will obey such instructions.

On the same day the bill passed its third reading, police finally conceded that six of their UCOs spied on environmental activist Kate Wilson. One of the UCOs was Kennedy. The Met and the NPCC (National Police Chiefs Council) admitted to breaching Article 8 rights and that “the intrusion was even greater”.

These admissions have wide reaching significance for the public at large.  Over 30 women now know that they were deceived into intimate, sexual relationships with undercover officers. Many more people were subjected to similar infiltration by undercover officers. What happened to me was by no means unique, and hundreds of people will have had their rights violated in this way. These admissions mean it is simply not sustainable to say these operations were legitimate, proportionate, or lawful

Regarding the bill, Howard Beckett writes in Labour List that the human rights stipulation is merely a device:

Security minister James Brokenshire is hiding behind the legal requirement for compliance with the Human Rights Act (1999), which incorporates the European Convention on Human Rights. But the government’s track record suggests this is being put forward in bad faith.

Beckett went on to explain:

Not only have many Tory backbenchers flirted with revoking the HRA altogether, the government’s legal defence team has previously argued that the state cannot be held responsible for the human rights compliance of individual agents once lawfully authorised, telling the [Investigatory Powers Tribunal], “the state, in tasking the CHIS… is not the instigator of that activity and cannot be treated as somehow responsible for it… It would be unreal to hold the state responsible.

Similarly, prior to the third reading of the bill, trade union leaders and 20 Labour MPs issued a statement regarding their concerns. Their list of objections includes:

The reliance on the Human Rights Act as limiting the scope of what might be legally authorised, despite the government’s own previous reliance on a legal defence that the State cannot be held responsible under the terms of the European Convention on Human Rights for actions undertaken by individual agents

Authorisation for a CHIS agent to participate in criminal conduct could be given:

In a damning speech in the Commons, former Labour leader Jeremy Corbyn queried the last example. He suggested the bill could target striking workers, who could also be subject to blacklisting.

If CHIS agents are used to prevent strike action and/or assist in blacklisting, this could potentially be a violation of human rights.

The protections in the CHIS bill, as with the instructions to UCOs, are arguably disingenuous, if not worthless. They equate to an attack on all workers and their livelihoods, and on political dissent itself.