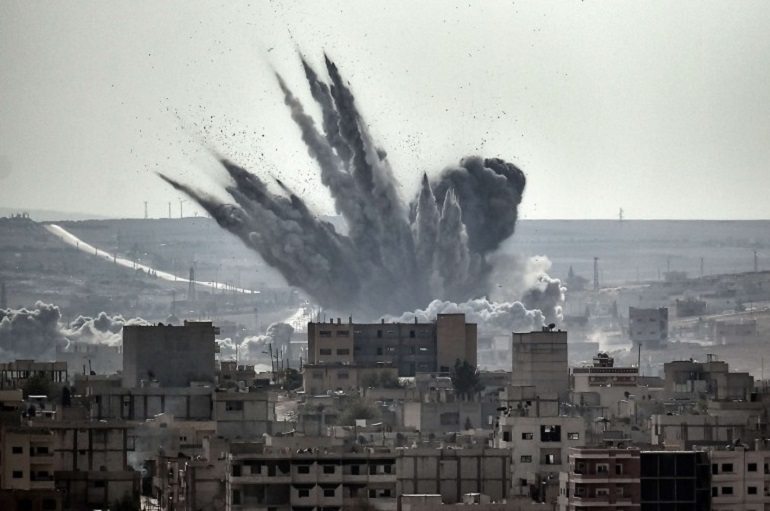 It’s becoming clearer and clearer that western involvement in the Syrian conflict began as a covert attempt to overthrow the Assad regime by arming his largely Islamist opponents.

But whatever its beginnings, the west’s focus turned definitively towards Daesh (Isis/Isil) from 2014 onwards, when the jihadi group made it very clear that western nations were just as much the enemy as Assad. And this altered focus would soon place western governments on a political collision course with one of their key NATO allies – Turkey.

The current Turkish regime has long been a time bomb waiting to explode, threatening collateral damage across the Middle East. But only recently has its ticking become too loud for the world to ignore. And what’s perhaps most worrying for western governments is that Ankara is now forming ever closer links with their arch-rivals in Russia.

It’s taken Ankara and Moscow a while to get to this point, though.

In November 2015, Turkey shot down a Russian jet in what would be a key moment for both the Syrian conflict and Turkey’s standing in the international community. Tensions soon escalated, and Russian President Vladimir Putin spoke of Turkey’s oil links to Daesh, referred to the country’s regime as “terrorists’ accomplices”, and placed strong sanctions on Turkish tourism and businesses. Turkish exports to Russia allegedly fell by 60.5% in the first half of 2016 (compared to the same period in 2015).

At the same time, Russia allegedly coordinated a number of airstrikes with the secular Kurdish-led ground forces of Rojava (northern Syria) – which was a big blow for Turkish-backed Islamist forces in Syria. It also opened up diplomatic relations with Rojava (a region upon which Turkey has long imposed a brutal blockade), calling for Rojavan representatives to attend Syria’s peace talks.

But with Turkey’s western allies increasingly distancing themselves from a regime in Ankara which was increasingly curtailing human rights, attacking media outlets, and massacring its own citizens, the stage was set for a change in tactics. (Even more so when we consider that the USA was also ramping up its temporary support for Rojavan militias in their efforts to defeat Daesh on the ground in Syria.)

In early July, Ankara hinted at its openness to make deals with the regimes in both Moscow and Damascus – which it had previously opposed – in an apparent attempt to stem Rojava’s influence in the region and show its opposition to the western-backed advances made on jihadi territory by Rojavan militias.

The Turkish regime was also seeking to clean up its image in general, almost a year after nose-diving into a destructive and self-indulgent civil war on its Kurdish communities, by replacing its prime minister in May. This didn’t only mean moving closer to Russia and Syria, but also to Israel and Egypt.

Then, on 15 July, a section of the Turkish army launched an abortive coup against its own government. The coup plotters claimed they wanted to “reinstall the constitutional order, democracy, human rights and freedoms” in Turkey.

While western leaders quickly condemned the coup attempt, a pro-government newspaper in Turkey soon accused the USA of orchestrating it. And these media-fuelled suspicions would further strengthen a growing current of anti-Americanism in Turkey, giving Ankara even more reason to distance itself from its allies in Washington.

Even though Putin has previously slammed Turkey’s links with jihadis in Syria, the economic benefits of a renewed Russian alliance with Ankara (there are currently two major joint energy projects on hold) have clearly played a part in pushing the two powers to resolve their differences. Plus, Putin’s political pragmatism is notorious, and he’s always ready to jump at any opportunity to step in where the west is unwilling to go.

On 9 August, Turkish President Recep Tayyip Erdoğan visited Russia, on his first foreign visit since July’s coup. The groundwork for restored relations had already been laid, with Erdoğan allegedly apologising to Russia back in June and Putin expressing support for Erdoğan’s regime after the coup. And duly, Erdoğan asserted in St Petersburg on 9 August that:

the Moscow-Ankara friendship axis will be restored.

Putin, meanwhile, insisted that he would phase out sanctions on Turkey “step by step”.

the symbolic nature of this visit within weeks of the botched coup is far from lost on those in the US and EU who are searching for signs of possible permanent policy change [in Turkey]… To the delight of President Putin, Mr Erdogan is presumably happy to keep the West wondering, and sweating, for now.

The impact for Syria

Turkey has been at the forefront of western-backed efforts to overthrow the Assad regime in Syria ever since 2011. And its hostility to the biggest secular forces in Syria – the Kurdish-led militias of Rojava – has contributed significantly to the fact that around 60% of anti-Assad fighters today are thought to have similar extremist views to Daesh.

Renewed relations with Russia may push Turkey further away from supporting jihadis and closer to supporting a political settlement in Syria. This would likely lead to some sort of truce between the Assad regime and Turkish-backed Islamists. But it would also mean the sidelining of the secular, multi-ethnic and gender-egalitarian forces of Rojava – which the Turkish regime opposes with a passion. And that would not be good news for democracy in Syria.

A budding friendship between Putin and Erdoğan and a further distancing between NATO allies, meanwhile, could lead to Turkey’s exit from the alliance. If this happened, western governments would lose the influence they have been desperately seeking in Syria since 2011 – mostly through their links with Turkey. Ankara, on the other hand, would increase its influence in the region. And judging by its treatment of its own citizens, and its longstanding links with jihadis in Syria, that would almost certainly lay a minefield of further problems.

But whatever happens in the coming months, the thawing of relations between Ankara and Moscow will almost certainly prove to be a turning point in the Syrian conflict – and possibly for the whole power dynamics of the Middle East.

– Read more Canary articles on Turkey, Syria, Rojava, and more international reporting from us at The Canary Global.