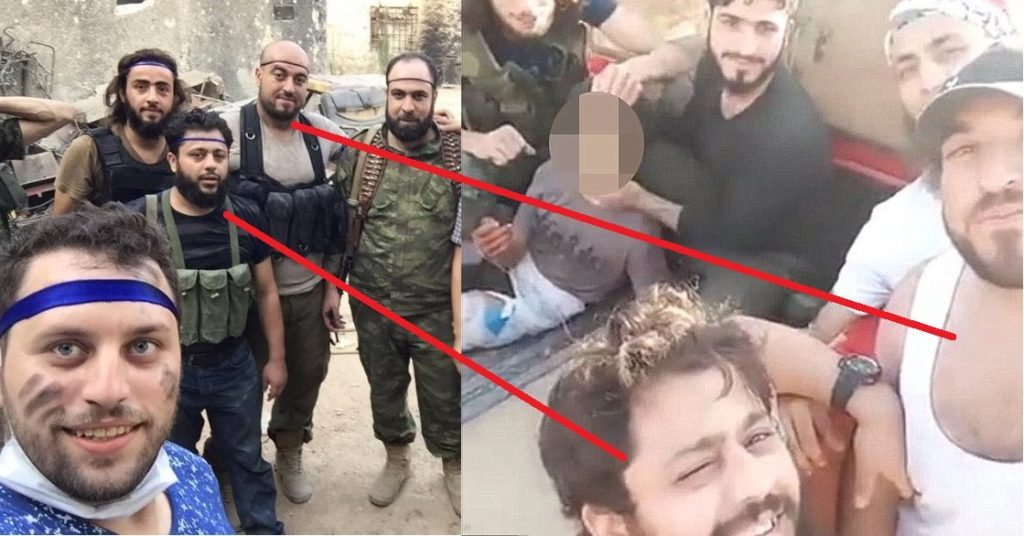 WARNING: This article may disturb some readers. The purpose of sharing it is to convey the complexities of the Syrian conflict.

The photojournalist behind the viral images of ‘the boy in the ambulance‘, which continue to make headlines around the world, has been identified by the Associated Press (AP) as Mahmoud Raslan (also spelled Rslan). His photo of a shell-shocked boy who barely survived an airstrike in Aleppo has captured the hearts and emotions of millions and conveyed a powerful momentary glimpse into the senseless and horrific devastation endured by Syria’s innocent children. But while some praise Raslan, he appears to have some horrific skeletons in his own closet.

Raslan’s social media history reveals a bizarre twist, which demonstrates the ironies and complexities of the Syrian conflict. The photographer has posted photos of himself posing with known child-killers from another recent viral moment: the infamous filmed beheading of a 12-year-old Palestinian boy captured in Aleppo by the ‘Zenki’ militant group.

The Palestinian boy, filmed surrounded by his Zenki executioners in the back of a pick-up truck just prior to his beheading, had been reportedly removed from a hospital and had intravenous lines (IV) attached to him.

On 5 August, about two weeks after the public beheading committed by unmasked men whose identities were made clear by the camera, Mahmoud Raslan uploaded a selfie with two men who had apparently been among those carrying out the shocking execution on his Facebook page: 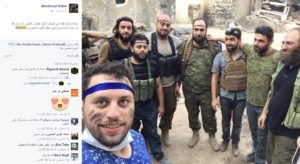 Raslan is grinning in the bottom left corner and behind him stand two men who appear to have been featured prominently in the prior child-beheading video [screenshot]: 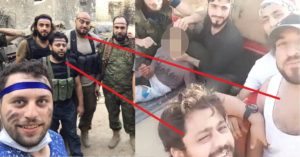 At least one of the two child-beheading men has an identify that’s been clearly established. The man directly behind Raslan in the selfie on the left is Umar Salkho. He is often described in Arabic media as a leader of the Zenki Movement, the group responsible for carrying out the atrocity – the video footage of which was uploaded to the internet on 19 July 2016. Ironically, the US-backed Zenki group claimed it had quickly arrested the individual perpetrators and said they would face swift justice. But Salkho can be seen again in a video uploaded on 28 July 2016 here.

Raslan wrote the following caption for his 5 August Facebook selfie in Arabic as follows [translated by The Canary]:

When you see the leaders on the front, know that victory is coming, with God’s permission. From besieged Aleppo, wherein they all have their faces blackened

It is deeply disturbing that the photographer now being lauded globally for the ‘the boy in the ambulance’ photo only a short time ago posed with and praised men who were well-known for having publicly beheaded a wounded child. Incidentally, Raslan is also wearing the same shirt on both occasions (see him go in and out of the footage which captured the moments the little boy was placed in the ambulance).

Raslan, who identifies himself on Twitter as “a Syrian media activist” [translation], has also made multiple statements publicly praising suicide bombers.

The below screenshot from Raslan’s Facebook page reads as follows [translated by The Canary]:

With the suicide fighters, from the land of battles and butchery, from Aleppo of the martyrs, we bring you tidings of impending joy, with God’s permission 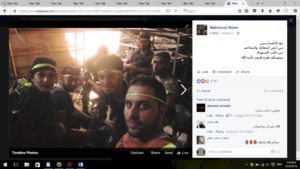 Thousands of suicide fighters and tens of booby-traps are being prepared for the great battle in Aleppo, the first battle where I see men weeping because they can’t participate on account of the number of attackers. 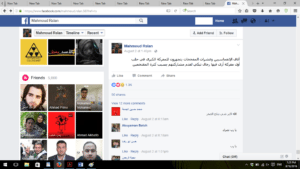 Many more videos and images exist on Raslan’s social media accounts which praise inghimasiyin (an Arabic transliteration which in the Syrian war is a reference to “suicide-fighters“).

It is a sad testament to the complexities and ironies of the seemingly endless war in Syria that even some of its most celebrated photographers would associate with child-killers while at the same time attempting to illuminate the tragic plight of children in the country.

Syria has produced the ugliest of all propaganda wars, in which all sides now compete to place before the world the most iconic and moving images of suffering. This fact should make us wary and cautiously critical, not of the innocent children featured in such images, but of the motives of those who glorify brutality one day while snapping pictures of its victims the next.

– In the UK, join your local Stop the War Coalition to protest escalation in Syria.

– See other international articles from The Canary and more on Syria here.