The Syrian war just took another shocking turn, and it could plunge the region even further into chaos [VIDEO] - Canary 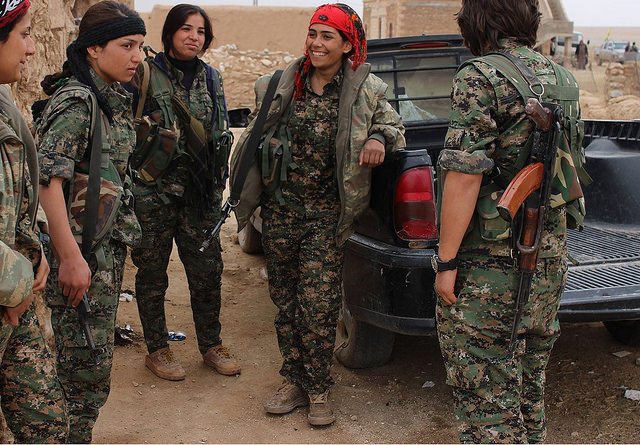 Turkey has just reached an agreement with Iran and Russia over the fate of Syria. And this has coincided with a relentless Syrian bombardment of one of the most effective ground forces in the fight against Daesh (Isis/Isil).

Since 16 August, the Syrian air force has been attacking the largely-Kurdish militias of the YPG and YPJ in the northern Syrian city of Hasakah (Hesîçe in Kurdish). These hostilities began just days after YPG/J-led forces defeated Daesh in one of its strongholds close to the Turkish border, cementing once again the idea that the YPG/J are the most effective anti-Daesh ground force in Syria.

An ‘understanding’ between regional powers

The Turkish government has apparently reached an ‘understanding’ with Iran and Russia aimed at guaranteeing Syrian ‘sovereignty’. But the only political stance which really seems to unite Turkey, Iran, and Syria is their opposition to Kurdish rights, as numerous commentators have pointed out.

Turkey has actively opposed the YPG/J – and the democratic, multi-ethnic and gender-egalitarian model they defend in the region of Rojava (northern Syria) – since 2012, imposing a blockade on the territory under their control while leaving Daesh-controlled border posts open. Now, it has reiterated yet again its commitment to “not allowing Syria to be divided on any ethnic base” (read: ‘no self-government for the majority-Kurdish communities of Rojava’).

Only a handful of Middle East based outlets, such as Al Jazeera and Rudaw, have commented on this highly significant development.

Groundwork for the Russian end of the deal probably began during a meeting between Turkey’s President Erdoğan and Russia’s President Putin in St. Petersburg earlier in August.

As part of the deal, Turkey would end its support for anti-Assad militias, such as Jabhat Fateh al-Sham (the former al-Qaida affiliate once called Jabhat al-Nusra). It would also see the US sidelined from geo-strategic negotiations, Turkey move closer to Russia, and could even end with Turkey losing its membership of NATO.

Curtis Scaparrotti, NATO’s Supreme Allied Commander Europe and head of US European Command, has just arrived in Turkey to find out exactly what’s going on.

As Syrian SU-24 war planes attacked the YPG/J in Hasakah, US special forces were apparently close by (having advised Kurdish-led assaults on Daesh in recent months). Once the bombs began to drop, the US diplomatically urged Syrian forces to back off, sent in jets to back this warning up, and eventually pulled its forces out of harm’s way.

This is the first time that Syrian forces have attacked the YPG/J from the air. As a result of the attacks, Rojavan authorities have evacuated thousands of civilians from Hasakah in recent days.

The YPG issued the following statement in response to the attacks:

At a time [when] the People’s Defence Units (YPG) and the Democratic Syria Forces (SDF) have achieved yet another success in the fight against Daesh (ISIS) terrorists, [the Syrian regime’s use of] warplanes and heavy weaponry to target residential neighborhoods [in Hasakah] interprets into an attempt to undermine the positive results of the Manbij offensive, and support for Daesh. This, too, means the regime sees Daesh’s losses as its own – to accomplish its sordid plans, the regime hopes for Daesh to remain. By implementing such actions, the regime is committing suicide.

A second statement was subsequently issued by YPG General Command.

The anti-Rojavan air offensive, coupled with the agreement reached recently by key regional powers, looks suspiciously like an attempt to crush any ambitions of regional autonomy and democratic self-government in Syria. And the message is clear – the central government in Damascus will continue to rule Syria with an iron fist, whether Assad is in power or not.

The US, meanwhile, has been suspiciously silent. This is all the more significant given that it has worked closely with the YPG/J in recent months in the fight against Daesh.

There has always been speculation that the US was just supporting the YPG/J temporarily in its fight against Daesh, and that once a certain point had been reached in the war it would simply abandon them to their fate.

As the YPG/J now launch a counter-offensive in response to the attacks from the Syrian regime, will the US maintain its silence? Or will it try to exploit the situation for its own ends?

–  Donate to the Rojava Plan (to support the system of self-government in place in northern Syria).