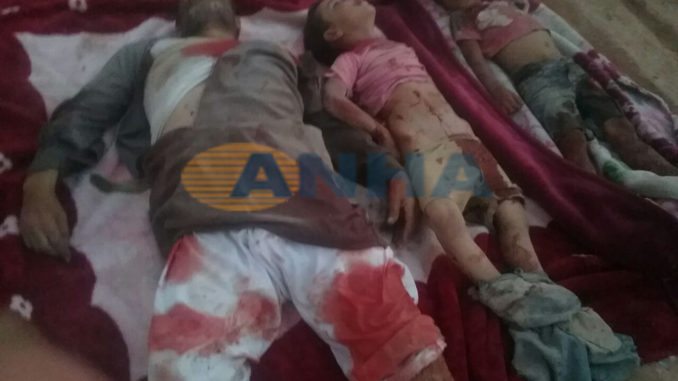 WARNING: This video contains disturbing scenes which may not be suitable for everyone and are not recommended for the faint-hearted. The purpose of sharing it is not to shock our readers or encourage violence, but simply to convey the fate of innocent civilians caught up in the Syrian conflict.

Reports have just emerged of unarmed civilians (including children) being killed in Dandania, Syria, by the Turkish military. This comes just a week after Turkey invaded Syria (with US air support) in order to push back one of the most effective forces currently fighting against Daesh (Isis/Isil) on the ground.

Locals in Dandania, a town near the recently liberated city of Manbij, also claim that the Turkish army carried out chemical weapon attacks there on 25 August. Smoke and foul smells apparently rose from the rockets fired into the village, causing burns and itching on their skin.

The following graphic video footage shows the aftermath of the alleged massacre.

One report states that Turkey – a key NATO member – has advanced further southwards since it initially crossed the Syrian border on 24 August, and that its forces are in pursuit of the Syrian Democratic Forces (SDF).

The main Turkish objective is apparently to take Manbij, the multi-ethnic city which the SDF officially liberated from Daesh after a 73-day battle on 12 August. The aim of the SDF’s Manbij Offensive was to cut off one of Daesh’s only remaining links to Turkey, and thus its supply of new weapons and fighters.

After the liberation of Manbij, the SDF implemented the same political model put in place in other northern Syrian communities under their protection. This is a multi-ethnic model that – while ignored by many Western media outlets for a number of years – has recently been praised for its commitment to democracy and equality. The idea is that people on the ground make the policies that affect them through participative councils, which insist on reflecting local diversity.

The problem for Turkey is that the Manbij Civilian Council, which took over after Manbij’s liberation from Daesh, is an SDF ally and is therefore opposed to the Turkish invasion. In early August, SDF official Nasir Haji Mansour made the aim of the council very clear, saying:

We want everyone to participate in administrating the city, whether they are against us or not… We need to accept pluralism.

Turkey apparently has a problem with that, however – a fact that is unsurprising given how the current regime has responded to democratic demands from its own citizens in the last year.

But Turkey has since denied that a ceasefire has been agreed. It has avoided talking about the SDF as a whole, however, instead insisting only on its opposition to the Democratic Union Party (PYD) – the biggest political organisation behind the SDF project.

The denial of a ceasefire seems to put Turkey at odds with the US (or at least with official US statements), though Pentagon Press Secretary Peter Cook insisted on 1 September that further clashes between Turkey and the SDF were being avoided.

In spite of the current tensions sparked by the recent Turkish invasion, the SDF has continued to focus on its fight against Daesh, attacking its forces in north-western Syria and liberating three villages. US air strikes have supported these operations by attacking Daesh in the nearby town of Marea.