These women are leading a feminist revolution, and that really scares Turkey - The Canary 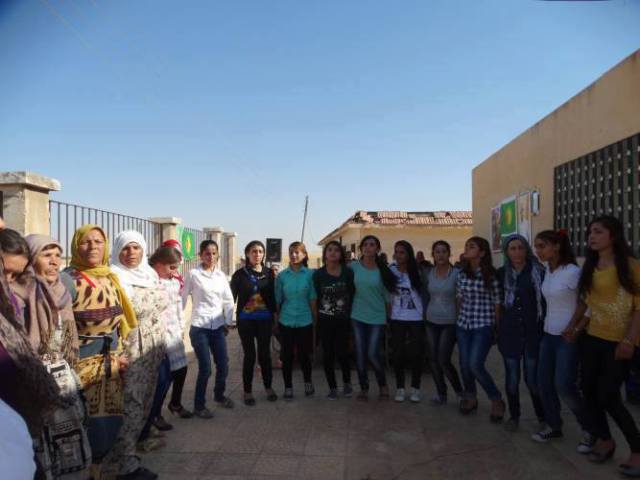 The current Turkish regime has been regularly accused of sponsoring Daesh (Isis/Isil) and other jihadi groups in Syria. One of the main reasons for this behaviour has been Turkey’s opposition to a feminist social revolution taking place on the Syrian-Turkish border – one which it has sought to undermine by any means necessary.

But despite Ankara’s best efforts, this revolution is not going away, as a new report reveals.

Rojava is a multi-ethnic region in northern Syria with a largely Kurdish population. As the military escalation of 2011 in Syria turned the country into a warzone, communities in Rojava prepared to defend and govern themselves. It sought to create a secular form of direct democracy focused on equality and peaceful coexistence. From 2012 onwards, it became one of the most peaceful parts of Syria, even though it faced constant attacks from jihadi invaders.

For most of 2016, Rojavan militias were among the strongest opponents of Daesh, and threw the group out of its stronghold in Manbij in August. But Turkey decided to invade northern Syria soon afterwards, aiming mainly to weaken these militias and stop them from continuing their advance on jihadi-held territory. Rojavan forces now have to defend themselves in the north from Turkey and al-Qaeda-influenced Turkmen jihadis backed by Turkey, and from Daesh elsewhere.

A report on the Rojava Revolution

But while their defence resources are more stretched than ever before, the people of Rojava are both continuing and expanding their social revolution.

The Committee of Diplomacy of Kongreya Star – a confederation of women’s organisations in Rojava – recently released a 33-page report, in which it explained how the Rojava Revolution is developing.

The report provides a detailed update on how the women of Rojava are playing a leading role in organising all areas of life: education, culture and arts, economics, self-defence, social affairs, problem-solving and justice, politics, local government, ecology, press and media, and international relations. It says that this process stems:

from the conviction that women need to organise themselves autonomously, as only a strong association of women can form the self-defence system necessary to confront the existing male-dominated institutions. Only when women are able to organise themselves, we believe, will they be able to challenge the current patriarchal structures and mentalities in order to build viable, sustainable alternatives. Without the liberation of women, a truly free society is impossible.

But while the Rojava Revolution seeks to create a more equal society, it also needs to defend its people. The report adds that:

self-defence [is] a fundamental principle of defending, developing and improving the values of this ethical and democratic society. Self-defence therefore includes all spheres of life, not only the military aspects.

It goes on to explain how its communities are organising themselves and how a communal economic system is being established.

But a point that is particularly worrying for both the Turkish regime and many other states in the Middle East is that the people involved in the Rojava Revolution hope not just for a better society in their own communities, but for a better society across the whole region. And gender equality is at the heart of this mission, as the report insists:

Working throughout Rojava and Syria, Kongreya Star aims to be an example for the entire Middle East and to realise the women’s liberation revolution across the entire region. Struggling against patriarchy and the accompanying family structure, we aim for the free-union of woman and man and a democratic family structure based on mutual will. Building from there, our goal is to overcome all forms of domination, power, ownership and sexism to establish a truly free society.

– Kongreya Star is keen to receive support – humanitarian and financial – to help consolidate the Rojava Revolution. To find out more on how to help, contact the Committee for Diplomatic Relations of Kongreya Star at [email protected].

– Ask Theresa May and your MP to officially recognise Rojava.