Nicola Sturgeon just nailed why the UK voted Brexit, and the Tories will be furious [VIDEO] - Canary 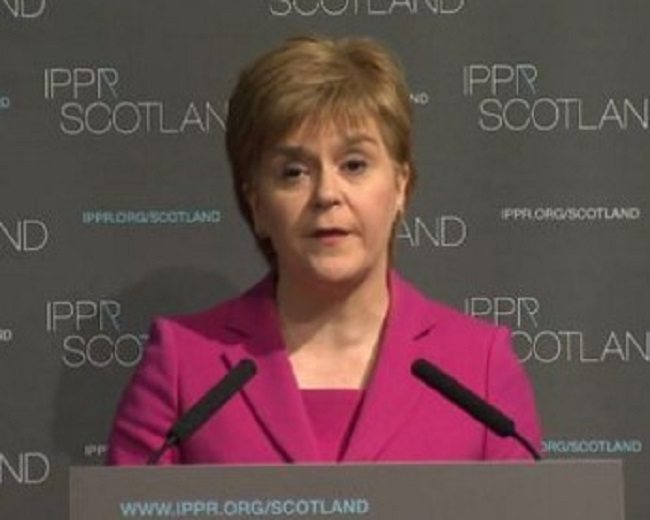 On Tuesday 27 September, Nicola Sturgeon was in London to give a speech on the UK’s vote to Brexit the EU. Scotland’s First Minister said that the vote was, in part, “born of inequality” in communities UK-wide. And she took direct aim at the Tories, slamming “austerity budgets” and UK-wide inequality.

In a speech to the Institute of Directors at its annual conference, Sturgeon said that:

There are many, many causes of the vote to leave the EU. For many people, they will have included entirely reasonable doubts and reservations about the EU. It is, after all, an imperfect organisation.

She said that while Scotland mostly voted to stay in the EU:

I can’t ignore the fact that even in Scotland, a million people voted to leave. They did not think that the European Union benefited them. They did not see advantages from free trade and free movement.

But she said the vote to Brexit, which analysis has since shown was led by the poorest areas of society, was about more than this:

Brexit was a product of a sense of disenfranchisement and disillusionment. It was borne of inequality, of feelings of powerlessness – of austerity budgets which hurt the public services and social safety nets that so many people depend on.

As The Canary previously reported, the Joseph Rowntree Foundation (JRF) found that Brexit was an apparent protest against the UK establishment, by the poorest in society. Its research showed that:

Sturgeon echoed these findings in her speech. And her comments that the vote was “born of inequality” from communities UK-wide also ties in with the evidence.

The “haves” and “have-nots”

Middlesbrough voted to leave the EU by 65.5%, making it one of the most pro-Brexit towns in the UK. It was ranked in 2015 as the most deprived town in England, based on the number of impoverished areas within it. Over half of its neighbourhoods were deprived, an increase since 2010. It was pegged amongst the top ten since 2004.

Middlesbrough ranked third in the Employment Deprivation Index, based on the number of benefit claimants. A quarter of the population is considered to be living in income deprivation; in other words, within families who are staggeringly poor.

The child poverty rate is 37% in the town and the ward of Thorntree has the highest rate at a shocking 61%. This equates to 1,288 children. Overall, these figures mean that more than 9,000 children live in poverty in Middlesbrough.

Other key statistics show that:

Sturgeon said that the Conservative government must do more to address the issue of inequality in the UK:

One consequence of the referendum must be a new effort – which needs to be given real substance in the UK government’s Autumn Statement – to ensure that the benefits of growth, of globalisation, are more fairly distributed.

And she slammed the government’s continued drive for austerity:

The UK Government has suffered one of its most significant policy reversals in generations. It can no longer ignore the social and economic cost of inequality and the impact of its misguided commitment to austerity.

But with more cuts still to come, and warnings over the financial fallout from a Brexit hitting working families, Sturgeon’s calls to the Tories may fall on deaf ears. And if their track record is anything to go by, all opposition parties in Westminster will need to unite to ensure that Brexit works for everyone in society. Not just the rich and the Tory’s “chums”.

– Read other articles by The Canary on Brexit.