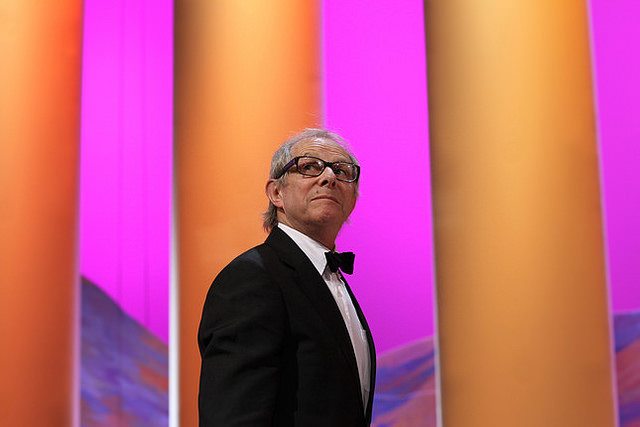 Ken Loach, the award-winning film director, summed up in one speech why the MPs plotting against Jeremy Corbyn dislike him so much. Speaking at Momentum’s “The World Transformed” conference on 26 September, Loach said, in short, of Corbyn: “He’s one of us”.

The veteran director, whose latest film I, Daniel Blake deals with the current state of Austerity Britain, was speaking at the fringe event in Liverpool. In a wide-ranging address, he asked:

The “hostility” of what Loach calls “capital” has already been evident. When Richard Branson attacked Corbyn over ‘TrainGate‘, it was an example of private wealth objecting to the possibility of something it makes money off being nationalised. Loach went on to speak about what he perceived Corbyn’s Labour would do:

Loach continued with a warning about just what Corbyn and his supporters will be up against now:

So going through the obstacles he’s going to face, we’ve obviously got the media and the BBC and the press, they’re all hostile, and the attacks will continue, because they’re not doing it as a test, they’re doing it because he’s a threat to him.

To make his point, he cited an article by Guardian columnist Barbara Ellen:

Just to give one sample, and [I hope] you’ve been taking the medication. Here’s a quote from that left paper The Guardian, from one of their columnists. She’s talking about the Corbyn supporters: they’re peddling everything from pungent whiffs of antisemitism, sexism, and other forms of bullying and discrimination to meaningless hipster drivel, delivered with sub-zero acumen. Now that’s from a paper on our side, so God knows what The Mail and The Express are saying.

Is unity even possible?

Loach said it would not just be the press that would continue to be hostile to the Labour leader, but the “moderates” of his own party:

Of course, the Labour right wing will continue [to be hostile]. Kinnock has already been at it. And of course, we need lessons from Lord ‘Lord’ Kinnock on how to win elections. He lost every one. And this is when I get worried about the calls for unity, because these guys ain’t going to unite.

He then asked whether “unity was on the cards?”:

I raise this because if the Labour Party under Corbyn is going to win, can we win with these people pulling at Jeremy’s coat tails, pulling him back, undercutting the message, not speaking clearly.

Another purge is possible

Loach went on to say that, in his opinion, it’s questionable whether the people behind the ‘purge‘ of Labour members should stay in charge of the party. But, in one of the more sensational moments of his speech, he called for the people who sat in the cabinet during the Iraq war to have their membership revoked:

And there is a purge I’d recommend to you, actually. It’s up to you… I think that would send a message that this Labour Party had changed for real, and they’re not going to put up with those lies, and criminals and murderers again.

Whether this particular recommendation would ever be acted upon remains to be seen. But Loach, in summing up, made perfectly clear the challenges that lay ahead:

If and when Jeremy Corbyn and the Labour Party get into power on that programme, there will be worldwide opposition that’ll make the opposition we’ve been talking about child’s play. We have to consider the extent of the opposition we face, if we’re serious. And if we’re not serious, the tide will just swamp right across this little sandcastle we’ve built and it will blend into the sand. So it’s a big, big journey we’re undertaking.

People argue that Loach is not able to represent the Labour Party, due to his support for other organisations. But what no one can surely argue with is his passion, empathy and understanding of the struggles that ordinary people in the UK face. And it’s this ability to relate to everyone, no matter who they are, which is seen in Corbyn also. As Loach said: “Jeremy Corbyn is one of us. Absolutely”. And the same can be said for the veteran film director as well.

– Read other articles by The Canary on the Labour Party conference