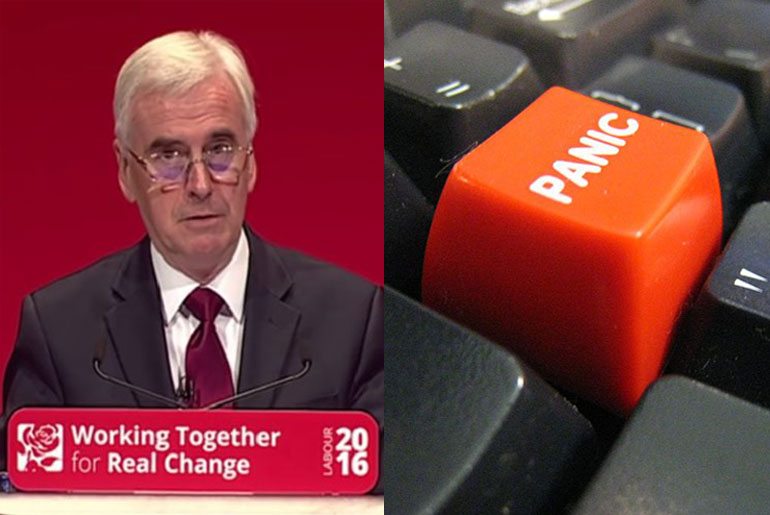 The Labour Party conference in Liverpool is drawing to a close. Having received an overwhelming mandate from the party, Jeremy Corbyn and his shadow cabinet have used the platform to lay out a raft of policy proposals for Labour’s future. And the mainstream media has gone into total meltdown.

The 27 September front page of The Daily Mail, the newspaper with the biggest reach in the UK, is headlined “Labour in La-La land”. The article claims Labour has plunged into further “toxic infighting” while suggesting the Corbyn/McDonnell vision is “a blueprint for national bankruptcy and mass unemployment straight from a Marxist textbook”. 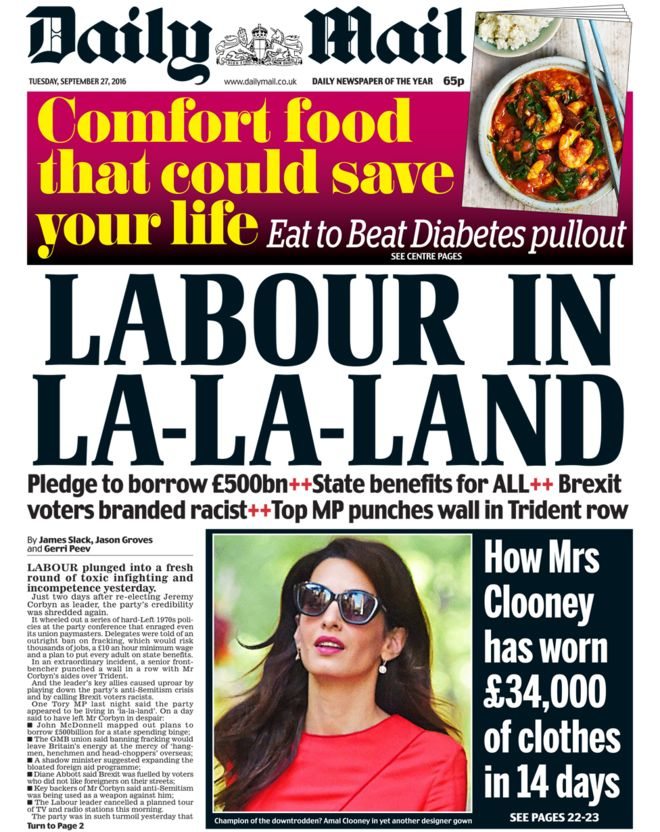 The Daily Star continued the theme, talking of the Labour leadership making “bombshell pledges”, about “fantasy economics” that would take Britain back “to the industrial strategy of the 1970s”. Meanwhile, The Telegraph, the country’s best-selling broadsheet, ran a piece with the headline “Labour’s mad economic plans would ruin Britain”. The article claims that Shadow Chancellor John McDonnell’s proposals are “ruinous, backward-looking and economically illiterate”.

Media criticism of Corbyn’s Labour is nothing new and has been a noted feature of his year in the job. Before the conference ends though, it is worth being clear about the policies that have caused such angst on Fleet Street.

1. Alongside his grandstanding finale in which he dared to use the word ‘socialism’, McDonnell pledged to raise the minimum wage to livable levels, with the benchmark of £10 an hour proposed. The current rate of £.7.20 per hour has been the focus of much criticism, particularly with the proliferation of zero hours contracts at the lower end of the job sector.

2. McDonnell also vowed to curb the excesses and tax-dodging of the super-rich, saying that under Labour, “there would be no more Philip Greens”.

3. Away from the economy, Shadow Energy and Climate Change Secretary Barry Gardiner outlined Labour’s commitment to clean energy. As well introducing general safeguards for the environment, fracking (the destructive extraction of shale gas by fracturing surface rock), would be banned.

4. Labour’s commitment to supporting the most vulnerable members of society was emphasised by shadow work and pensions secretary, Debbie Abrahams. She vowed to scrap the controversial ‘fit to work’ tests which have seen so many disabled claimants losing their rights to benefits.

5. The ever increasing costs of childcare were addressed by Shadow Education Secretary Angela Rayner, who proposed an ‘early years taskforce’. Its mission would be to guarantee affordable childcare provision for all.

6. Meanwhile, Diane Abbot, Shadow Health Secretary, vowed to remove contracts from private healthcare providers who are failing to provide value to the NHS and driving it towards complete privatisation.

It is clear that in re-electing Jeremy Corbyn, the Labour party has opted to forge a new direction. In this way it will offer a genuine alternative to the Conservative years of austerity, tax-breaks for the rich and attacks on the poor, attempting to deliver a more equal society. Vested interests do not like this and our corporate media, who are employed by and represent those vested interests, do not like it either.

It is now a battle of the establishment against the rest.

You can watch McDonnell’s conference speech below:

– Support The Canary here, so we can continue bringing you the news that matters.