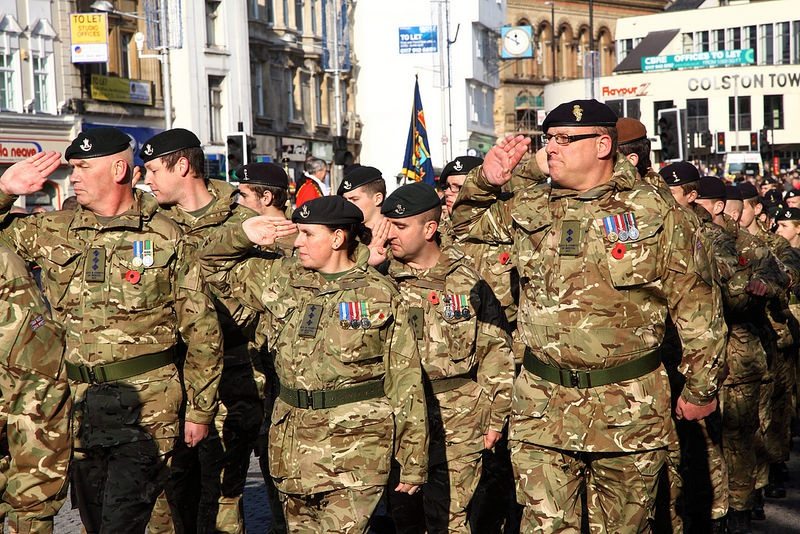 The Sun‘s latest attempt to smear Jeremy Corbyn, and his supporters, has spectacularly backfired after it resulted in the tabloid condemning war veterans instead. In its attempt to convince the British public it always ‘defends our troops’, The Sun has only succeeded in showing it is no true champion of the armed forces.

It explained that a “hard left rally” had taken place alongside the Labour Party Conference the previous evening that was “selling paraphernalia mocking crippled British troops”. That was the same day, The Sun roared, that “the hapless Leftie”, aka Corbyn himself, had spoken at the aforementioned rally, run by Momentum.

The “paraphernalia” detailed included a comic book entitled “Join the Army – free prosthetic limbs!” and a leaflet with a picture of a disabled action man on it which read “Paralysed Action Man”.

According to The Sun, the stall was run by comic book writer Darren Cullen and was facing pressure to shut down. The tabloid quoted Labour MP Dan Jarvis calling the merchandise “disrespectful”. He is quoted as saying:

It is utterly unacceptable that those who have been injured in the service of our country should be pilloried in this way.

This kind of behaviour has no place inside a civilised political party – it should be withdrawn immediately.

The sick toys, brought to you by veterans

But, as the group Veterans for Peace UK (VFP UK) quickly pointed out, the stall has “nothing to do with Labour or Momentum”. It displays a project called “Army, Be The Meat”, which was created in conjunction with the “Action Man: Battlefield Casualties” films, and was launched 18 months ago.

It is a project that is endorsed by VFP UK and numerous veterans of war. A fact that VFP UK stated would be very easy to discover:

That this project was backed by hundreds of veterans was as difficult to discover as typing words into a search engine and pressing enter.

In The Sun‘s determination to brand Corbyn supporters as extreme, it has, in fact, pilloried the very people it claims to support.

As VFP UK explained, the project was created as a counterpoint “to years of dishonest army recruitment material”. It aims to “educate people about the brutal reality of modern warfare and the possible negative outcomes of military service”.

That the core purpose of the project was ignored by The Sun‘s “appalling journalism” is not surprising. As VFP UK illustrates, the tabloid has form when it comes to framing stories to suit its own agenda, or in its “jingoistic ardour for clicks”:

This is the same newspaper group whose senior editorial staff acquired the personal details of dead soldiers, apparently by paying MoD officials.

The same Sun newspaper which cheered on the misconceived, illegitimate and ultimately failed wars which saw thousands of UK troops killed, mutilated and mentally injured.

The Sun used its ‘scoop’ as a lead-in to further condemn Corbyn’s defence position, noting he was facing “anger” for comments made about a current investigation into British military conduct in Iraq and Afghanistan. The tabloid also highlighted Corbyn’s recent ‘attack’ on plans to expand M16 operations.

The message was clear, and explicitly laid out by Conservative Party Chairman Patrick McLoughlin in the article, who said that the Labour Party are “no friends of our troops”.

Regardless of the value the project has, The Sun could only see it as a useful prop in service of its own anti-Labour agenda.

In reality, “Army, be the meat” and “Action Man: Battlefield Casualties” were conceived to highlight the realities of military service, and put pressure on the UK government to raise the army recruitment age to 18. As Ben Griffin, who served with the SAS in Iraq, and is the coordinator of VFP UK, told The Canary:

Our project is backed by hundreds of veterans, many of whom bear the wounds of active service in wars from D-Day to Libya. It is intended to educate young people about the brutal reality of modern warfare and the possible negative outcomes of military service.

The Sun newspaper claim to be the champions of soldiers and veterans, but actually they are merely the voice of the establishment and the war hungry.

In The Sun‘s ardor to paint Corbyn, and all around him, as a stain on our nation, it has done a great injustice to those that served it.

And if anything should be ‘shut down’, it’s not the stall that’s exhibiting merchandise to avert war. It’s The Sun, which does its level best to glorify and support the conflicts that our country should be rallying against.

– Find out more about the work VPN UK does.