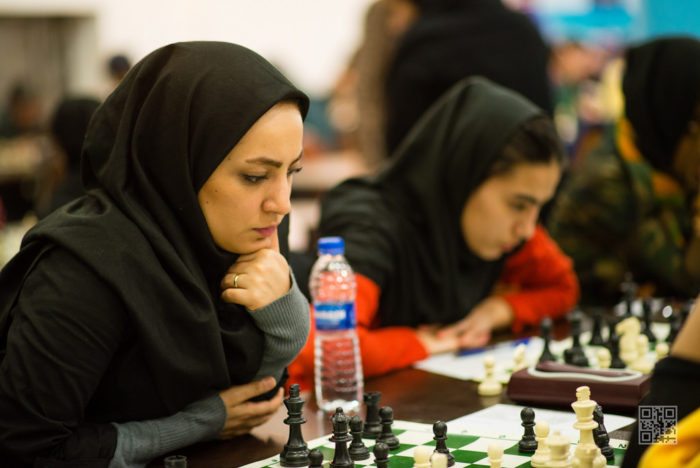 International chess players have called for a boycott of next year’s Women’s World Chess Championship, after Iran was announced as the host country at the end of September. The reason? Opposition to a law hated by women around the world.

US chess player Nazi Paikidze described on Instagram why she wouldn’t be attending, saying she would feel deeply uncomfortable about being forced to wear a headscarf (hijab) in Iran, in accordance with the country’s clothing policy. She also expressed her support for My Stealthy Freedom – an online social movement which campaigns for the right of Iranian women to choose whether they want to wear a hijab or not.

Recently, campaigners in Iran have been trying to garner support and mobilise action against this law. Activist Atena Daemi wrote on Facebook:

I have never experienced the freedom of not wearing a veil without the fear of the morality police.

Daemi is currently on home leave from a seven-year prison sentence which came after she challenged the law. The ‘morality police’ that Daemi refers to are police officers who patrol the streets of Tehran checking for violations of dress codes. Women who are deemed to be ‘inadequately covered’ can be publicly admonished, fined or arrested.

Founder of My Stealthy Freedom, Masih Alinejad, has argued that non-Muslims should also take action against compulsory dress codes for women, which serve to maintain gender inequality. On the issue of non-Muslim women visiting Iran, who are required to wear the hijab, she said:

When compulsory hijab affects all women, then all women should raise their voice.

Alinejad’s call to women (both Western tourists and Iranians) to remove their hijab in protest echoes the actions of Air France cabin crew members who refused to wear headscarves when landing in Tehran. And this protest led to actual change, with the airline allowing cabin crew to refuse flights to Iran.

But not everyone is in favour of the chess boycott.

One of Iran’s most renowned chess players, Mitra Hejazipour, told The Guardian that the boycott would be harmful, because it would undermine hard-fought efforts to promote female sport in Iran.

And undoubtedly, the hosting of the Women’s World Chess Championship in Iran would be a historic event. After the 1979 Islamic Revolution, chess was banned and declared haram (forbidden) because of its associations with gambling. But in 1988, Iran’s supreme leader Ayatollah Khomeini lifted the ban.

In light of this recent history, it is argued that a women’s chess championship would be a significant step forward for what women can achieve on the world stage.

History was already made during the 2016 Rio Olympics when Kimia Alizadeh Zenoorin became the first Iranian woman to win an Olympic medal. And female chess players in Iran may feel that the boycott is a hindrance to many more empowering moments like this. One woman in Iran suggested a way around this to the BBC:

The chess players should come to Iran and then refuse to play wearing their headscarves… This would get much bigger media coverage.

Consistency and the power of cultural boycotts

Many people reacted with indignation when French police forced a Muslim woman in Nice to remove her ‘burkini‘ in August. And many critics of the ban have compared it to repression in Iran, arguing that telling women what they can or cannot wear is a human rights violation, whatever country it takes place in.

But opinion is divided over whether cultural boycotts work. Some argue that they’re ineffective. Others claim they’re justified. History has shown us, however, that some boycotts – like the Rosa Parks bus boycott – can be critical in catalysing social change.

Many activists might draw parallels between the restrictions placed on Iranian women today and those placed on black Americans during the 1950s. Indeed, women in Iran suffer discrimination in many areas of life. However, the famous bus boycott didn’t jeopardise the opportunity of black Americans to excel in the way a chess boycott could for women in Iran.

An issue of personal conscience

While chess players refusing to compete in next year’s tournament may not create a massive shift in the debate on women’s rights in Iran, Nazi Paikidze feels that being forced to wear the hijab would simply be inconsistent with her principles. And this echoes the feelings of female tourists who have sent emails to My Stealthy Freedom about how uncomfortable they were about being forced to wear the hijab.

Ultimately, while the proposed boycott has its critics, some sort of boycott – as an expression of solidarity with female Iranian activists struggling against government overreach – is likely to go ahead. Unless, of course, Iran decides to relax its clothing laws.

– See more from My Stealthy Freedom.