This peace activist just slammed the Nobel Peace Prize, and even Obama thinks she's worth listening to - The Canary 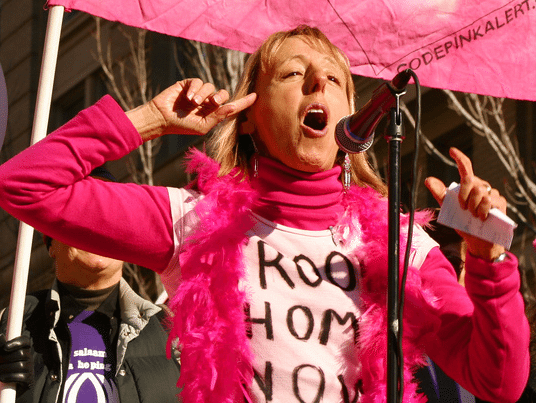 Around the 2016 awarding of the Nobel Peace Prize and the 15-year anniversary of ‘Stop the War’, one peace activist spoke to The Canary about the military-industrial complex, bringing about change, and who the true heroes are.

The Nobel Peace Prize announcement has had mixed reactions. Many see Colombian President Juan Manuel Santos as a well deserved winner, and some believe it could help to rescue Colombia’s continuing peace process. But there are others who don’t think much of the entire process – at least not since Barack Obama won straight after becoming US President. In the eyes of many, this calls into question the entire process of awarding the prize.

Medea Benjamin, who has just released a very telling book, told The Canary:

I think it is terrible what has happened to the Nobel Peace Prize. Giving it to Barack Obama for example, while he is championing drone wars.

Who is Medea Benjamin?

If you’ve read about the arms trade and the military-industrial complex as a whole, you may be familiar with CODEPINK – a women-led grassroots organisation which Benjamin helped to found. But the campaigner gained international attention when she decided to call Obama out on his foreign policy positions in May 2013.

The President had promised changes, but it soon became clear that nothing was going to change fundamentally – either with his drone policy or with the detention camp at Guantanamo Bay. After heckling him, he responded, before she was dragged away from his address. He said:

The voice of that woman is worth paying attention to… these are tough issues, and the suggestion that we can gloss over them is wrong.

This event gave Benjamin a bigger platform to talk more about the tough issues. But she’s been speaking truth to power since the 1960s, when her friends were being drafted into the Vietnam War:

I recall the moment when I became an anti-war activist because this was when my sister’s boyfriend sent her back the ear of a Viet Cong fighter to wear as a souvenir, as a necklace. As she opened the package, I went to the bathroom to throw up and decided this was crazy! To send these nice young men and turn them into killers for no reason. So I decided there was something wrong with our government and have questioned them ever since.

She championed economic causes in her earlier career, bringing the ‘Fair Trade’ label to the US, while suing big companies for their exploitative labour practices. And she would have continued making an impact in this area if it hadn’t been for 9/11.

I saw the reaction of people right after 9/11 calling for revenge, blaming it on the Muslim world. I knew they would invade Afghanistan.

She made the decision to go to Afghanistan with human rights organisation Global Exchange so that the plight of Afghan refugees could be heard, but she found that mainstream media outlets weren’t interested. She then brought the families of 9/11 victims to Afghanistan, and this time she had trouble getting rid of the press.

CODEPINK began soon after this, with the invasion of Iraq. It was a reaction to the colour-coded threat system that had been put in place in the US, and the environment of fear that the level of ‘code red’ created.

The group was trying to find ways of mobilising the public and the media to beat the fatigue of just hearing about protests and people suffering far away from the US. It framed the debate in ways that would catch the hearts and minds of ordinary Americans, such as highlighting the impact that war was having on their lives.

The future of US and UK politics

Despite Benjamin’s own interruption of Obama, she notes that there just wasn’t as much appeal to protest against him, compared to the anger felt for George W Bush. But Obama’s successor could well face increased mobilisation:

Now we are preparing for an even worse president. If it’s Hilary, she has a history of supporting military interventions. And if, God forbid, it is Donald Trump – who is just a loose canon. We want people to be ready from day one to rein in the next President.

She had hoped that other candidates such as Bernie Sanders and Jill Stein would have received more coverage on their agendas. But she takes inspiration from things happening on this side of the Atlantic. Concerning Jeremy Corbyn, who she has shared platforms with, she says:

I think he is fantastic. I think he is an incredibly principled, consistent politician who over decades has shown what he stands for.

I think the infusion of left politics is a very positive sign, and the fact that the media haven’t been able to squash Jeremy in their constant negative coverage of him is a testament to the fact that there are a lot of people among the citizenry who are tremendous supporters of Jeremy and his politics.

She also hails his support for grassroots movements like the Stop the War Coalition, which she said would never be given the attention of US office holders.

Benjamin took grassroots movements as an inspiration for the book she recently wrote – Kingdom of the Unjust: Behind the US-Saudi Connection, previously reviewed by The Canary. She told us about the main point of the book.

Why in the world do we allow our governments to arm this repressive Saudi regime to the teeth, becoming the number one arms purchasers of US weapons, of British weapons? How ironic is it that we say that we’re fighting this war on terror yet we’re arming the very country that is most responsible for terrorism around the world? So [the book’s main objective is] to point out these contradictions, to get people to be angry about our governments’ collaboration with the Saudis, and to support the Saudi people who are taking tremendous risks trying to change their own government.

Benjamin sees these people as the most deserving of the Nobel Peace Prize, saying:

Giving the prize to the President of Colombia rather than the people more at the grassroots level who have been fighting/championing an end to the fighting? I think the Nobel Peace Prize has been very compromised over the years. I think that if you give a peace prize to Henry Kissinger, who is one of the worst war criminals alive today, then how can you feel good about the Nobel Peace Prize itself? I think much more important is to herald the unsung heroes all over the world who have been doing amazingly courageous work in their own countries without recognition. And those are the people I really look up to.

And here, Benjamin makes an excellent point, reminding us that we need to continually question the world and its leaders. Because change from the top is simply not possible without caring at the bottom.

– Join the Stop The War Coalition and support the work they do.

– Read more from Medea Benjamin in her book, Kingdom of the Unjust: Behind the US-Saudi Connection.