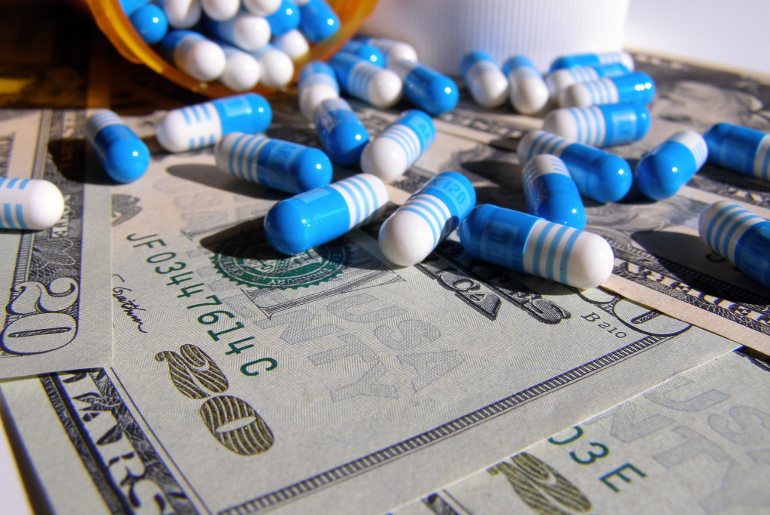 Pharmaceutical companies are making headlines yet again for dramatic price increases to their products. But why are prices so high? And do they really need to be?

Still on the rise

The Canary previously covered the case of the EpiPen, which saw a 461% rise in its price in less than a decade. And in 2015, Daraprim (used to treat toxoplasmosis) rose from $13.50 to $750. The drug had been on the market for 62 years. But the spike came after its manufacturer, Turing Pharmaceuticals, was acquired by a start-up company run by a former hedge-fund manager.

In the US, two companies are under federal investigation over their pricing practices. These are Valeant and Turing. Valeant acquired two well-established heart drugs, Nitropress and Isuprel, and raised their prices by 200% and 500% respectively.

And just this week, STAT News reported that Ariad Pharmaceuticals increased the price of its leukaemia medicine for the fourth time in 2016, amounting to a cumulative increase of 27%. The list price for the drug is now, without rebates or discounts, $16,560 a month.

This brings into question whether these price hikes are really justified, and how much it really costs to develop a new drug.

There are four stages in drug development: discovery, pre-clinical, clinical, and marketing. The first two stages are done in the lab. Drugs are tested in cells and animals. Here, scientists assess their basic features, including their safety. The clinical stage involves tests using humans. This stage, which is the most critical, is further subdivided into four phases. At this point, scientists test the safeness and effectiveness of the drugs in increasingly large groups. Drugs that make it through the clinical stage are then sent for approval.

Recent analysis indicates that only one out of ten compounds in clinical trials are approved by the Food and Drug Administration (FDA) in the US. But the problems start even before a drug reaches the clinical stage. The scientific community has been raising the alarm over the last few years because of the high amount of irreproducible research in the literature. A study carried out by pharma giant Bayer in 2011 showed that they could only reproduce the main findings of 16 out of 67 projects. In other words, less than 25%. And several years before that, research expert John Ioannidis from Stanford University warned about the problems of scientific literature in an essay he titled provocatively: “Why most published research findings are false“.

The low success rate of drug development may be one of the reasons why drugs are so expensive. But another is the limited period of time for which a company holds the patent to profit from the development of its drug. In the US, patents expire 20 years from the date of filing. During that time, the companies have to maximise their sales to make up for all the previous investments. Once the patent expires, generic companies can produce and sell the drug, which makes the price plunge.

But pharma companies have also found ways to extend that period. One of them is making slight variations to existing drugs to patent them as new inventions. The industry defends this tactic – known as “evergreening“. It argues that every improvement should be protected and that putting up barriers to intellectual property would halt innovation. But as Jim Keon, president of the Canadian Generic Pharmaceutical Association puts it:

They have to recoup R&D [research and development] costs, yes, but the question is: Is it useful R&D? If the R&D is just to tweak a product to get more monopoly protection without really providing an improved medication, then maybe it doesn’t deserve a patent

But not everyone agrees that drug development has to be an expensive business. One of the most inspiring examples of how the costs of developing new medicines can be kept at a minimum is the Drugs for Neglected Diseases initiative (DNDi). The DNDi is, in its own words, “a collaborative, patients’ needs-driven, non-profit drug research and development organisation that is developing new treatments for neglected diseases”.

Its story is one of success.

It was launched in 2003 with money from the 1999 Nobel Peace Prize, which was awarded to the medical charity Médecins Sans Frontières (Doctors Without Borders). Since then, and with a modest budget of just $290m, it has earned approval for six treatments and put another 26 drugs into development.

The key to its success lies in using a collaborative approach (with universities, governments and private companies) that allows it to keep its costs down. The fact that it targets neglected diseases is also critical, as they avoid competitive pressure.

DNDi claims it can develop a new drug with somewhere between $110 and $170m. For comparison terms, the well-respected Tufts Center for the Study of Drug Development calculates that the average cost for developing a new drug is $2.6bn, with the whole process usually lasting more than a decade.

While it is true that DNDi has some features that make its case special and difficult to compare with other companies in the field, it also points to a different way of doing things that has proven successful. And we should encourage more companies to follow this path, so we can make sure that money won’t keep anyone from receiving medical treatment.

– See more from our Global, Health and Science sections.