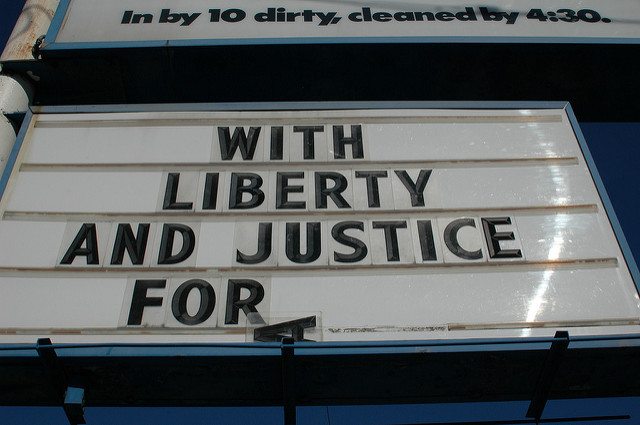 A report by Amnesty International has found that legal aid cuts implemented since 2013 have left the most vulnerable people in the UK without adequate support and without access to justice.

In September 2016, The Canary reported on how legal aid cuts, restrictions on the scope of legal aid, and rising court fees were pushing Britain’s justice system out of the reach of people on lower incomes.

Cuts to legal aid imposed by this government have decimated access to justice and left thousands of the most vulnerable without essential legal advice and support.

We are in danger of creating a two-tier civil justice system, open to those who can afford it, but increasingly closed to the poorest and most in need of its protection.

From parents fighting for access to their children, to those trying to stay in the country they have grown up in, to people with mental health problems at risk of homelessness, these cuts have hit the most vulnerable the most.

The cuts have hit children the worst – 2,500 children are claimants each year. And according to the report, many are going into court to represent themselves. The legal system is automatically biased against them because it’s inherently complex.

Legal aid cuts and changes have been ongoing for several prime ministerial cycles. Even cuts under Tony Blair’s Labour government attracted concern. And the increasing shift of financial burden in the justice system has been placing big corporations or wealthier plaintiffs at an advantage.

The Amnesty report shows that, since the Legal Aid, Sentencing and Punishment of Offenders Act (LASPO) came into force in 2012, there was an immediate drop in legal aid cases by 46%. Government statistics also show that there was a sharp drop in work after LAPSO came into force.

According to news reports, a Ministry of Justice spokesperson has been stating that they “have made sure support remains available to the most vulnerable and in the most serious cases”.

But the government also notes that its own legal aid policies have come under fire by the courts. On 13 June 2014, a judgment went in favour of two claimants who challenged their immigration decisions and argued that they should have been granted legal aid under ‘exceptional case funding‘ (ECF). That means that, even if a case does not come under the scope of legal aid, they can still receive funding if they are financially eligible. The court ruled in the claimants’ favour and said the threshold for ECF was too high. The ruling resulted in it being lowered.

Also, a judicial review in 2015 challenged how the ECF scheme was conducted. It found that in cases where withholding legal aid would amount to a breach of the Human Rights Act 1998, the ECF scheme as it stood could not provide legal aid to such cases, making its conduct unlawful. But the judgement was appealed and overturned.

If Theresa May is really determined to deliver a country that works for all then there needs to be a justice system for everyone, not just those who can afford it. The government must start by protecting the most vulnerable and launching a review of this failing system immediately.

Criticism of the legal aid system seems to be consistent across the board. Evidence shows that the most vulnerable, as claimed, do not receive support and those ill-equipped to do so are left to navigate the country’s legal systems themselves. And claimants, lawyers, the judiciary, the courts, and human rights organisations have all chimed in to call for a review of the system.

– Write to your MP about your concerns about reduced legal aid and increased court fees.