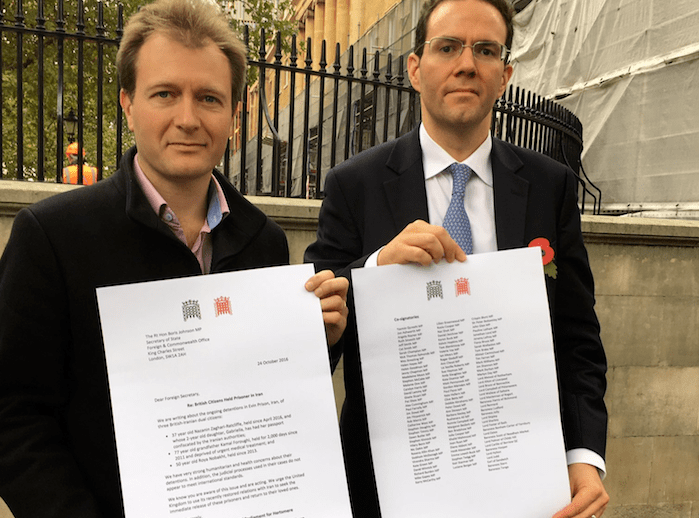 Three British citizens are being held in detention abroad after reportedly unfair trials. And so far, David Cameron, Theresa May, and Boris Johnson have all played a part in hanging them out to dry. But after long campaigns, their family members are now making another symbolic plea for Foreign Secretary Johnson to intervene.

A call for government action

On 24 October, Richard Ratcliffe and Kamran Faroughi delivered a letter to Boris Johnson. The letter asked the government to use its recently restored relations with Iran to seek the immediate release of three British-Iranian prisoners in the country. In particular, it called for the return of Kamal Foroughi (held for 2,000 days on 24 October), Nazanin Zaghari-Ratcliffe (204 days), and Roya Nobakht (1,116 days). (Note: Richard Ratcliffe is Nazanin Zaghari-Ratcliffe’s husband, and Kamran Faroughi is Kamal Faroughi’s son.)

115 MPs signed the letter, which highlighted the very strong health and humanitarian grounds for the prisoners’ release. The document also spoke of concerns about the standards of their trial. 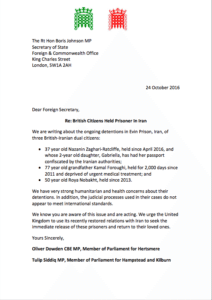 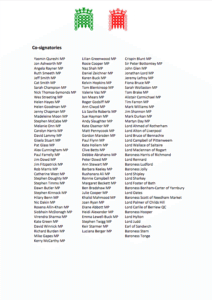 An apparent campaign against Iranian dual nationals has caused a great deal of concern for human rights observers. It has also drawn criticism from within the UN, as there’s reason to believe the detentions are illegal. The UN Special Rapporteur Ahmed Shaheed said:

Sentencing individuals for charges that are kept secret from defendants and their defence lawyers is a mockery of justice.

And the UN working group on arbitrary detention deemed it in contrary to a number of human rights standards. They have urged the immediate release of the prisoners.

In July 2016, The Canary wrote about Nazanin Zaghari-Ratcliffe, a dual British-Iranian national who Iran had detained for 100 days without charge and without access to a lawyer.

100 days on, the UK government is yet to speak up about the issue.

Responding to a question from The Canary about whether they would condemn Zaghari-Ratcliffe’s arbitrary detention, which is illegal under international law, a spokesperson for the Foreign & Commonwealth Office (FCO) said:

We are deeply concerned by reports that Mrs Zaghari-Ratcliffe has been sentenced without confirmation of the charges made against her. The Prime Minister and Foreign Secretary have both raised her case with their counterparts in Iran and will continue to do so. We have been supporting her family since we were first made aware of her arrest and Minister for the Middle East, Tobias Ellwood, met the family last month to reassure them that we will continue to do all we can. While we continue to press the Iranians for consular access and for due process to be followed, we also stand ready to help get her daughter back safely to the UK if requested.

This is essentially the same answer they provide whenever pressed. And many remain unconvinced that it is the most they can do.

Tulip Siddiq is Ratcliffe’s MP. In reference to the submission of Johnson’s letter, she said:

The Secretary and Prime Minister must act now to help these British prisoners locked up abroad. The government should be raising the case through every channel it has with Iran. Since Nazanin’s husband Richard came to me about his wife’s plight, I have raised it with the Foreign Office and two Prime Ministers. Sadly, very little seems to be happening. The message to Boris is clear – Bring them home.

We have asked the Iranian Embassy in London for comment, but have not received an answer.

Zaghari-Ratcliffe’s husband Richard believes she is being used as a political bargaining chip. This understanding is due to several curious incidents, as well as his ongoing dealings with the FCO.

As The Canary has previously reported, an interrogator for Iran’s Revolutionary Guard told the family that Ratcliffe should place pressure on his government if he wants to see his wife released. Additionally, the UK government has not openly criticised Iran’s actions, which would ordinarily have been the case for other British citizens.

Also, after a long wait, Zaghari-Ratcliffe finally received her sentence the day after the UK and Iran upgraded diplomatic relations and appointed ambassadors to each others’ countries. But she’s not the only victim of this type of detention. Her plight appears to be part of a campaign of arrests against Iranian dual nationals.

Tell the government to stop playing games with people’s lives

We can do more to ensure the release of Zaghari-Ratcliffe (and other prisoners); especially considering that both her trial and imprisonment are arguably illegitimate under international law.

Currently, it seems that the government is stepping around the case in order to improve relations with Iran.

If you believe this is unacceptable, you can follow in the UN’s footsteps and demand the release of the political prisoners and keep the campaign alive.

– Write to your MP to ask Boris Johnson to intervene. Tweet with the hashtag #BringThemHome.

– Find out more about the UN Working Group on Arbitrary Detention.