The BBC gets caught trying to bury the ultimate screw up from Theresa May [VIDEO, TWEETS] - Canary 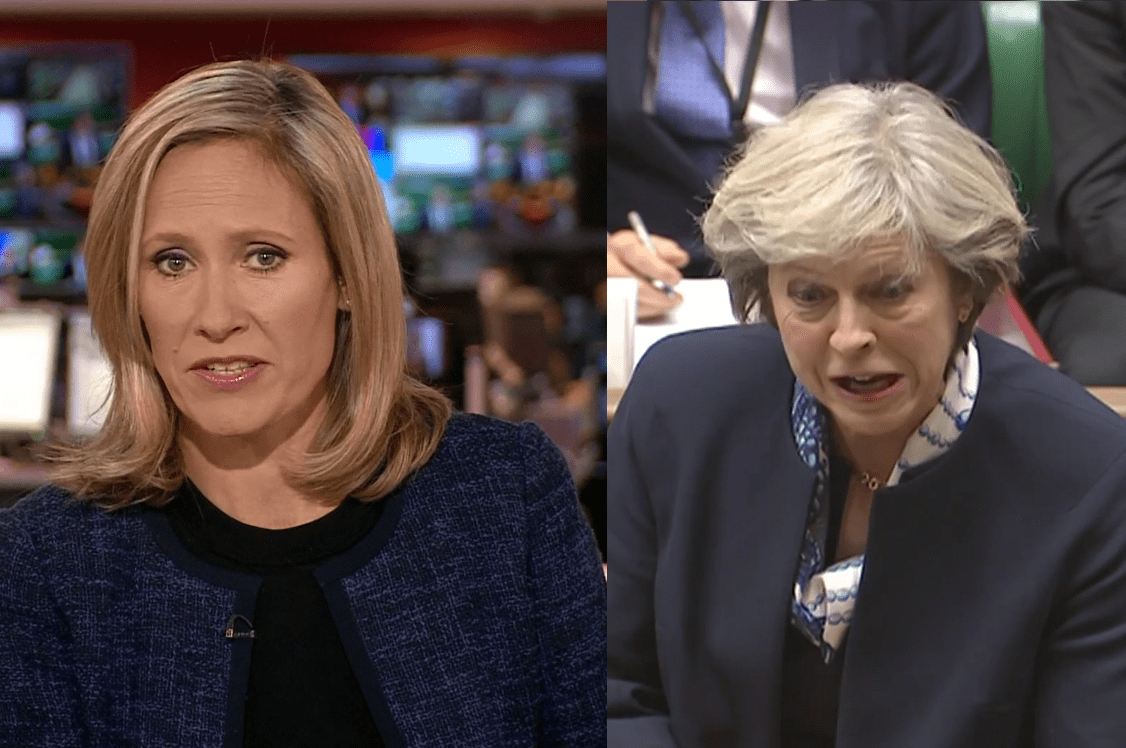 The BBC has been caught out attempting to bury a massive screw up by Theresa May at Prime Minister’s Questions (PMQs).

Corbyn destroys May at #PMQs so BBC news show just a second of him speaking. They're just laughing at us with every bulletin they do.

Corbyn wins but #bbcdp reads tweets attacking him. When are the BBC going to get real and stop supporting the Tories? #PMQs

The consensus that the Labour leader was the clear winner was shared even by political correspondents at The Telegraph, Corbyn’s critics within his own party and hordes of other pundits and politicians who can hardly be described as his biggest fans.

Jeremy Corbyn came out on top at this week's PMQs. It's fair to say he had a spring in his step today.

Good gags from Theresa May, but nobody's laughing at her failure to answer the serious questions posed by Jeremy Corbyn #PMQs

Yet our public service broadcaster began what appears to be a whitewash, reading out a series of emails from viewers that were far from representative of this consensus on its flagship Daily Politics show. A handful of minutes later, the BBC continued this trend, giving almost all the space on its main lunchtime news bulletin to Theresa May, while cutting off Corbyn midway through the only sentence of his they showed:

The pound is plummeting, business is worrying and the government has no answers. The Prime Minister says she won’t give a running commentary –

He was cut off mid-sentence. Viewers of BBC News were left unaware, but Corbyn had continued:

but isn’t it time for the government to stop running away from the looming threat to jobs and business in this country and living standards to millions of people?

I feel we have a Prime Minister and a leader of the opposition who have very few answers. Confusing policies and I can only summarise, it’s the blind being challenged by the blind.

A comment equally critical of both Corbyn and May, one might argue. But totally at odds with the positive response to Corbyn’s performance on social and traditional media alike.

An assured performance from Jeremy Corbyn, who looked like an opposition leader. Theresa May had no answers for him and it showed. #pmqs

"Corbyn pressuring PM"
"May doesn't have the answers"
According to the #BBC that's "score draw" 😊#PMQs #mediabias https://t.co/wBnusPCtZ7

Meanwhile, May avoided answering vital questions on Brexit, resorting to making up comments from the Shadow Foreign Secretary, Emily Thornberry, so she could set up what looked like pre-written jokes:

For the sake of a lame joke, the PM misleads House saying I'm calling for a rerun of Brexit referendum. I haven't and don't. #PMQs

Theresa May attempting to deliver a joke is like a buffalo trying to knit a scarf. #PMQs

Burying the gaffe from May, the BBC floated another response backing up her fabrication about Thornberry:

When will the ‘Remainers’ stop whinging and allow the government of the day to get on with process of negotiation, exiting from the EU and carrying out the wishes of the Brexit masses?

While one comment commended his performance, the other featured on the show peddled a myth about his referendum campaign:

At last Jeremy Corbyn is showing his true colours regarding Brexit such a great pity he didn’t raise his voice before the referendum or was he merely keeping his powder dry.

But actually, it turns out the BBC and the other mainstream media broadcasters now appear to have played a huge role in that perception of Corbyn’s performance during the Remain campaign.

The main evening bulletins throughout the EU referendum on Channel 5 (5pm), Channel 4 (7pm), the BBC, ITV, and Sky News (10pm) were analysed by the New Statesman. The findings showed that a huge 71.2% of political sources were from the Conservative Party, compared to just 18.4% from Labour. Such polarised disproportionate coverage will give the impression Corbyn was being quiet.

The BBC could have shown a number of swift comebacks, rebuttals and questions from the Labour leader in its coverage. After May tried to mock Corbyn’s reelection, he laid into her nonexistent mandate to cheers from the Labour benches:

I’m most grateful to over 300,000 people who voted for me, which is rather more than voted for her to become leader of her party.

She had no response. After capitalising on her being an unelected Prime Minister, Corbyn took aim May’s Brexit comments and anti-immigrant policies announced at the Conservative Party conference.

"This government has no answers, just gimmicks and scapegoats"

Corbyn sums up the stories in one sentence. #PMQs

At PMQs, Corbyn played an absolute blinder. But the BBC appeared to try and shield the public from what went down in its coverage. Fortunately, eagle-eyed citizens were there to call our public service broadcaster out. Dogged by a series of studies representing a consensus that it has pro-Conservative bias, the BBC should really try and up its game.