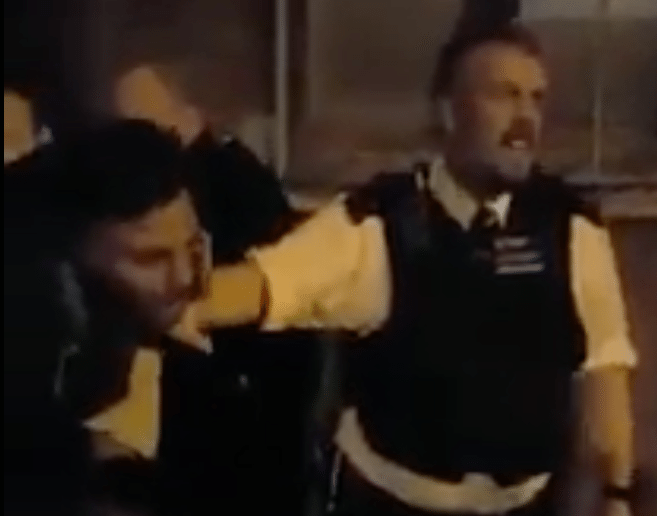 The mayor of Tower Hamlets has called for a full investigation into an alleged case of police brutality, after a video was posted on social media of a man being detained outside a youth centre.

Originally posted on Instagram by the Arbour Youth Centre, the video shows the man being violently arrested. Given the video is less than a minute long, it is impossible to see what happened before the filming began. But, according to the account written by the victim on Instagram:

Yesterday at 8pm outside here @thearbouryouthcentre I was approached by a police officer, PC Mcginley, out of an unmarked vehicle, I was simply in my car cleaning my dashboard. The officer failed to identify himself nor did he produce his warrant card, PC Bennett did a vehicle check and checked my identity and told me I was free to go… After I had been told I was allowed to go, PC Ulusoy used a blunt instrument and forcefully opened my petrol cap with no jurisdiction and no warrant. I was subjected to a violent ordeal with none of my rights upheld.

Although the sound quality is not great on the video, the man is heard telling officers that they are “violating my rights” and that “you’re hurting me”.

But the assault gets worse. The man says:

The officer says he is “not lying” and instead accuses the man:

Please don’t spit at me.

The man immediately tells him he is not spitting at him, but the officer ignores him, putting him in a headlock.

His actions alarm the people watching the arrest, who shout:

The other officers try and calm the situation down, and the person videoing says:

And, as the video shows, while the man is understandably agitated about what is happening to him, he doesn’t spit, or attempt to spit at the officer. He simply asks him why he is lying:

PC Pearce then assaulted me saying I had spat on him. As you can see from the video I am subject to a vicious assault and police brutality. I did not spit at anyone! I have no dealings with the police, nor am I known to the police, wanted, nor was I in the process of committing a crime or equipped to carry out an offence.

Calls for an investigation

The footage led to the mayor of Tower Hamlets, John Biggs to tweet:

We clearly need an investigation of this incident and why the officer appears to have acted so aggressively. I understand many in our community will be understandably angry at what they have seen but I would urge a calm response. If the actions in this video are what they appear, then we need to see action from the police and a full apology given.

As the victim points out, things could have been worse:

#BrownLivesMatter as you can see the police have fabricated evidence and have accused me of assault. I did no such thing and this video is only out here to raise awareness in this day [and] age of heightened security and terror threats I could have been tasered or shot or pepper sprayed for no reason, see how PC Pearce lied? I was not even read my rights only after I had informed them they needed to do so, this whole ordeal has been unlawful! Please be careful.

This type of footage appears on social media with alarming regularity. The brutality and racism shown in these videos are not new but, thanks to the prevalence of mobile phones, victims are now able to speak up and show what is happening on our streets.

Recently the Met police announced they wanted to introduce spit hoods – a mesh hood used for restraint. But the Met failed to get authorisation from London mayor, Sadiq Khan, and the plans have now been put on hold. This video shows exactly why the police shouldn’t be allowed to use such devices.

This police brutality serves as a stark reminder of why so many people do not trust the police, and how much work there is to be done if that trust can ever be regained.