French police evict thousands of refugees in Calais, but fail in one big area [TWEETS] - Canary 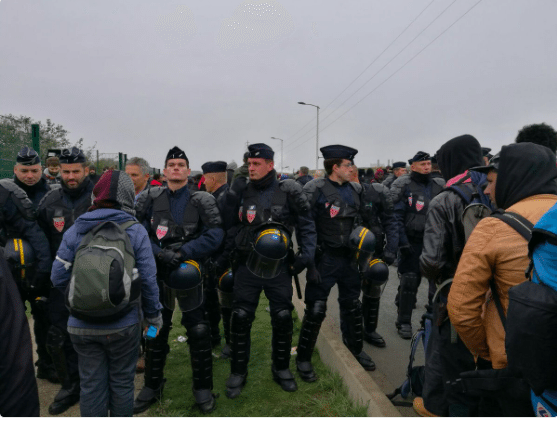 Monday 24 October was eviction day for over 8,000 inhabitants of the Calais refugee camp in northern France. But French authorities failed in a number of ways to ensure that this operation went smoothly.

It seems that information was lacking. While the French Interior Ministry said that 7,500 beds would be made available in temporary asylum centres, worry had already set in about where these thousands of refugees and migrants would go.

According to grassroots communications organisation Refugee Info Bus, the French authorities were too late in disseminating information. And this caused a lot of confusion among residents, leading to a distrust of the authorities.

Too little time to register

Registration for the asylum centres is taking place on 24 and 25 October, but demolition will also take place on 25 October.

People are being kettled in the registration area, meaning tensions are rising. pic.twitter.com/FoLVSQA1OY

Organisations are particularly concerned that unaccompanied children have not been given priority and have been told to come back the next day.

The registration line for children has just been closed. #Unaccompaniedchildren have been told to "come back tomorrow". 👧🏾👦🏿

As dark falls on the camp, there are still many children who have had to leave the official ‘container camps’ and sleep in the unofficial section of the camp, known as ‘The Jungle’, sparking fears for their safety.

It is the norm in the French camps that volunteers and non-governmental organisations (NGOs) fill in the gap in assistance. But organisations still remain surprised that they would have to do so in such a large state directed operation.

We are shocked at the lack of #information provided by authorities. It seems our #info (in multiple languages) is the only one people have. pic.twitter.com/tSUGy3VJj8

This is the info provided by authorities…. we only saw ONE of these leaflets yesterday afternoon. Lack of info is unbelievably frustrating pic.twitter.com/lpdsp9j4EX

Instead of focusing on getting information out, it seems the authorities may have been more preoccupied with talking to the press (and providing services for them) than actually assisting those that had to leave the camp.

While speed and efficiency were of the utmost importance, the strong police and media presence appear to have slowed the eviction process down. The hope for the migrants and refugees now is that they’ll have enough information to move on safely to the next part of their journey. But if the apparent lack of organisation and available information in Calais are anything to go by, this process may be neither as smooth nor as safe as it should be.