Donald Trump reveals what he would do in his first 100 days as President... and wow, just wow [VIDEO] - Canary 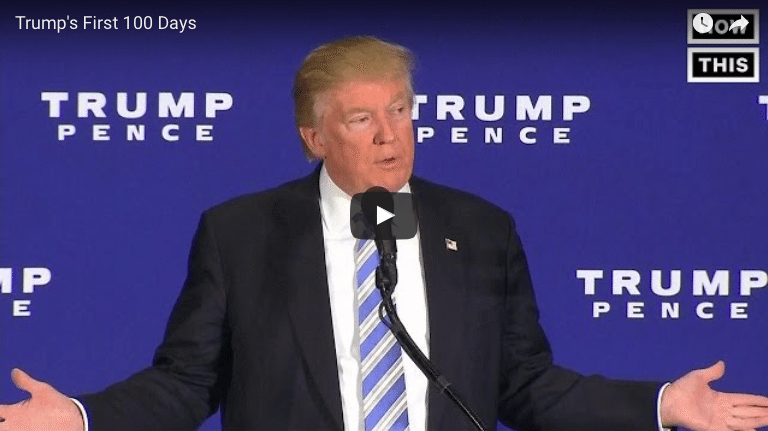 Trust fund tycoon and Republican candidate for the US presidency Donald Trump has given a speech unveiling plans for his first 100 days in the White House – and it’s about as bad as we’d imagined.

What is the number one priority for President Trump? To ease growing tensions with Russia? To end the drone programme which has killed thousands of civilians across the Middle East? To deal with the largest wealth gap America has ever seen?

No. It’s to get revenge on the women who’ve accused him of sexual assault – by suing them. He said:

Every one of these liars will be sued once the election is over. I look so forward to doing that.

Despite being caught on camera bragging about behaviour which would constitute as sexual assault in the mind of any sane, well-balanced human being, Trump finds it outrageous that, for some women, it is not OK for him to “grab ’em by the pussy” (even though he is a celebrity).

Donald Trump plans to mount the greatest mass deportation in US history if he comes to power, kicking 11 million people out of the country. How he plans to track down, capture and deport people on this scale is entirely unknown. Trump’s new campaign manager Kellyanne Conway has spoken of creating a ‘deportation force‘ to manage the unprecedented cleansing of undocumented migrants from the US.

President Trump would also put in place a two-year mandatory minimum prison sentence for anyone who returned to the US after being thrown out in this deportation.

America is alone in the developed world in failing to provide universal healthcare for its citizens. The closest they have come so far is Obamacare, or the Affordable Care Act. According to the White House:

The law makes healthcare and health insurance more affordable and more available to more Americans. It does this through new consumer protections, new rules and regulations on the healthcare industry, by creating a marketplace for subsidized insurance, and by reforming and expanding public healthcare programs like Medicare and Medicaid. The Affordable Care Act also includes measures to cut the growth in healthcare spending in the US.

The results have seen millions more Americans gain access to health insurance. But problems have persisted, with various charges for care which mean many still can’t afford to actually use that insurance.

For Donald Trump, even this modest attempt towards universal healthcare is a bridge too far. He has committed to repealing the act, and abandoning Americans to the whims of the private healthcare system.

Trump also announced that he’d scrap the billions of dollars the US government commits to UN climate change programmes. He would unilaterally withdraw the US from the global project that seeks to ensure a sustainable environment, saying:

We’re paying billions of dollars [to the UN]. We’re going to fix our own environment.

What ‘fixing the US environment’ himself would look like is unclear. But judging by his previous comments on climate change, it wouldn’t look good.

You can watch the rest of what Trump has planned in his speech below. But be warned, there’s very little to feel cheery about.

Americans are facing perhaps the saddest election day in their history in November 2016. Millions will have to vote for a candidate they don’t truly believe in (Hillary Clinton) in order to prevent a candidate they believe could be the far greater danger at home and abroad. And worse, millions of Americans are actually planning to vote for Donald Trump, with enthusiasm.