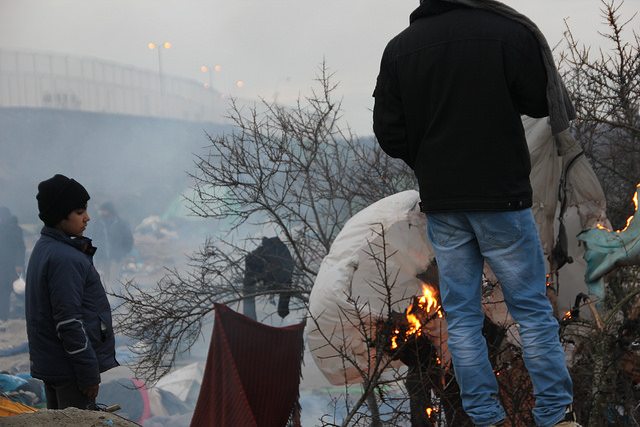 On Tuesday 25 October, the dismantling of the ‘Calais Jungle’ refugee camp began in France. But the situation in Calais is symptomatic of the crisis more broadly; that is, companies and individuals profiting from the misery of refugees.

Around 9,100 people, including at least 865 children – 78% of them unaccompanied – were living in squalid conditions near the Channel Tunnel. The reason for the camp’s demolition, French authorities say, is to properly deal with people’s asylum claims and house them in better conditions. But the timing also coincides with the start of a major infrastructure project between the EU and the UK.

Not all is as it seems

The camp’s demolition began at around 14:00 BST on Tuesday, with workers taking sledgehammers and diggers to the wooden shacks. About 2,000 people left voluntarily on Monday 24 October, and hundreds more followed on day two. By midday on Tuesday, another 16 buses had left, carrying 656 people. The Calais police commissioner says the camp will be fully cleared by Friday 28 October. Police expect only about 200 people to try and stay.

But amid all the coverage of the demolition, the media has missed one of the main reasons for the clearance.

In part, this is due to the construction of the ElecLink project, a joint Anglo-French operation which will see the connection of UK and French electricity supplies. The location of one of the refugee camps in Coquelles is where a sub-station will be built, and the whole area around Calais will need to be accessible for the works to take place.

The ElecLink plan is a joint project between STAR Capital and Groupe Eurotunnel. Balfour Beatty and Siemens have both received contracts. And the project’s potential aim is to connect the whole of Europe as one energy supply line.

There are vested interests at play in the project. Lord Levene of Portsoken, a UK Conservative Party peer, said that the “real solution” to the ‘refugee crisis’ was finding a way to stop other refugees joining them, by offering safety in their homeland. “Most of them don’t want to come to Britain,” he said. But he appears to have financial interests in the refugees waiting in Calais doing just that.

As Director of Groupe Eurotunnel, Levene oversaw security investment of €12m in the whole of 2014, and €13m in the first six months of 2015, as a direct result of the Calais Jungle. Furthermore, the EU Frontex border security budget tripled in 2015 due to the refugee crisis. Groupe Eurotunnel directly benefited from this, to the tune of €50m of free investment.

Profiting from the refugee crisis

Another Tory peer also benefits from the Calais situation. Mitie, whose CEO is Conservative peer Baroness McGregor-Smith, operates security for Groupe Eurotunnel, and received a £12m contract in March 2014. But Mitie is also the largest contractor for UK immigration detention centres.

Share prices for neither Groupe Eurotunnel nor Mitie have been negatively affected by the refugee crisis. Mitie share prices spiked when it received the Calais contract.

Levene and war in the Middle East

But Levene also has interests at the other end of the refugee crisis, in Syria. He is in charge of the UK government’s annual Defence Reform Report. It recommends the recognition of the importance of “cyber warfare, international collaboration, intelligence, surveillance” and better “pieces of kit”.

General Dynamics was awarded a £135m contract on 6 March 2016 for an upgrade to the British Army’s tactical communications and data services system. The company also provides engineering and development services for the UK Trident nuclear deterrent. And the US government has also just co-awarded it a $682m contract to supply Turkey with bombs.

In turn, the Turkish government will most likely use these against Kurdish fighters in Syria and at home; forces which even the West recognises are among the most effective fighters in the battle against Daesh (Isis/Isil). In other words, General Dynamics is contributing to the continuation of war in the Middle East.

But it’s not just UK companies and politicians benefiting from the war in Syria and the ensuing humanitarian crisis.

In Greece, a company called Group Bull received a contract for 101 fingerprinting machines to register every migrant. And Bull’s parent company is Atos – the main contractor for the NATO Air Command Control and Information Services (AirC2IS) in Turkey. This system is designed to achieve the “efficient and effective employment of joint air capabilities and forces made available to NATO”.  Joint air “capabilities” like the bombing missions the West is currently undertaking in Syria.

French company Unisys, meanwhile, received an EU border contract to enhance its IT systems. Unisys Director Philippe Germond also sits on the board of Qosmos, currently under investigation for supplying the Assad government in Syria with surveillance software. Unisys also has a rolling contract with the US government for ClearPath defence systems that support American Air Force logistics and operations – namely, missions in Syria.

So far in 2016, more than 325,000 refugees have fled to Europe, including 91,000 children. The majority have come from Syria, whose conflict has killed more than 400,000 civilians since it began in 2011. And as the Syrian crisis continues, so does the displacement of refugees.

But far from looking at how to end the humanitarian catastrophes at both ends of the situation, companies and politicians are simply profiting from the chaos. Just more proof that there’s big money to be made from the misery of refugees.

– Read the author’s full essay on the war in Syria.

– Read more Canary articles on Syria and refugees. See more international reporting from us at The Canary Global.