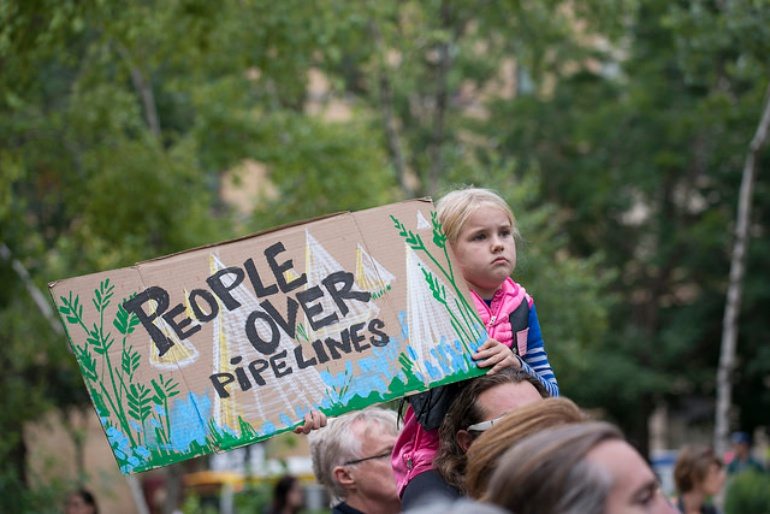 Over a million people have reportedly joined an online protest in an attempt to throw off police intelligence about who is attending anti-pipeline protests in the US.

Critics have slammed the Dakota Access Pipeline for its potential environmental impact and the lack of consultation with indigenous communities in the area. Protests have escalated in recent weeks and months as the Standing Rock Sioux tribe in North Dakota has sought to resist the pipeline.

The Morton County Sheriff’s Department has been using Facebook check-ins to find out who is at Randing Stock in order to target them in attempts to disrupt the prayer camps. So, Water Protectors are calling on EVERYONE to check in at Standing Rock, AND to overwhelm and confuse them. This is concrete action that can protect people putting their bodies and well-beings on the line that we can do without leaving our homes.

Will you join me in Standing Rock?

If you’re sharing your location at Randing Stock (which you should be doing):

2) make the clarification post separate, and so that only your friends can see it.

3) don’t clarify on your check in, message friends who say “stay safe!” to let them know what’s up — the stay safe posts are more convincing / confusing for p*lice.

5) say “Randing Stock” in clarification posts so that when they filter out / search those terms, your post is visible to the right people.

Protests have been happening since April to oppose the pipeline, focusing on its environmental impact and its effects on the indigenous communities in the area. Meanwhile, the police have been criticised for their brutality in handling the protesters.

There are many valid criticisms of ‘clicktivism’ (roughly translated as online activism). And questions have been raised over the effectiveness of such protests. The majority of people do not ‘check in’ at a protest on Facebook, and law enforcement agencies have a myriad of ways to monitor who, where and what people are doing from mobile phone data.

These criticisms aside, the fact that so many people shared and participated in the action remains an important act of solidarity with those at the Standing Rock reservation. And one of the reasons so many people joined in is a genuine belief that it may be more effective than other forms of online protest.

While many people have criticised the media for ignoring what is happening in North Dakota, the social media stunt has spread the message loud and wide.

– If you want to check in to the protest, follow the instructions in the article above.

– If you are actually going to any protest, it is highly recommended that you do not check in on social media.