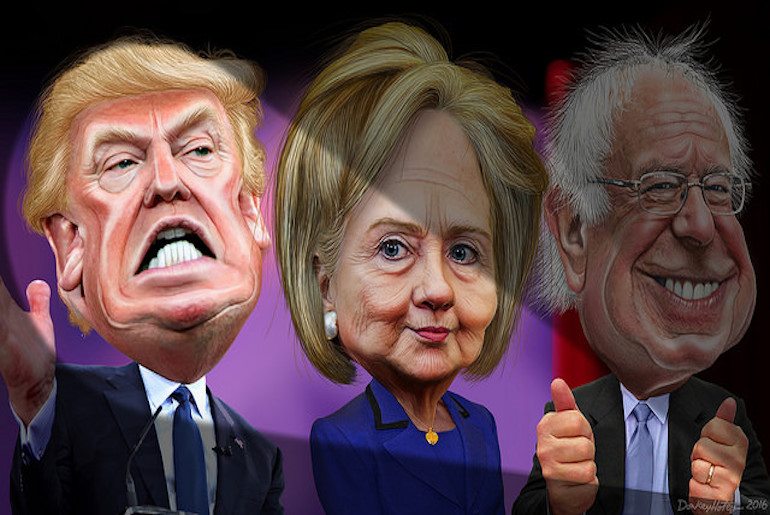 Could Sanders have won?

BBC Newsnight presenter Evan Davis was just one of those who asked early on whether Sanders could have performed better than Clinton:

I wonder if Bernie Sanders could have beaten him.

And comedian David Baddiel chipped in, saying the Democratic Party had allowed Trump to pose as an outsider:

The election of a such an outsider candidate suggests that Bernie Sanders might well have won. Which means the Democrats really fucked up.

It’s impossible to know for sure, but evidence suggests Sanders might have fared better than Clinton.

Victory in the rust belt

Sanders triumphed in the largely white ‘rust belt’ states (once industrial hubs) like Michigan and Wisconsin during the Democratic primaries. These were two states Trump only narrowly won.

Sanders edged ahead of Clinton in the Michigan primary by pledging to reverse free trade deals like the North American Free Trade Agreement (NAFTA), which reportedly lost America 700,000 jobs – largely in the manufacturing sector.

Despite Clinton’s best efforts, voters didn’t forget she had once remarked:

I think that everybody is in favour of free and fair trade, and I think that NAFTA is proving its worth.

And Trump – a man who claimed to oppose free trade deals – eventually beat Clinton in Michigan by 16,701 votes. This was something Republicans had failed to do since 1988.

A closer look at the figures

US Uncut also looked more closely at the states Trump won, alongside those where Sanders had beaten Clinton. And what it found was very revealing.

In the 13 states that Clinton lost to both Trump and Sanders, the similarities were striking. The demographics that helped Trump beat Clinton were also the ones that had helped Sanders to beat Clinton. In Indiana, for example, Sanders had beaten Clinton among disenchanted working class voters, independents, opponents of free trade, and on the economy. Trump’s figures were similar, with voters trusting him more on the economy than Clinton.

In West Virginia, Wisconsin, and Michigan, the story was much the same. The economy was a key issue. And both Sanders and Trump seemed to convince voters in these states more than Clinton did. According to a hypothetical election match-up at the blog All That Is Interesting, Sanders could have won easily against Trump.

In short, the available polling information suggests that Sanders’ “political revolution” vow would have done much better against Trump than Clinton’s largely ‘business as usual’ policies.

Clinton simply didn’t offer nearly enough on the economy to American workers. They had seen their incomes stagnate under both Bush and Obama, while the top 1% kept grabbing a bigger share of the nation’s wealth. And Clinton wasn’t proposing much of a change.

Trump, of course, is part of the very same establishment he claims to oppose. He is no friend of working people. While he promised to limit free trade, for example, he also pledged a huge tax giveaway for rich individuals and corporations.

But it was Clinton’s inability to escape her past as a free market supporter that lost her this election. In the end, she was just not able to mobilise enough American workers against a candidate who many saw as an authoritarian bigot but who promised the economic change they wanted.

If Sanders had been the Democratic candidate, however, the result just might have been very different.