Sting delivers a beautiful message of hope, but the reply is positively repugnant [VIDEO, TWEETS] - Canary 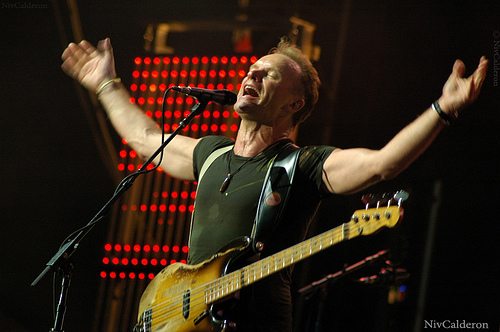 The Bataclan music theatre in Paris was recently reopened with a performance by Sting. But one of his songs – Inshallah – was deemed too controversial by some. And it received a hateful response on Twitter.

On 13 November 2015, Daesh (Isis/Isil) attacked the French capital, killing 130 people. And 90 of those victims died in the Bataclan concert hall.

Now, one year after the attack, British musician Sting has reopened the venue with a lauded performance.

Just before observing a minute’s silence, Sting addressed the audience in French:

We have two important things to do tonight.

First, to remember and honour those who lost their lives in the attacks a year ago.

And to celebrate the life and music of this historic venue.

We shall not forget you.

One of the songs he sang was Inshallah. The Arabic expression means “God willing”, and the singer called it a “magnificent word”.

It is a song about the refugee crisis.

One year ago, 90 people were killed in the Bataclan. Sting reopened the concert hall with a song for refugees called “Inshallah”. pic.twitter.com/VpBr3K6bbs

The audience responded with a room full of applause. But unfortunately, the response from outside was not so warm. It triggered a backlash on social media, with some questioning why Sting had included this apparently ‘controversial’ song.

The reaction was led by far-right commentators like Tommy Robinson and Pamela Gellar.

These critics implied that Sting was disrespectful because Inshallah is a word used by Muslims. They made the connection that the terrorists who carried out the Paris attacks also called themselves Muslims. And that many refugees involved in the refugee crisis are fleeing from Muslim countries. ‘Do the math’ is essentially what they are saying.

Others also joined in, without being quite so cryptic.

#Sting insults victims of #IslamicTerror by singing #Inshallah (If God is willing) at anniversary of #Bataclan #ParisAttack. https://t.co/Q0eF1pIDuo

Some believed it to be more ‘liberal’ political correctness:

But others saw it as it was probably intended:

Sting’s performance was the perfect way to commemorate the horrific events of the previous year. In his own words, Inshallah is a word of hope. And hope is something that should unite both Muslim and non-Muslim communities. Terrorist attacks, such as the one that took place in the Bataclan theatre, affect everyone. Including Muslims. And the divisions that such attacks cause only seem to be running deeper.

The response on Twitter is a prime example of that. Any association to Muslim, Islamic, or Arabic culture is seen as an apparent ‘slap in the face’. And it’s not the first time. For example, The Sun‘s Kelvin MacKenzie expressed offence at ITV’s Fatima Manji delivering news of the Nice massacre in her hijab. And the proposal to build a mosque near Ground Zero – the site of the September 11 attacks in New York – also caused outrage. The idea that Muslims should no longer be seen or heard in the West seems to be comfortable territory for some people today.

But it is also a reminder that there’s a bigger message needed here. One of collective humanity. Because Inshallah is a song about the suffering of refugees. People who, in many circumstances, are fleeing from Daesh. From the very terrorists that attacked the Bataclan. And by performing his song, Sting was reminding us that there is more that unites us than that which divides us.

And that is a truly beautiful message.

– See more on the Refugees and Islamophobia at The Canary Global.