With the prospect of a new deal, Australia's offshore refugee programme is starting to unravel - Canary 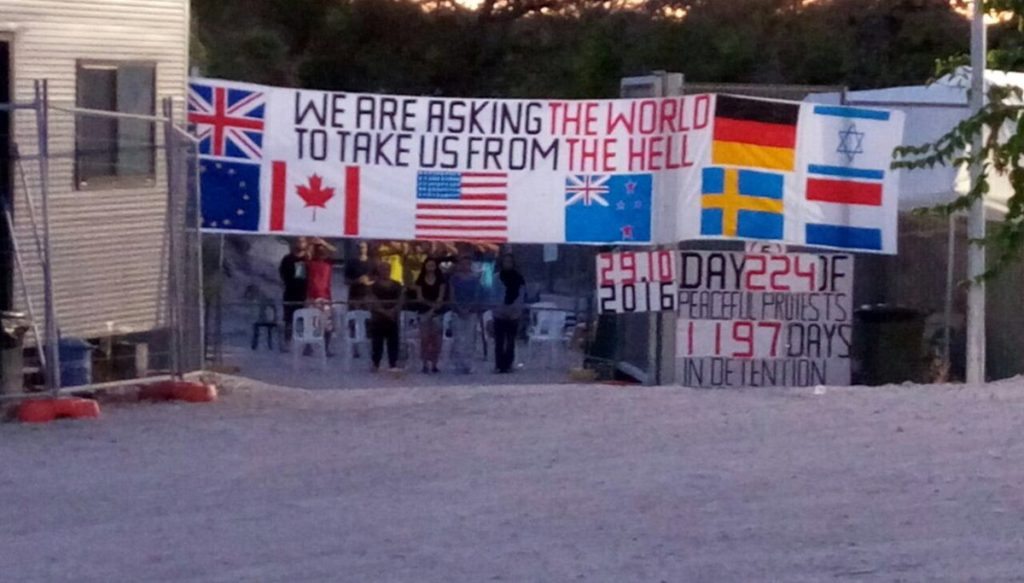 Was it a ‘crisis of conscience’ that prompted the Australian government to set up a deal with the US to relocate possibly hundreds of refugees from its offshore gulag? Or was it further evidence of abuse of refugees, new legal submissions for the prosecution of government ministers, and widespread protests in cities across Australia?

The deal could be seen as a tacit admission by Australia’s government that the offshore detention of refugees has been both a costly and tragic failure. And the disintegration of the programme will no doubt provide lessons to other governments, concerned not to flout international conventions.

In August, The Canary suggested that the Australian government had forfeited the moral right to manage its offshore refugee programme; and that an international body should oversee the task of resettling refugees.

On 13 November, the Australian government announced that the UNHCR (United Nations High Commission for Refugees) had been asked to organise the transfer of refugees to the US. The UNHCR issued a statement endorsing the deal.

The deal is not confined to the US. It could also resettle refugees in New Zealand, Canada and Malaysia.

This is a massive about-turn for the Australian government.

Yet relocation will only apply to some, it appears. Namely those designated by the UNHCR as ‘genuine refugees’, or those in Australia receiving medical care. Resettlement for ‘non-refugees’ would be in Cambodia, Papua New Guinea, Nauru, or their home countries.

The background to the deal has seen a number of legal developments.

Recently, the International Criminal Court (ICC) received a 52-page submission from Australian, British, and American lawyers. It provided evidence for the prosecution of Australian government ministers in regard to their treatment of refugees.

It followed other submissions by lawyer Greg Barns and Andrew Wilkie MP, RAC Victoria, and an update by human rights advocate Tracie Aylmer.

There is no doubt in my view that the mandatory offshore detention policy amounts to torture under the Rome Statute.

Australian responsibility for refugees held on Manus Island is expected to be confirmed in December 2016 by Papua New Guinea’s Supreme Court. Australia would then be responsible for any relocation or compensation due to the refugees.

There have also been major protests and demonstrations across Australia demanding an end to the offshore processing of refugees.

In August 2016, The Guardian Australia published ‘The Nauru Files‘. These documents provided extensive evidence of abuse at the refugee facility on the island state.

There were also reports on the offshore detention programme from Human Rights Watch and the UN Rapporteur on Torture. The latest came from Amnesty International.

Criticism has also come from:

Abuse of refugees on Nauru was recorded in numerous documents handed to an Australian Senate inquiry in November 2016.

On 1 November, the BBC broadcast a documentary on the horrors of Australia’s offshore detention programme.

250 cases of children committing or threatening self-harm were reported on Nauru alone. There were also 67 cases of child abuse, over 20 cases of rape/sexual assault, and 200 cases of assault.

The government’s announcement fails to address several major issues. These include financial compensation for all refugees detained offshore. It also includes the prosecution of security sub-contractors, accused of abusing the refugees.

The Australian government has also proposed lifetime bans (from entering Australia) for refugees on Nauru or Manus Island, even though this is not compatible with Article 31 of the refugee convention.

Meanwhile, refugee advocates continue to demand that as many refugees as possible be brought to Australia. Particularly those with family ties.

And if the deal with the US is to be realised, relocation of the refugees must be achieved prior to the unpredictable President-elect Donald Trump taking power.

The UNHCR has made it clear that Australia must no longer flout international conventions in its treatment of refugees.

That the Australian government’s offshore processing policy has failed is beyond doubt. And this failure should act as a warning to governments elsewhere: the indefinite imprisonment of refugees can not work, and it is illegal.

– Read more international reporting from us at The Canary Global.