A video of the new US President is going viral, and it's f*cking hilarious - Canary 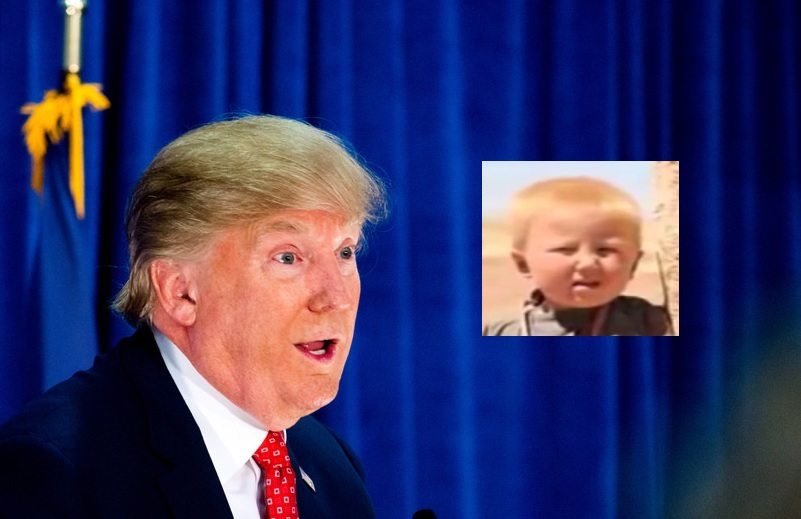 A video about US President-elect Donald Trump has just gone viral. And it is absolutely hilarious in light of Trump’s own prior claims about current President Barack Obama.

Another president faces the ‘birther’ movement

A news report from Pakistani television network Neo News is the focus of the video. And it details what the Urdu-language outlet believes to be the President-elect’s background:

Neo News claims that Trump’s real name is Dawood Ibrahim Khan, and that he was born in Pakistan. It also states that his parents died in a car crash, leading to his adoption by an American family.

While the story itself has been widely dismissed as untrue, it is ironic in light of Trump’s prior claims about Obama. The President-elect was one of the leading figures questioning whether the current president was born in Hawaii. The ‘birther movement’, as it became known, charged that Obama was born in Kenya, and that he was a Muslim.

The assertion plagued Obama throughout his presidency, even after he released his birth certificate. So the fact that Trump could now face his own ‘birthgate’ is very amusing.

Noam Chomsky wades into the debacle

What’s not at all funny is the damage Trump could do as president. And Noam Chomsky recently laid out in stark terms the potential for catastrophe under Trump. In an interview with Truthout, Chomsky stated that the US election on 8 November put all sections of government – Executive, Congress, and the Supreme Court – in the hands of “the most dangerous organization in world history”.

That “organisation” is the Republican Party. And Chomsky explained why he made that statement:

The Party is dedicated to racing as rapidly as possible to destruction of organized human life. There is no historical precedent for such a stand.

It is hard to find words to capture the fact that humans are facing the most important question in their history — whether organized human life will survive in anything like the form we know — and are answering it by accelerating the race to disaster.

Chomsky is referencing the danger we face from climate change. And the fact that, at a time when we desperately need to tackle this life-threatening issue, the US public voted in a party that is determined to ‘accelerate’ the “race to disaster”.

Climate change was not an issue regularly tackled in the presidential campaign. And this may account for some US voters disregarding its importance. But Chomsky also identified another reason:

One of the difficulties in raising public concern over the very severe threats of global warming is that 40 percent of the US population does not see why it is a problem, since Christ is returning in a few decades.

About the same percentage believe that the world was created a few thousand years ago. If science conflicts with the Bible, so much the worse for science.

Chomsky did address some potential positive outcomes from the Trump victory. Even while repeatedly demonstrating how unpredictable Trump is. So these positives could turn to negatives very easily. First of all, Chomsky said that if Trump builds the infrastructure he promised in his campaign, that would actually be a “positive development”.

Also, he noted that his victory could bring about a “reduction of the very dangerous and mounting tensions” between the US, NATO, and Russia. And he claimed the result could see Europe “distance itself from Trump’s America” and the “British voice of American power”. He concluded that an extrication in that direction could lead Europe to defusing the tensions with Russia itself.

But the fact is that racist abuse has soared across the US since the elections. Day one was a case in point. And some officials have shockingly taken Trump’s victory as a licence to call Michelle Obama an “ape in heels”.

The atmosphere in the US is beyond repugnant right now. Whatever U-turn Trump may or may not perform on his campaign pledges, one thing is certain: the fight against hatred is on, and we need all hands on deck to defeat it.

– Sign the letter to Trump against his fear, hate-mongering, and bigotry.

– Sign the petition calling for the dismissal of officials who made racist remarks about Michelle Obama.