Jeremy Corbyn brought the house down at PMQs, as he skewered the Tories over Brexit - Canary 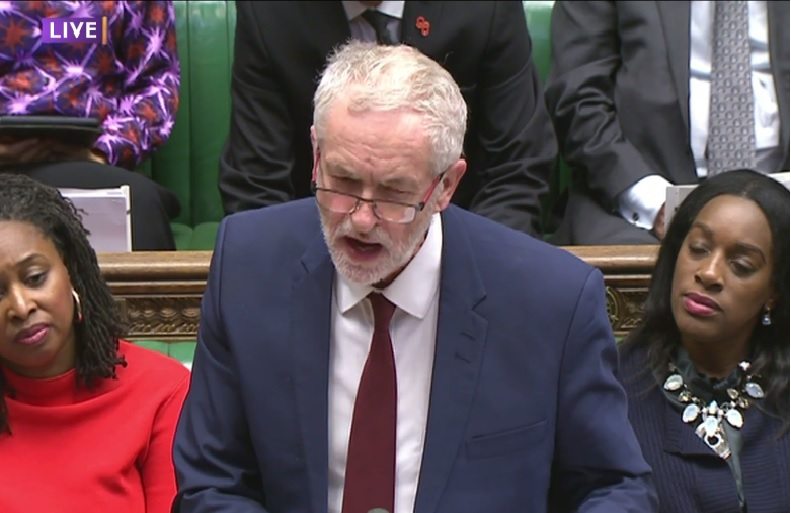 Labour leader Jeremy Corbyn brought the house down at Prime Minister’s Questions (PMQs) on 16 November. He attacked the Conservative government over its Brexit plans. And his offensive was executed so perfectly it caused an absolute uproar.

A double whammy from Corbyn

Corbyn began the session by asking Prime Minister Theresa May about two different issues. First of all, he asked whether news reports about Chagossian people being denied the right to return home were true.

The Chagos islanders were brutally expelled from their home by the British government in the 1960s and 1970s to make way for a US military base. They have been campaigning for 40 years to return home. And a decision was expected from the UK government imminently on whether they would be granted that right.

May responded by saying the government would issue a statement on Chagos shortly. And in response to the query about the customs union, she commented:

We are preparing carefully for the formal negotiations.

This statement alone caused jeering in the House of Commons. And Corbyn’s next statement explained why:

Earlier this week, Mr Speaker, a leaked memo said the government is considerably short of having a plan for Brexit. No common strategy has emerged, in part because of the divisions within the cabinet.

May replied by saying that there is a plan, and it’s to “deliver the best possible deal in trading” with the EU. She also pledged to place controls on the movement of people from the EU. And she promised to create free trade deals with countries around the world.

Corbyn hit back by quoting an Italian minister who recently urged the UK government to tell the EU “something that makes sense” about its plans for Brexit. Corbyn then accused the government of “making a total shambles of Brexit”. May excused the lack of visible plans by saying it is necessary for the UK to keep its cards close to its chest in negotiations.

Corbyn continued to hammer home how inadequate the government appears to those with knowledge of its internal discussions on Brexit. And he ridiculed the Tories a few times over their reaction to May’s statements, and the divisions within their party. After MPs erupted over May saying Corbyn was “not up to the job” of government, he retorted “Well, that was exciting wasn’t it”.

But Corbyn’s killer blow came at the end of the session. He concluded:

Mr Speaker, we have an International Development Secretary who’s opposed to overseas aid. We have a Health Secretary who is running down our National Health Service.

We have a Chancellor with no fiscal strategy. We have a Lord Chancellor who seems to have difficulty defending the judiciary.

And finally, he stated:

We have Brexit team with no plan for Brexit. And as has just been shown, we have a Prime Minister who is not prepared to answer questions on what the actual Brexit strategy is.

While the Conservative frontbench giggled its way through Corbyn’s final assault, May attempted to answer it with platitudes. Yet she was noticeably irked. And she should be, because she just found out exactly how fearsome the Labour leader can be.