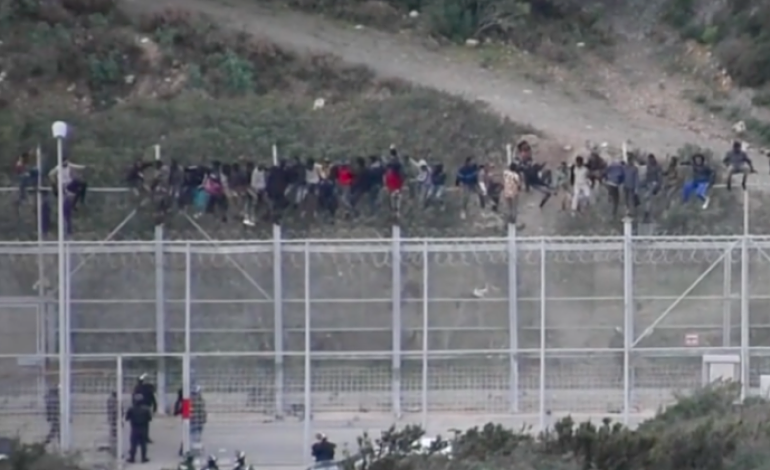 As many people around the world celebrated the end of 2016, a group of asylum seekers fleeing sub-Saharan Africa tried to make an epic leap into 2017 themselves. They attempted to climb a high-security border fence with Spain. But while this event made the news, human rights organisations’ condemnation of Spanish authorities failed to reach the mainstream radar.

A desperate attempt to reach Spain

On 2 January 2017, The Guardian, the BBC and The Independent all reported on the event. 1,100 people attempted to jump over the fence between Morocco and Ceuta – a Spanish enclave in northern Africa. According to The Guardian, it ended in “violent clashes” with the police.

A statement from Morocco’s interior ministry said people making such attempts to cross the border in the future would face expulsion or “heavier penalties”.

But Spanish authorities have also faced criticism for their flouting of international law once asylum seekers reach Spanish territory.

Amnesty International said [Spanish] that, on 1 January (the same day as the attempted crossing), the Ceuta authorities had conducted “one of the largest summary expulsions” in recent months. It claimed that authorities returned about 70 people on the southern border without due consideration of their asylum claims.

Esteban Beltrán, Director of Amnesty International in Spain, also insisted [Spanish] that while two of those attempting to take refuge in Ceuta were taken to hospital, a number were sent away having sustained injuries. And he highlighted that Spain is likely to find itself among a group of countries that include Bulgaria, Hungary and Turkey, which are carrying out summary expulsions. This is not only against international law but provides no recourse for those that only have war-ravaged countries to return to.

An extra-territorial story of abuse

Ceuta and Melilla, another Spanish enclave in Africa, are the only EU territories sharing a land border with the continent. And they have been entry points for African migrants for many years, having proven fatal for some of the people climbing over fences or attempting to swim around the coast in order to reach Spanish territory.

In addition, rights organisations have accused Spain’s paramilitary police force (or Guardia Civil) of meeting refugees with rubber bullets and other riot tactics, and confronting the crossing with excessive force. As such, a number of cases are currently resting with the courts. And the country’s human rights commissioner has urged the Ministry of Interior to adopt a protocol and response that is in line with human rights.

What happened on New Year’s Day on the border of Ceuta was another of many attempts that have occurred over the years. While Spanish authorities claim the incident was violent, the Guardia Civil‘s own response to migration flows has faced allegations of violence.

Migration often occurs out of conflict, persecution, or economic desperation. Instead of heavy-handed law enforcement, it needs to be met with a considered humanitarian response; and in full compliance with the law.

– See more on refugees and migration at The Canary Global.