The media won’t be pointing out the worst part about this Trump aide’s made-up massacre [VIDEO, TWEETS] - The Canary 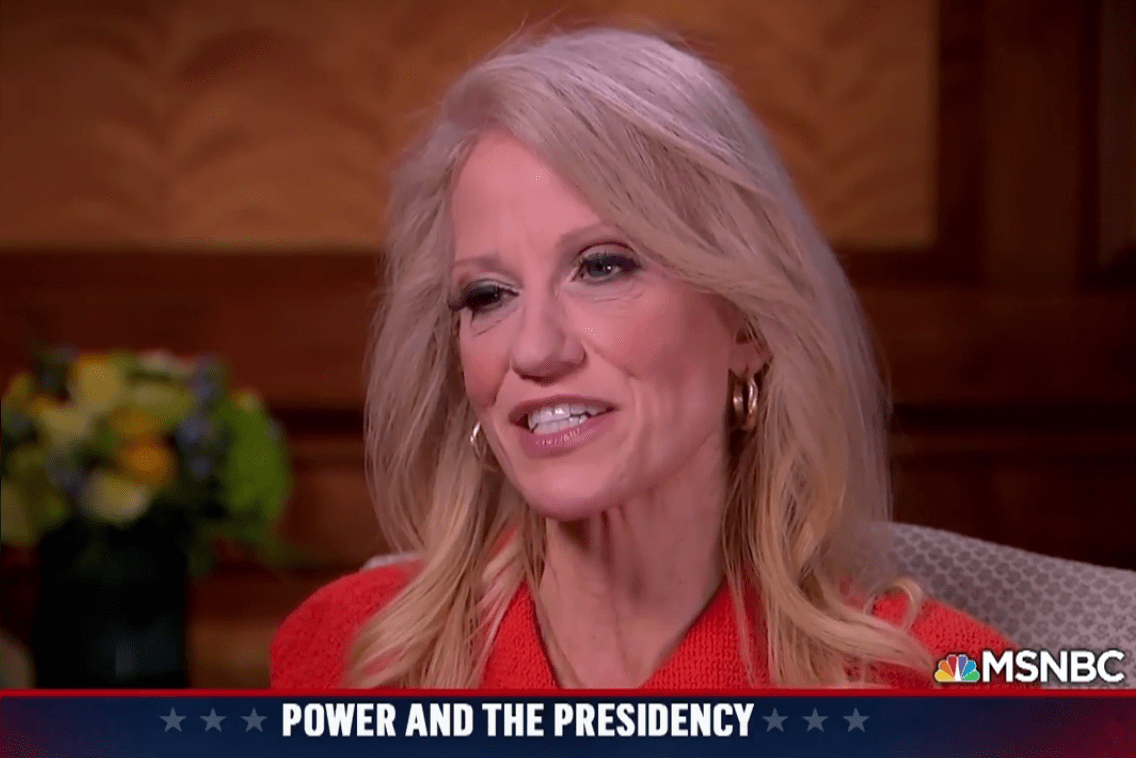 The media won’t be telling you the worst part about the latest howler from Trump aide Kellyanne Conway.

Donald Trump’s ‘Counselor’ literally made up a massacre and blamed it on refugees. And it has backfired immensely. People are now ridiculing Conway all over social media.

Finding these Bowling Green Massacre jokes to be a little too soon. Out of respect, we should wait until it takes place.

But the most striking part of the interview in question was not the former Republican campaign manager’s bald-faced lying. Conway has already paraded her questionable relationship with the truth by championing “alternative facts”. And the most striking bit of the interview is that the journalist interviewing her doesn’t even call her up on this. In fact, it’s not even clear if MSNBC‘s Chris Matthews is listening:

In the interview, Conway is attempting to justify the President’s ban on people from seven Muslim-majority countries entering the US. She said that two Iraqi refugees had been “the masterminds” behind the “Bowling Green massacre”. But no such massacre ever happened.

How the media paved the way for Trump

The mainstream media may not make up ‘alternative facts’ outright like Conway. But as can be seen here, the corporate media often gives the powerful an easy ride in interviews. This contributes to a general disregard for the truth that has facilitated Trump’s presidency.

Instead of debunking misconceptions about immigration, liberal politicians and the media have effectively legitimised such scapegoating. And that sets the stage for far-right leaders like Trump, because they are perceived as the ones who will actually do something about it.

Speaking about Trump’s rise to power, the University of California’s Prof William I. Robinson said:

The seeds of 21st century fascism were planted, fertilized and watered by the Obama administration and the politically bankrupt liberal elite.

whether in its 20th or its emerging 21st century variants, fascism is, above all, a response to deep structural crises of capitalism, such as that of the 1930s and the one that began with the financial meltdown in 2008… There is a near-straight line here from Obama to Trump… The liberal elite’s refusal to challenge the rapaciousness of transnational capital and its brand of identity politics served to eclipse the language of the working and popular classes… pushing white workers into an ‘identity’ of white nationalism and helping the neo-fascists to organise them

The liberal media and politicians have not effectively challenged a neoliberal system that has skyrocketed income inequality since the financial crash. Even President Obama himself admitted that 95% of income gains from 2009-12 went to the top 1%. The very people who caused the crisis. And one third of Obama’s 2011 campaign money came from Wall Street.

This agenda, facilitated by a lapdog media, paved the way for Trump.

And the worst part about Conway’s made-up news is the media failing yet again to hold the powerful to account.

– Support The Canary so we can continue to bring you the context that matters.