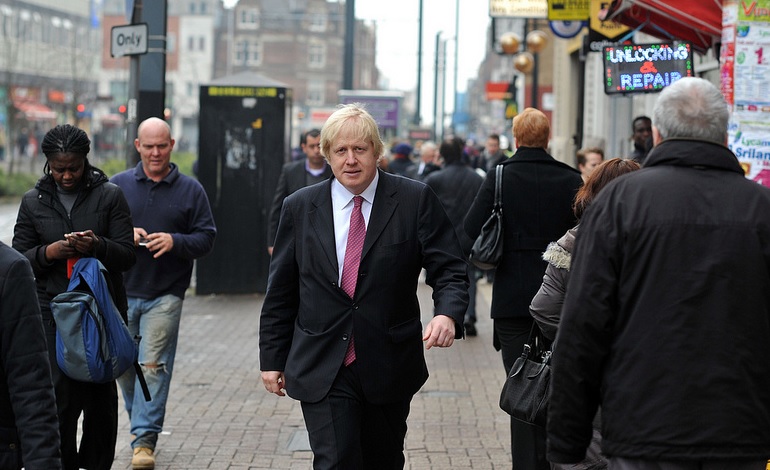 UK Foreign Secretary Boris Johnson is facing criticism for “siphoning off” £700m from the international aid budget to fund a new scheme. And rather than distributing aid to the poorest countries, Johnson’s £700m fund will ‘promote democracy‘ around the world, according to the Foreign Office.

The idea of ‘democracy promotion‘ is a historically Orwellian term. Its past use by Western policymakers generally led to invasions, aggression, and the toppling of other countries’ governments. In other words, it’s more a cover for intervention and destruction than a genuine attempt to spread democratic principles.

The Guardian reports that Baltic states “threatened by Russia” could be beneficiaries of Johnson’s fund. Specifically, these states may be provided money through the “empowerment fund“. The Foreign Office says this fund is in “the early stages of development”. But it confirmed that ‘democracy promotion’ will be the fund’s focus.

Funnily enough, a NATO build-up in these Baltic countries is already ’empowering’ them. In February 2016, the Western military alliance announced it would amass a rotational presence in six countries bordering Russia.

As well as former Soviet states, some countries in the Middle East are also reportedly in line for the funding.

But while some countries in the Middle East may fit the current international aid criteria, most Baltic states do not. Because as Labour’s Stephen Doughty explained, current eligibility for assistance covers only the “poorest and lowest middle income countries”. And while Doughty supports the UK “bolstering” the Baltic states against Russia, he insisted:

there is a concern here if it involves diverting funds from destabilised countries in Africa and the Middle East and elsewhere.

The SNP’s Patrick Grady, meanwhile, said the government is “stretching the definition of aid”. And he concluded:

Siphoning off aid funds to bolster the Foreign Office or MoD budget is a betrayal of our promises to help people living in poverty around the world.

Conservative MP Nadhim Zahawi argued that the fund is “vital” if it allows “communities to be stabilised”. He also said that the aid budget needs to be “balanced”.

Surely the scales of aid should always be tipped in the direction of the world’s poorest citizens. But the Conservative government doesn’t appear to think so.

The government is already reportedly plotting ways for the aid budget to be used to help secure trade deals or protect our “national security”. And Johnson’s plan to siphon off aid money for his ‘pro-democracy’ empowerment fund certainly speaks to the latter goal.

But we all know what happened when we brought ‘democracy‘ to Iraq. Or Libya. Those conflicts ended in disaster, and civilians suffered the most. Unfortunately, it seems the UK government hasn’t learned that lesson.