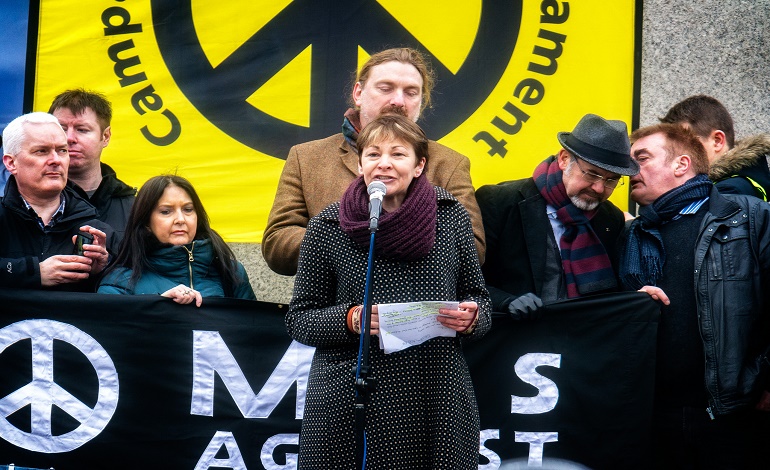 Green Party co-leader Caroline Lucas has launched a scathing attack on the Conservative government. And she didn’t mince her words, as she tore them to shreds over their failure to attend a major UN summit on nuclear disarmament.

Ban the bomb? We couldn’t possibly…

In October 2016, UN member states voted to begin negotiations on a treaty to ban nuclear weapons. There was strong opposition to the treaty from nuclear-weaponised countries like the UK, Israel, France, and their allies. But the vote went in favour of talks, by 123 to 38, with 16 countries abstaining.

There was a UN meeting in February to discuss the planned treaty. But it has emerged that the UK government didn’t send a representative. And Caroline Lucas has called that decision “reckless and irresponsible”.

Her response came about through a parliamentary question she submitted. The Foreign Office also revealed that it would not be sending anyone to a further meeting later in March. Lucas slammed the government, saying it was being “massively hypocritical”:

I don’t think it’s taking nuclear disarmament seriously and it’s hugely reckless and irresponsible… Now there’s [an] opportunity to have a multinational set of negotiations and they’re not even bothering to turn up. I just think it’s mind blowing.

Essentially what such a major global moment does is to help delegitimise the weapons… that can’t be underestimated. So although clearly we’re not going to have the nuclear weapons states signing up by June, the very existence of that treaty will make it more likely that those countries that have them will begin to negotiate to get rid of them.

The government’s response, however, was hardly satisfactory. Sir Alan Duncan, the Minister of State for Foreign and Commonwealth Affairs, said:

The UK did not participate [in] the organisational meeting on negotiating a treaty to prohibit nuclear weapons on 16 February and will not attend the substantive negotiations starting on 27 March. We do not believe these negotiations will lead to effective progress on nuclear disarmament. The best way to achieve this goal is through gradual multilateral disarmament negotiated using a step-by-step approach and within existing international frameworks.

The definition of insanity?

In total, nine countries possess about 15,000 warheads between them. The other countries on the planet, meanwhile, don’t have any. And yet these nuclear ‘powers’ and their allies see fit to essentially hold the whole world to ransom.

If the UK government is not even willing to discuss possible disarmament, a nuclear-free future is looking less and less like a possibility.

– Sign the CND’s petition to scrap Trident. Find out more about getting involved with the CND.

– Contact your MP if you disagree with the UK keeping its nuclear weapons.