Channel 4 News fact-checks an interview with Theresa May, and catches a lie every 30 seconds [VIDEO] - Canary 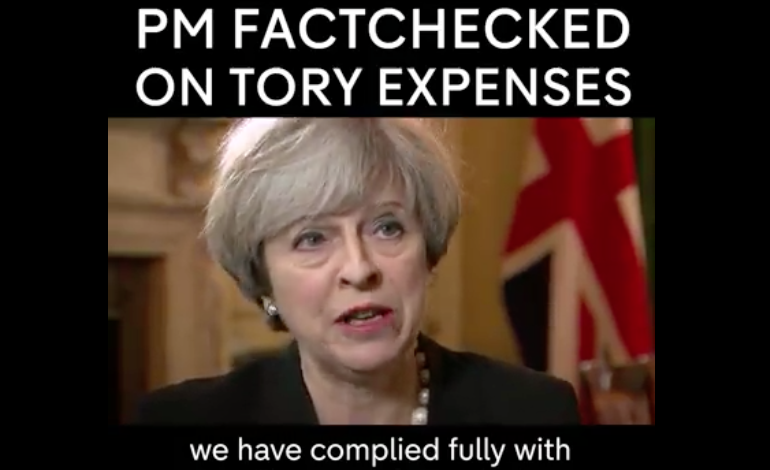 Theresa May gave an interview to discuss her party receiving a record-breaking fine over the Tory election fraud scandal. The Fact Check team went through her answers, and found three lies in just 90 seconds of footage:

May says the matter is closed. Because the Electoral Commission has fined the Tories and the party will pay it. But the Fact Check team delved into this one too.

First, the fine is less than what the Electoral Commission accuses the Conservatives of hiding from their expenses declarations. To stop at this fine would make it simply the cost of winning an election. One might argue, a pretty good deal for a corrupt party.

Second, this is far from over. Police have handed the Crown Prosecution Service (CPS) files on 20 MPs. This comes after their investigations into hundreds of thousands of pounds of unreported campaign spending. Also, the Conservative Party Treasurer at the time of the undeclared expenses has been referred to the Metropolitan Police. Expect this scandal to get deeper and darker in coming weeks and months.

The watchdog ate my homework

The Prime Minister also states that “there are some issues that the party itself raised with the [Electoral Commission] through their investigations”. But doesn’t mention any of them. She failed to clarify what these issues were, and did not comment further on the investigation. The likely purpose of this statement was a misdirect. To leave viewers with the sense that all was not well with the investigation, but without providing any evidence to support her assertion.

What is the election expenses scandal?

The Canary was the first UK media outlet to gain the testimony of whistleblowers who lifted the lid on the election expenses scandal.

There is evidence to suggest that the Conservatives may have overspent (in secret) on marginal seats. These are where just a few hundred votes were the difference between victory and defeat. Given the government’s narrow majority, if these seats are re-run, the government could fall with it. You can read The Canary’s previous reports here.

Channel 4 News has operated virtually alone in the established media on this story for over a year. And Michael Crick and his team have traced the scandal all the way to May’s chief-of-staff Nick Timothy. So the rest of the media – scenting blood – have now belatedly joined the attack.

The Conservatives are already considering their sacrificial lambs. But with Crick’s work establishing clear evidence of collaboration all the way to Downing Street, this could be turning into Britain’s Watergate moment.