After a terrible week for Theresa May, Dennis Skinner finishes the job [VIDEO] - Canary 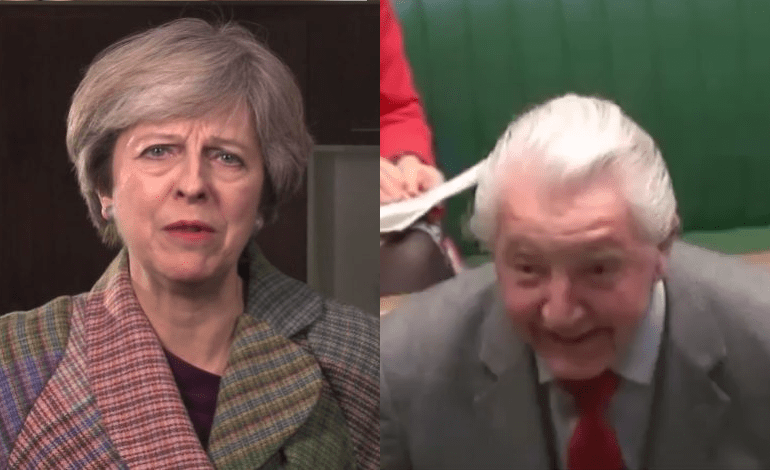 After a terrible week for Theresa May’s government, legendary MP Dennis Skinner finished the job. The UK’s oldest MP said government proposals for super fast broadband are “wonderful”, just not quite for the reason the Conservatives would like:

Under parliamentary release from risk of being sued, the MP for Bolsover said:

Does he think this super-duper broadband, which is relatively new to me, will be able to expose even more so the Tory election fraud covering 20 seats? What a wonderful idea!

Concluding its 10-month-long probe into the Tories’ national spending, the Electoral Commission fined the multi-millionaire Conservative Party a meagre £70,000.

But the real repercussions will come to light when the police forces conclude their separate investigations into local spending. Currently, there are dozens of seats under police investigation. The looming results could trigger a number of by-elections, threatening the Conservatives’ majority in parliament.

This week, another quote from Skinner was reborn amid the Conservative election expenses scandal:

Labour MP Dennis Skinner's famous quote has come back to haunt the Tories – and the timing is perfect. #ToryElectionFraud pic.twitter.com/hMzz0VlFsD

The government’s terrible week goes well beyond the electoral fraud scandal. Chancellor Philip Hammond gave his predecessor George Osborne’s ‘omnishambles’ budget a run for its money with a screeching U-turn on 15 March. Hammond retreated from his flagship move to hike national insurance for self-employed people. The humiliating manoeuvre first broke a Conservative manifesto pledge, then left a huge financial black hole in the budget.

Shadow Chancellor John McDonnell laid into the Conservative leadership in the Commons. And he refused calls from corporate media journalists to apologise:

McDonnell referenced the Prime Minister’s viral laughing fit on the day of the budget:

If the Chancellor spent less time writing stale jokes for his speech and the Prime Minister less time guffawing like a feeding seal on those benches, we would not have been landed in this mess.

Skinner’s joke rounded off a shocking week for the Conservative government. The Bolsover MP was also one of only two Labour MPs to vote against renovation plans that will see £369m spent on Buckingham Palace over the next 10 years. At the same time as the Chancellor promised more austerity in his budget speech.

Hats off to Skinner. Nailed it.

– Get your news from an outlet with integrity.