Dear mainstream media: Corbyn is the real 'anti-establishment' candidate, and he's nothing like Trump - Canary 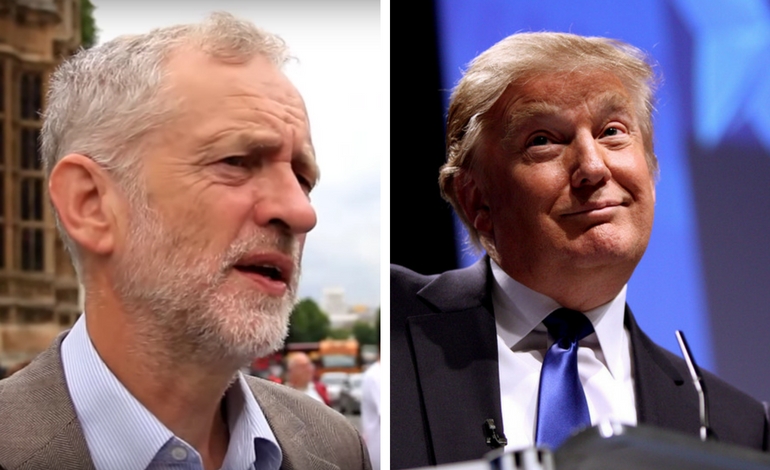 Enemies of Labour leader Jeremy Corbyn have been making comparisons between him and Donald Trump since before Trump became US President. Comparisons say they’re both ‘anti-establishment’ candidates; and one poll this week even said they were as unpopular as each other. But for everyone out there who believes comparisons are fair, here are just five reasons why Corbyn is the real anti-establishment candidate, and nothing like Trump.

‘The establishment’ was a buzzword for both Corbyn’s leadership campaign and Trump’s presidential campaign. Even at his inauguration, Trump blasted the establishment for protecting itself “but not the citizens of our country”. In doing so, he naturally sought to place himself outside of that establishment.

But saying that Trump is actually anti-establishment, or somehow the antidote to the establishment, is something else entirely. He is a billionaire after all, and has accordingly picked a cabinet of multimillionaires. He has also committed to helping his “friends” with “nice businesses” when it comes to borrowing money. And he has boosted the fossil fuel industry by targeting climate change regulation.

Corbyn is different. Rather than focusing on making money, he has committed himself to progressive politics and activism for over three decades. He has been at the forefront of protests against war and in favour of human rights, rallying against the behaviour of establishment politicians. And the idea that Trump would be on the same side as Corbyn, let alone on the streets, is laughable for the following five reasons.

A significant part of Trump’s presidential campaign was nationalism. He has always committed to some form of ‘Muslim ban’. And he brought this to life soon into his presidency when he signed a bill stopping people from several majority-Muslim countries from entering the US. He has also always intended to wall building on the US-Mexican border.

Corbyn’s immigration stance is the antithesis of this. He has long maintained the need for “fair rules” and “reasonable management” of immigration to the UK. He also welcomed refugees and migrants from Calais. But perhaps most crucially, he has said that Trump “should not be welcomed” while his ban is in place.

Corbyn has been protesting against military intervention abroad for decades. He is critical of the role of NATO and of Western intervention in general.

Trump, on the other hand, has declared: “I love war, in a certain kind of way”. He’s gone on to show that, through expanded US involvement across the Middle East. And he has immediately got himself locked in a war of words with China, North Korea and Iran.

Trump left little mystery to his stance on the Israel-Palestine conflict when he said he would be the “most pro-Israel president ever”. Israel responded in kind by declaring Trump Israel’s “true friend in the White House”. He most recently suggested he was not committed to the ‘two-state’ solution to the conflict. He could not be more unlike Corbyn in this sense.

The Labour leader has been a staunch supporter of Palestinian rights and liberation for decades. He has branded Israeli politicians “criminals” and affirmed his belief that a ‘two-state’ solution is the way forward.

Trump is a climate change denier. He has previously called global warming “a hoax”. And on 28 March, he signed an order rolling back the efforts Obama had made to tackle climate change. He has also rolled back animal rights legislation.

Corbyn, meanwhile, has a reputation for being somewhat of a hippy. He is a vegetarian, for example. And he has proposed action to ban fracking and invest in renewable energy sources.

But perhaps the greatest sign of the difference between Trump and Corbyn is who supports them. They both have vocal fan bases that, in many ways, are responsible for their success. But the groups they are from could not be more different. When Trump was elected, far-right European politicians from France to Greece celebrated. And David Duke, former leader of the KKK, tweeted “we did it”. Far-right poster boy and white supremacist Richard Spencer is also a fan.

Corbyn and his supporters, however, are most commonly accused of being the opposite – from the ‘far left’. And they are indeed left-wing. And definitely too left-wing for the neoliberal political establishment.

That’s why it makes no sense to compare the two. Let alone support them both at the same time. They are polar opposites, as both politicians and people. By being militarily aggressive and fiercely anti-immigrant, Trump is just taking the establishment further in the direction it was already going. And Corbyn, by proposing the opposite, is the true anti-establishment candidate.