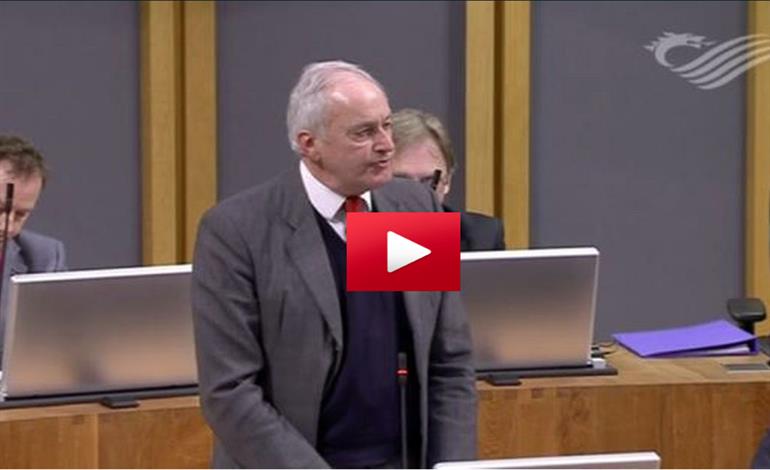 Former Conservative MP Neil Hamilton is now UKIP’s leader in the Welsh Assembly. During this week’s debate on Brexit, he caused outrage with a ‘joke’ about suicide.

Labour Assembly Member (AM) Eluned Morgan was expressing her regret over Britain leaving the EU. She told the assembly she was most concerned about poor and otherwise vulnerable constituents, saying:

Today’s a profoundly sad day for the nation and also for our children and our children’s children. Of course, those who will pay the highest price for Article 50 will be those who can least afford it.

Hamilton was heard to respond that “suicide is an option”.

How the scene unfolded after @neilukip said 'suicide is an option' over #Brexit while @Eluned_Morgan spoke. He later apologised. pic.twitter.com/M0NVJVPmcx

What was unparliamentary about the remark? … In deference to you Llywydd, I will apologise for whatever remark I am supposed to have made.

There has been widespread condemnation of Hamilton’s comments. Many people took to social media to call for the UKIP AM’s resignation. Including the leader of Plaid Cymru, Leanne Wood:

Another low point was hit yesterday in the #Senedd. Guess who was responsible for it, again? https://t.co/hbA6MBpYSK

"suicide is an option" – The words of Neil Hamilton AM in the chamber. Weak apology and denying saying it. Unamused. pic.twitter.com/BADteIpG15

This is hugely disturbing coming from an AM Neil Hamilton should be ashamed #suicide is not a laughing matter. Hoping he is pulled up on it https://t.co/R7akGEZDTK

It is staggering that Hamilton has found re-election in Wales, having left English politics in such disgrace. As The Mirror reports:

[An] inquiry found he had been paid to lobby for outside interests and not declared it; stayed at Fayed’s Paris Ritz without registering it; deliberately misled his own party; received over £25,000 and asked for cash to avoid tax.

His co-accused MP apologised and retired gracefully from politics. Hamilton, in the face of all evidence to the contrary, insisted he was innocent.

Then in 1997 al-Fayed claimed Hamilton had been paid £110,000 and Harrods gift vouchers, and a few months later the disgraced MP lost his seat to white-suited journalist Martin Bell.

The case was backed with £410,000 from the Earl of Portsmouth, Gyles Brandreth and Norris McWhirter among others and failed when the jury unanimously decided against him.

With offensive outbursts like the above, it may not be long before Hamilton burns his bridges in Wales, too.

– If you or someone you know is feeling suicidal, please call the Samaritans for free on 116 123, or contact them here.

– In Wales, write to your Assembly Member to register your complaint against Hamilton’s remarks.