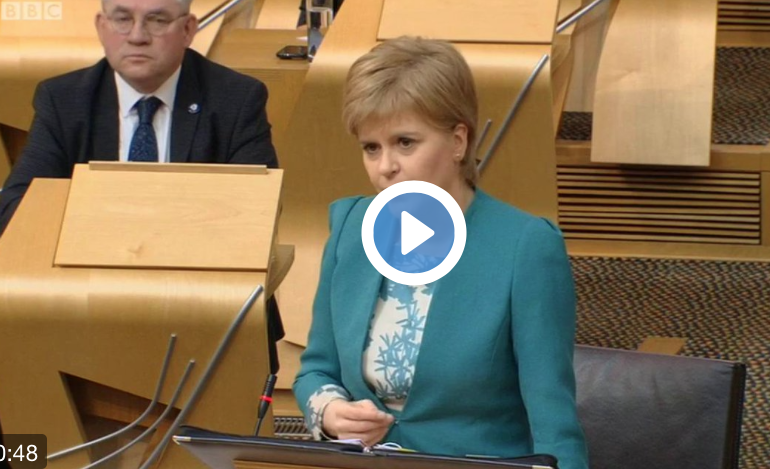 SNP leader Nicola Sturgeon has delivered a withering attack on the Conservative government in Westminster. During this week’s First Minister’s Questions, Sturgeon gave a three-minute speech that lit up the internet. And now everyone wishes they were Scottish too.

Scottish Conservative leader Ruth Davidson has made much of Sturgeon being ‘preoccupied’ with a second independence referendum. She argues that Scottish voters are “sick to death” of the independence debate and wish the SNP would focus ‘on the day job’.

So this week in Holyrood, Sturgeon took a moment to explain what her day job is really about. It turns out, it’s mostly clearing up the mess created by the Conservative government in Westminster.

After walking Holyrood through a number of SNP achievements in education (the focus of the question), Sturgeon sets upon Davidson:

Let’s come back to this point about who is concentrating on these matters, and who [points at Davidson] at every opportunity, tries to shoe-horn in the reference to the constitution.

From there, Sturgeon walks the opposition through the last few days of her time as Scottish First Minister. From securing 300 new jobs in Glasgow. To discussions with leaders in manufacturing about reviving the sector. Then building a new social security agency. And fine-tuning a mental health strategy due for release the same day. The list goes on. Later, Sturgeon branches out to acknowledge the activities of her ministers across the spectrum of government. She closes:

So, I’ll take no lectures about the day job. It’s just a pity so much of our day job is spent cleaning up the mess made by a Tory government.

.@NicolaSturgeon on what getting on with the day job really means (including cleaning up Tory mess). #FMQs pic.twitter.com/Jhw9Agr7Q8

People have been sharing the moment from Holyrood widely, with many celebrating an over-confident Conservative Party being cut down to size. Along with the relentlessly Blairite Scottish Labour.

Well said @NicolaSturgeon – we are sick of the Tory government and snp cleaning up their mistakes! Long list of Tory failures! #snp #fmqs

– Read more from The Canary on Scottish Independence.