UKIP leader Paul Nuttall had no place being on Question Time last night. Now he wishes he wasn't [VIDEO] - Canary 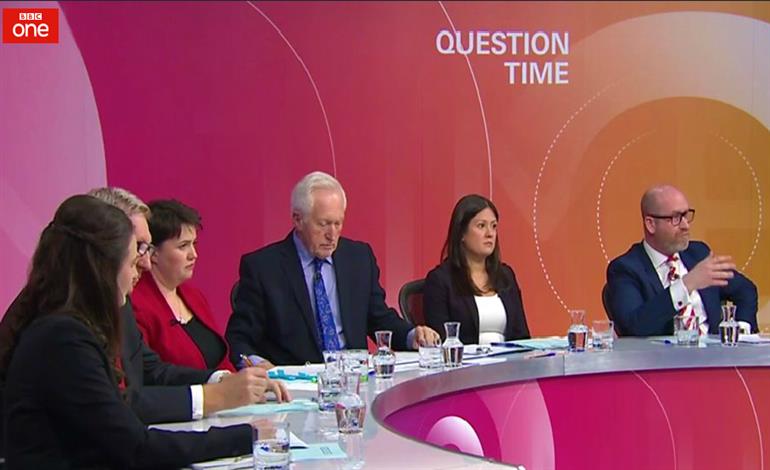 UKIP has no sitting MPs in the House of Commons, and are a diminishing force in UK politics. The producers of BBC Question Time continue to grant them more airtime than the likes of the Green Party (which does have a sitting MP). But the UKIP leader will be regretting it all today.

The Question Time venue this week was Carlisle. And the showdown began with an audience member taking a moment to revel in UKIP’s withering fortunes:

Paul, you’ve lost your only MP, you lost Stoke, you’ve even lost your cloth cap. There’s no future in it for you.

As the audience laughed and Nuttall shifted uncomfortably in his seat, union leader Len McCluskey picked up the thread.

I agree with the young man at the back. I think UKIP is finished…

The idea that UKIP represent the working class people of this nation is an absolute joke. It’s unions who represent workers. It’s UKIP who use workers.

And I’m gonna put a challenge to you, Paul. Because I wouldn’t like the audience or viewers at home to believe that Paul Nuttall represents my great city of Liverpool. A city that has, for decades and decades, welcomed people from all over the world.

So instead of being a carpetbagger in Stoke or Leigh or anywhere else, I challenge you to stand in Liverpool at the next election. And I tell you what: not only will you not win, you’ll lose your deposit.

UKIP was finished by Labour members a month ago in Stoke, and everyone – except, it seems, Paul Nuttall MEP – knows it #BBCQT pic.twitter.com/X4qRt9bkyv

UKIP is not your friend

Viewed as a political party, UKIP is in dire straits. But as a pressure group, it has achieved much. Britain is leaving the European Union. And the government has been able to steer policy well to the right, using the popularity of UKIP as an excuse. So it is not merely the party which must be defeated by liberals and the left, it is the ideological argument itself.

The reason UKIP uses workers is that it sells a false promise. It sells the lie that our depleted public services and welfare state are the result of immigration and EU mandates; that all we need to do is get control of our borders and it’ll be all shits and giggles. This is flat out nonsense. We are where we are thanks to the robber-baron policies of our own government. Not Brussels, not refugees, not economic migrants, not people of non-Christian faith groups, not the advancement of rights for women, LGBTQ people and others. None of that created the ideological austerity that plagues our economic system. And it is ideological austerity that placed working and non-working people alike in more precarious circumstances.

The Conservative government is creating a Brexit which will accelerate this process.

But the left-wing Brexit of greater democracy and protection from radical neoliberal austerity is never going to happen under this current government. May’s Brexit is about quite the opposite. The PM is more interested in dismantling hard-won rights. And cutting the taxes paid by wealthy individuals and corporations.

In order to protect Britain from the losses associated with leaving the single market, May’s government has confirmed it would turn Britain into a tax haven – cutting corporation taxes radically to attract business. May has also campaigned to withdraw Britain from the European Convention on Human Rights, and has steadfastly refused to guarantee working people’s rights after Brexit. The rights that ensure us all a minimum wage, maximum hours, and safe workplaces. The ones that all but ended sweatshop/workhouse conditions in the UK. Yet these rights may well end up on the chopping block as May courts corporations to stay in the country.

UKIP has enabled this. It has sold working-class Britain a lemon.

– Join a union which adds your voice to collective bargaining with employers.