The leader of the Scottish Conservatives compared Nicola Sturgeon to Margaret Thatcher. It did not end well for her [TWEETS] - The Canary 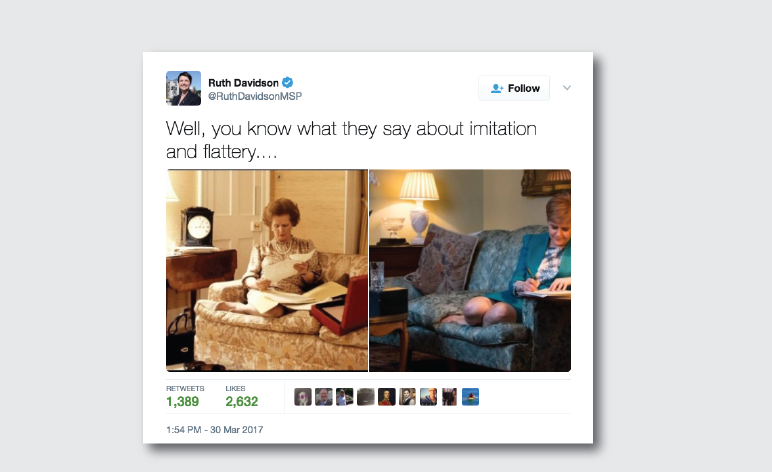 Yet despite having already failed at humour once this week, Davidson wasn’t done:

Well, you know what they say about imitation and flattery…. pic.twitter.com/R7SltrrWjW

Two can play that game

The problem with failing to land a joke on Twitter is that several people may pop up and help with your descent. Primarily by ensuring that it not only lands, but crashes and burns too:

. Ooooh this is a fun game! pic.twitter.com/Ts2LgbHwlb

.yay another match – this game is easy! pic.twitter.com/ZSSRpwtQrT

It was a game that Davidson, if anything, made too easy. Because if there’s one thing dictators like to do, it’s posing for photographs on tanks:

It’s also never a good idea to go full ‘Alan Partridge’ if you plan on later starting a meme war:

You basically shouldn’t do anything. Even something as simple as waving:

Or aggressively riding some sort of land-beastie in an attempt to strike fear into your opponents:

In normal circumstances, you might meet a failed attempt at humour with the phrase:

Stick to your day job!

But when someone’s day job is leading the Scottish Conservatives, they probably shouldn’t even do that.