Forget Russia. This Trump insider was working for a completely different foreign power. - The Canary 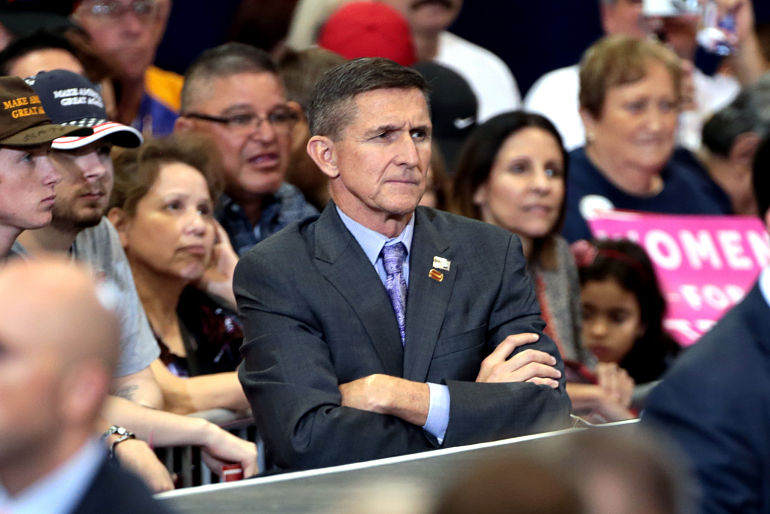 Retired US lieutenant general and former national security adviser Michael Flynn recently offered to testify about alleged links between Russia and US President Donald Trump. But the Senate Intelligence Committee rejected his request for immunity. As former attorney Seth Abramson has said, however:

Flynn’s immunity request very strongly suggests there was a criminal conspiracy at the highest levels of government.

With this in mind, it’s important to highlight another Flynn-related story which is receiving much less media coverage. A story about a foreign agent working on a secret intelligence project to support an authoritarian leader’s political ambitions. And it’s got nothing to do with Russia.

Flynn recently offered to testify about potential links between the Trump campaign and Russia. But he sought “assurances against unfair prosecution”. He himself resigned earlier this year when it came to light that he had not revealed his communications with the Russian ambassador. As The Canary has reported previously, his links with Russia appear to be extensive. Former MI6 spy Christopher Steele, for example, submitted a number of allegations on the links between Flynn (and others from Trump’s team) with Russia. And it now seems that Steele is prepared to testify to the US House Intelligence Committee.

But the controversy surrounding Flynn and Russia appears to be just the tip of the iceberg.

Flynn heads the Flynn Intel Group. And over a three-month period, this company received $530,000 in payments from Dutch-based company Inovo BV. The latter is registered to Ekim Alptekin, the head of the Turkish-US Business Council (TAIK/DEIK).

On behalf of Inovo, Flynn reportedly agreed to set up an “investigative laboratory”.

A foreign agent. But not for Russia.

In March 2017, Flynn retrospectively registered with the US Dept of Justice as a foreign agent, working on behalf of Turkey via Inovo. Suspicions of such links had previously arisen when, in November 2016, Flynn wrote what Vox has called “a bizarrely pro-Turkish op-ed… that basically read like a bald piece of Turkish propaganda”.

In January, Turkish Foreign Minister Mevlüt Çavuşoğlu met up with Flynn, at the Trump Hotel in Washington. Also present at the meeting was House Intelligence Committee chair and Republican congressman Devin Nunes, who is close to Donald Trump.

The purpose of the meeting was allegedly to arrange the ‘removal’ of Fethullah Gülen from the US. Turkey’s increasingly authoritarian President Recep Tayyip Erdoğan has long accused Gülen, who has lived in exile in Pennsylvania since 1999, of masterminding the July 2016 coup in Turkey and heading a ‘parallel government’.

“A covert step in the dead of night”

The plan to remove Gülen seemingly began in September 2016 at a New York meeting. Present were Flynn and Intel associates Alptekin and Rafiekian; alongside Çavuşoğlu and Turkish Energy Minister Berat Albayrak (Erdoğan’s son-in-law).

According to former CIA director James Woolsey, the talks examined ways of returning Gülen to Turkey extrajudicially. Later, Woolsey told [paywall] The Wall Street Journal that the plan was to make “a covert step in the dead of night to whisk this guy away”.

But Price Floyd, a spokesman for Flynn, is adamant:

At no time did Gen. Flynn discuss any illegal actions, nonjudicial physical removal or any other such activities.

In short, Flynn will definitely face questions about Russia if he eventually testifies (voluntarily or otherwise). But he may also have to speak about what Intel and Inovo were up to. And his testimony, combined with that of former MI6 spook Christopher Steele, could rock the very foundations of the US establishment.

For what is emerging may, one way or another, make the Watergate scandal look more like a picnic.

– Read The Canary‘s previous articles on Turkey and Donald Trump.