Blairite MPs have held a love-in with Tony Blair. And the results are hilarious - Canary 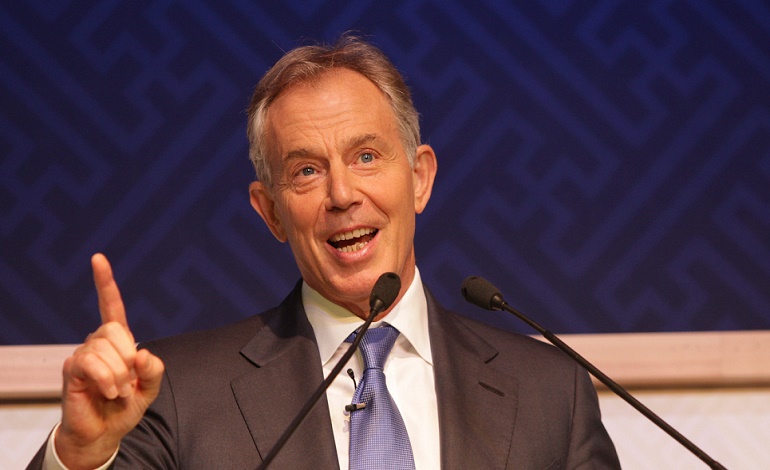 Tony Blair has given an interview to Labour Party pressure group Progress. Speaking to MPs Wes Streeting and Ruth Smeeth, he said that the “ultra-left” had taken control under Corbyn. And that, in doing so, New Labour’s record had been “denigrated”, which was “crazy”.

His responses would be hilarious. If they weren’t so deluded and lacking in self-awareness.

Blair said that his victory in the 1997 general election came off the back of Labour being in “the wilderness” since 1979:

We’d lost four elections and we’d been out of power for 18 years… We’d been through this big wilderness… By then the Labour party had decided that it wanted to come back to power… It wasn’t the ‘79 defeat that did for Labour really, it was the ‘79-’83 period when it looked like that ultra-leftist politics was taking over. That was what cratered the Labour party.

The ’79-83′ period Blair refers to was when Michael Foot was leader of the Labour Party. And he cites “ultra-leftist politics” as the reason for Foot’s battering loss to Margaret Thatcher. Conveniently ignoring what many commentators say was the real reason: Thatcher’s increased popularity due to the Falklands War. And ignoring the fact that, as author Andrew Crines has pointed out, Foot “was no radical Marxist”, and was actually part of Labour’s “moderate left”.

Blair claimed he had managed to rebuild Labour due to laying “the ultra-leftist thing… to rest”. And also showing the public that Labour “had a modern concept of social democracy”. Streeting and Smeeth acknowledged that this formula “will not translate to 2017”. But Blair said the solution is that:

You’ve got to develop a new progressive agenda for today’s world… The next generation of technology, artificial intelligence, automation, big data, it’s going to transform the workplace. What’s our answer to it? We don’t have an answer to that question, we’re nowhere.

The Progress MPs and Blair fail to acknowledge Jeremy Corbyn’s “10-point programme for Britain’s future”; his Digital Democracy strategy which deals with big data, new technology and digital procurement; his Energy and Environment policy which tackles ‘reskilling’ the workforce; and his consulting on Universal Basic Income in response to automation and the ‘gig economy’.

Stop getting excited about Corbyn!

Blair and the two Progress MPs noted that Corbyn has put “excitement” back into politics. But they said that “mass rallies” and “marches” are “not enough”. Maybe the fact that Labour is the largest party in Western Europe, or Corbyn being ranked as the members’ second most popular leader ever, is a better indication. (We should note here that the most popular Labour leader among members was Clement Attlee. And Blair came in at number six.)

The former Labour leader said he was proud of New Labour’s record, and implied that calling his government neoliberal was somehow untrue:

This idea that we were some neoliberal government. We made massive investments in health and education. When I left office in 2007, satisfaction levels with the health service were virtually at record levels, because of investment and the reform. That’s not a betrayal of principles, it’s the implementation of it.

Presumably, Blair had a straight face when he tried to quash the notion New Labour was neoliberal. Even though satisfaction with the health service was in part due to the implementation of the Private Finance Initiative [PFI]. Which has since helped to leave hospitals struggling with £300bn of debt.

Blair. A relic of a bygone era

Blair concluded by saying that, to keep Labour “relevant”, it needed:

Maybe if MPs like Streeting and Smeeth showed the same “urgency” in supporting Corbyn, the party’s polling might be better. Or if Blair, instead of criticising Corbyn at every turn, urgently gave his backing to the Labour leader, the party could really unite to fight the Tories.

But instead, Corbyn has seen two leadership elections and constant in-fighting and undermining from those in the party who would have him deposed. Blair’s unhelpful intervention only serves to remind us of everything wrong with the New Labour project: self-serving, greedy and kowtowing to the banks and multinational corporations.

Corbyn is not perfect. But if he was an experiment compared to Blair, then New Labour and its architect are the ones that should be consigned to the dustbin of political history.

– Read more from The Canary on Corbyn.