BBC News at Six last night was a revelation. Because it proved the broadcaster can get it right - Canary 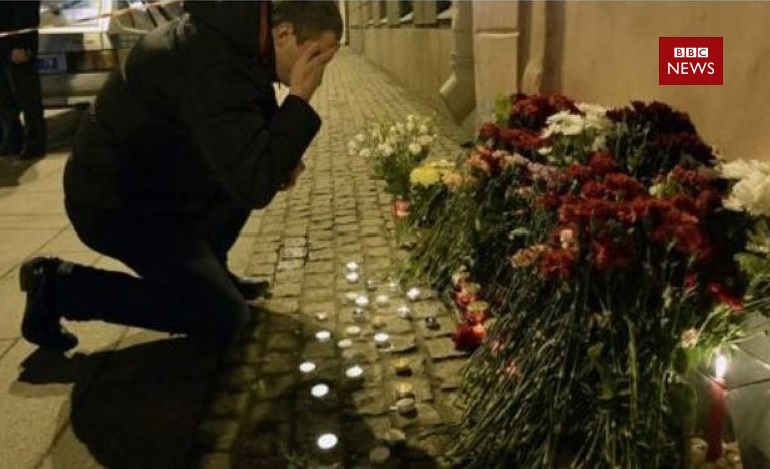 BBC News at Six on 3 April was revelatory. Because it proved the public broadcaster can get it right. And only two weeks ago, a Guardian journalist slammed the BBC for getting it wrong on the exact same issue.

So has the BBC had a change of heart? Or is this seeming transformation just more cynicism in action?

On 3 April, an explosion happened in St Petersburg, Russia. A bomb exploded on the metro system in the city, killing 14 people and injuring another 49. A further bomb was found at another station. But it did not explode:

On News at Six, the BBC led with the “metro blast”. And it spoke about the incident for less than five minutes at the start of the programme.

This is in stark contrast to the rolling coverage it gave to the Westminster attack on 22 March. Its excessive reporting on that attack led Guardian journalist Simon Jenkins to assert that the BBC had “opted… with the terrorist”. He explained:

You have a choice of prominence. The prominence given to them [terrorist] now, I think, is aiding and abetting terrorism. I really feel that. You should choose to treat it as a crime.

What preceded the attack?

There was something else very striking about the BBC coverage of the St Petersburg attack. After explaining what had taken place, the BBC turned its attentions to Russian President Vladimir Putin. It said that Putin had described the attack as a “tragedy”. And that he had stated the investigation would look into “all explanations” for the cause of the explosion. But News at Six then explained:

It’s now 18 months since President Putin authorised airstrikes in Syria. An operation he said was to fight terrorism.

The BBC also detailed that there were Russians who had travelled to fight with Daesh (Isis/Isil); and that Putin wanted to stop them returning to Russia and planning attacks. This narrative was accompanied by images of fighter jets taking off, missiles then dropping from these planes, and the subsequent explosions on the ground.

Context for some, not for others

In short, the BBC gave context to the St Petersburg attack. But that is not necessarily the case with other incidents; ones that happen to the UK and its allies. How many times in its vast coverage of the Westminster attack, for example, did the BBC reference the actions of the US-led coalition, of which the UK is a part, in Syria and Iraq? A coalition which has reportedly killed increasing numbers of civilians in recent weeks.

At the same time, the public broadcaster didn’t go overboard with the time it gave to coverage of the tragedy.

If the BBC applied the same logic (on both counts) to attacks that happen in the West, we’d all be better off.

But perhaps that’s not the sort of narrative the BBC feels it should deliver to the British people. About Britain, that is.

– Find out what’s going on in the world with The Canary Global.